Protesters in Ferguson pressed pause Thursday to observe the Thanksgiving holiday, gathering for church services and turkey giveaways in marked contrast to the previous days' outrage over the grand jury decision not to indict a police officer in the shooting of unarmed black 18-year-old Michael Brown

No police or Missouri National Guard members stood sentry outside the Ferguson police station, where people have gathered to protest — sometimes violently — since Monday night's announcement that white Ferguson police officer Darren Wilson would not be indicted in Brown's Aug. 9 shooting death.

Protests have taken place across the country since the jury's decision was announced in a case that has fuelled passionate debates over relations between black Americans and law enforcement.

On the lightly travelled main street through Ferguson's downtown Thursday, efforts were under way to beautify the city, where dozens of buildings were damaged or destroyed by fire on Monday. Amid freezing temperatures and occasional snow flurries, groups painted designs on plywood that covered businesses' windows – in many cases as protection against vandals. A handful of others attended a church service, where a pastor pledged prayer for families of Wilson and Brown.

About a 100 people marched in a light snow Wednesday night, with no major confrontations or property damage, and only two arrests. Troops with rifles were posted at intersections and parking lots in an area where stores were looted and burned.

Meanwhile, business owners and residents covered up broken windows, cleared away debris and hoped that the relative calm would last into the Thanksgiving holiday.

In the St. Louis suburb's historic downtown, about a dozen people painted over boarded-up windows on businesses.

"This is my Ferguson, you know?" said Kari Hobbs, 28, as she watched 17-year-old Molly Rogers paint "Love Will Win" in bright pink on a board that covered a smashed window at Cathy's Kitchen, a restaurant not far from the Ferguson Police Department.

There were no seats inside Cathy's Kitchen, and a line had formed at the back of the building. A diverse mix of residents, business people with the day off and journalists covering the protests enjoyed a pre-Thanksgiving lunch.

Jerome Jenkins, who runs the restaurant with his wife, Cathy, said he never considered closing his doors.

"It really wasn't about wondering if the building would get torched or not," Jenkins said. "Me and my wife, we expected it to get damaged … we decided to go home, and we would live with whatever fate would give us."

He said it was protesters who helped protect his business during Monday night's chaos, when a dozen commercial buildings were burned to the ground.

"The criminals, the looters, whatever you want to call them: They're not protesters. They wanted to vandalize the place," Jenkins said. "And the protesters locked arms together, and they surrounded our place and … told them, 'No, you're not going to touch this place.' " After the City Hall outburst, police locked down the building and called in more than a hundred extra officers. Three people were arrested.

An influx of National Guard troops on Tuesday helped contain the protests, although there were still nearly 60 arrests, and demonstrators set fire to a squad car.

On Wednesday night, a crowd of protesters lingered outside the Ferguson Police Department, shouting at Guard troops as light snow fell. About 100 people marched through a major intersection and blocked traffic, but the disruption lasted only a few minutes.

Troops with rifles were posted at intersections and parking lots in an area where stores were looted and burned Monday into Tuesday.

Since the grand jury's decision was announced, demonstrators have been active in other cities throughout the United States.

Most of the protests have been peaceful, but others have been more unruly, including a demonstration in Oakland, Calif., in which protesters vandalized several businesses and another in Minneapolis where a car struck one protester and drove into a crowd of others.

In Los Angeles, police in riot gear arrested dozens of demonstrators who refused to disperse after disrupting traffic as they headed toward the county jail and the Staples Center arena.

In Portland, police used pepper spray and made arrests after about 300 people interrupted bus and light rail traffic.

Also Wednesday, authorities said a 20-year-old man whose body was found inside a car in Ferguson after Monday night's riots had been intentionally set on fire.

The death of Deandre Joshua of University City is being investigated as a homicide, but police have not said whether it's connected to the violence that broke out after the grand jury announcement.

Joshua's body was found Tuesday morning at the wheel of a car parked near the apartment complex where Brown was killed. An autopsy determined that he was shot once in the head. 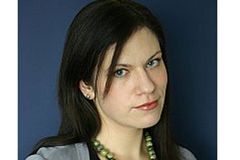 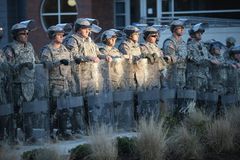 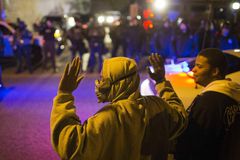 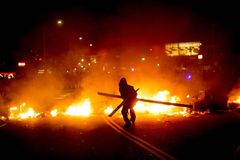 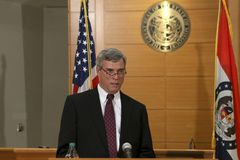