Russian investigators are said to be looking at several possible motives for the murder of Boris Nemtsov, shot dead Friday in the centre of Moscow. None, apparently, are related to the fact that the 55-year-old former deputy prime minister was one of President Vladimir Putin's most determined and outspoken opponents.

The tens of thousands who joined a memorial march through the Russian capital on Sunday had no qualms making the connection Russia's police dare not. The country's opposition – already tiny, now terrified – is convinced it was Mr. Nemtsov's politics that got him killed. "Russia without Putin!" many chanted as they walked. Others held a long banner reading "these bullets were meant for each of us."

Though Mr. Nemtsov, in his last interview with The Globe and Mail, compared Mr. Putin to a "mafia boss," few believe the Russian President, or anyone close to him, would have ordered the gangland-style execution.

Put bluntly, the Kremlin didn't need to kill Mr. Nemtsov. He and the rest of Russia's opposition were already marginalized, unable to make a dent in Mr. Putin's sky-high popularity, particularly as nationalist passions rise in connection with the war in eastern Ukraine.

But it's that wartime, with-us-or-against-us atmosphere in Russia – something the Kremlin created and fed – that many believe lead to Mr. Nemtsov's murder. Kremlin-owned media have spent much of the past decade telling Russians that their country is surrounded by enemies. Enemies with traitorous allies in Moscow.

A year ago, when Mr. Putin addressed a joint session of the Duma to announce Russia's annexation of Crimea, he devoted a sizable chunk of his otherwise celebratory speech to assessing the opposition Russia would face to its move to "reunite" with a chunk of Ukraine. (A move that Mr. Nemtsov was one of very few Russian politicians to openly criticize.)

The West, Mr. Putin predicted, would respond to Russia's move not only with sanctions, but by trying to provoke unrest inside Russia. "Action by a fifth column, this disparate bunch of national traitors," he called it.

Mr. Putin didn't name those he considered traitors, but several Russian-language websites quickly made lists of "fifth columnists," with Mr. Nemtsov always near the top. Meanwhile, Kremlin-owned TV channels repeatedly broadcast, and made dark insinuations about, footage of a visit that Mr. Nemtsov and other opposition activists paid to the U.S. embassy in Moscow in January, 2012.

It's easy to see how a hard-core nationalist – the kind Russia has been encouraging to go "volunteer" in the war in eastern Ukraine – might have thought he was doing his country a favour by shooting Mr. Nemtsov as he walked across the Bolshoi Moskvoretsky Bridge with his Ukrainian girlfriend on Friday night.

"If we can stop the campaign of hate that's being directed at the opposition, then we have a chance to change Russia. If not then we face the prospect of mass civil conflict," opposition politician Gennady Gudkov said before Sunday's memorial march. About 30,000 people attended the march, making it the largest opposition rally in more than a year.

Many in Russia noted that Mr. Nemstov was killed on Feb. 27, a day that Mr. Putin had only recently declared to be a new holiday – Special Forces Day – coinciding with Russia's initial covert deployment of troops in Crimea last year. Before his death, Mr. Nemtsov had been working on a report he told friends would prove Russia's direct involvement in the war that subsequently erupted in two other regions of Ukraine, Donetsk and Lugansk, an allegation the Kremlin heatedly denies.

No suspects had been named in the case as of Sunday night, despite the fact Mr. Nemtsov was killed in one of the most heavily policed and monitored parts of Moscow.

The theses under official examination include a possible Ukrainian link to the killing, as well as the seemingly outlandish theory that it might have been a revenge attack by Islamist extremists angered by Mr. Nemtsov's (almost completely unreported) stance regarding the French satirical newspaper Charlie Hebdo. Police were also said to be looking into conflicts in Mr. Nemtsov's business and personal life, dark hints about which were floated onto Russian-language websites even as Mr. Putin was officially offering his condolences to Mr. Nemtsov's family.

There were also the predictable insinuations that the United States and the CIA were somehow involved.

"Shooting Nemtsov, aiming at Putin," was the headline on the website of the bestselling Komsomolskaya Pravda, which went on to suggest the murder might have been carried out by the Russian opposition itself as a way of bolstering its sagging fortunes. Or maybe, Komsomolskaya Pravda suggested, it was the "Kiev junta," as Russian media often calls the post-revolution government of Ukrainian President Petro Poroshenko. Or, of course, it could have been the CIA.

"This is the so-called 'sacred victim' that is necessary for all textbook revolutions," Kremlin adviser Sergei Markov wrote on his Facebook page. Mr. Nemtsov's killing, he said, was preparation for a "Russian Maidan" – a Western effort to replicate Ukraine's revolution in Moscow.

As wild as that theory may sound to Western ears, it seems to be shared all the way to the top in Russia. Within hours of Mr. Nemtsov's death on Friday, a Kremlin spokesman said Mr. Putin viewed the murder as a "provocation."

And so Mr. Nemtsov's friends blamed his death on the air of hatred and fear in today's Russia. And the Russian state apparatus responded by upping the ante, by once more directing blame at traitors and their foreign friends.

In other words, more hatred and fear.

"There is no one controlling the process any more … there is chaotic hatred. Hatred that is fuelled every day by the federal mass media," opposition journalist Ksenia Sobchak, a close friend of Mr. Nemtsov's, wrote on her blog. "These are only the first six bullets. There are troubled times ahead." 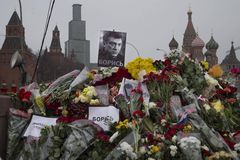 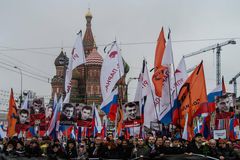 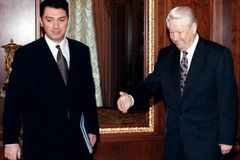