Fierce clashes erupted Tuesday on the outskirts of Damascus as elite troops loyal to the embattled Syrian regime used tanks and heavy artillery against rebels.

Only rarely since the uprising against President Bashar al-Assad broke out 16 months ago has fighting raged so close to Damascus, the capital that has stayed largely loyal to the regime.

"This is the first time that the regime has used artillery in fighting so close to the capital," Rami Abdel Rahman, head of the British-based Syrian Observatory for Human Rights, told Agence France-Presse.

As the heavy gunfire boomed near Damascus, NATO nations met in an emergency session and condemned Syria for shooting down a Turkish warplane, pro-Assad factions set up roadblocks in Beirut, and Russia announced its foreign minister would fly to Geneva for a weekend conclave that might be a last chance for a brokered end to the civil war now engulfing Syria.

The fighting outside Damascus, barely eight kilometres from the city's ancient souk and modern downtown core, was close to elite Republican Guard bases in the suburbs of Qadsaya and al-Hama. Those crack troops, commanded by Mr. al-Assad's younger brother Maher are among the best-trained, best-equipped and – presumably – most loyal to the Alawite-dominated regime. For rebel forces to battle the Guards close to their main bases is unprecedented and may be an indicator of increasing prowess among the insurgents seeking to topple the Assad regime.

Mr. al-Assad on Tuesday declared that his country was at war and ordered his new government to spare no effort to achieve victory. "We live in a real state of war from all angles," he said in a rambling speech that was broadcast on state television. "When we are in a war, all policies and all sides and all sectors need to be directed at winning this war."

In Beirut, militia fighters who support the Syrian regime – which controlled much of Lebanon for decades – erected roadblocks and burned tires early Tuesday. Bursts of gunfire were heard apparently in protest against the arrest of a man accused of firebombing a TV station critical of Mr. al-Assad.

Fears persist that Syria's violence will spill over into Lebanon where sectarian fault lines cleave the society.

The United Nations, meanwhile, said its unarmed observer mission would remain suspended and the several hundred military officers shuttered on base because the spreading violence made it too dangerous to attempt to monitor the supposed ceasefire.

After an emergency meeting in Brussels, NATO allies, including Canada, condemned "in the strongest terms" the Syrian regime for shooting down a Turkish warplane last Friday.

But the 28-nation alliance opted only to voice "solidarity" with Turkey rather than making any powerful symbolic gestures, such as deploying one or more of the alliance's command-and-control aircraft to Turkey.

In their statement of condemnation, allies called the shoot-down "another example of the Syrian authorities' disregard for international norms, peace and security, and human life," said Secretary-General Anders Fogh Rasmussen.

The two-man Turkish air crew, a pilot and a systems officer, are missing and presumed dead.

"It's my clear expectation that the situation won't continue to escalate," Mr. Rasmussen said.

However, with no UN Security Council mandate, no call for intervention from the Arab League, grave concerns that the opposition may include radical Islamists, and a much more complex neighbourhood including Israel and Iran, the risks of igniting a wider war have dampened Western interest in helping topple the Assad regime.

Bolstered by NATO's vow of solidarity, Turkish Prime Minister Recep Tayyip Erdogan warned that any Syrian aircraft, ship or army unit approaching the Turkish frontier would be treated as a threat and attacked.

The Prime Minister has sought to sound resolved while avoiding any direct military retaliation in the wake of the shooting down of the U.S.-built Phantom F-4, which given its flight profile, was likely conducting a clandestine reconnaissance patrol off Syria's coast.

"Everybody should know that Turkey's wrath is just as strong and devastating," Mr. Erdogan said Tuesday in a speech to parliament.

One glimmer of hope for a brokered end to the war emerged Tuesday when Moscow announced Foreign Minister Sergei Lavrov would go to Geneva this weekend. UN envoy Kofi Annan wants all five permanent Security Council members – Britain, France, China, Russia and the United States – to attend in an effort to revitalize his moribund peace effort.

Iran, Syria's closest ally, may also be invited. For Moscow, another key Syrian ally, to announce it was sending Mr. Lavrov adds gravitas to the effort. For the United States – at loggerheads with Iran over its nuclear program – to accept a broker role for Tehran over the Syrian crisis would represent a significant diplomatic breakthrough and underscore the seriousness of the situation.

Amnesty International said Tuesday three medics were tortured and killed in Syria a week after their arrest in the city of Aleppo in what it said was an "appalling disregard" for the profession.

All three men were students at Aleppo University and "were part of a team of doctors, nurses and first-aiders who have been providing life-saving medical treatment in makeshift 'field hospitals' set up to treat demonstrators shot by security forces." They could not therefore go to state-run hospitals for fear of being arrested, tortured or even killed, th group said.

The three medics had been detained by Air Force Intelligence since their arrest in the city on June 17. Amnesty said the three students' burned bodies were found in the early hours of Sunday in a burned-out car in the Neirab area of Aleppo's northeastern outskirts. 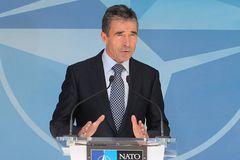