Growing up in the former Yugoslavia, Svetozar Rajak remembers 1963 as the year his family bought their first television. His other clear memory from that year is staring at that same TV in shock as a newsreader announced the assassination of John F. Kennedy.

"Although Yugoslavia was nominally a Communist country, there was so much coverage. People were talking about [the assassination] as a very momentous event," Mr. Rajak said. Just six years old at the time, he was mesmerized three days later by the sombre public funeral in Washington, which his family's neighbours assembled to watch at their house, near what is now John Kennedy Street in Belgrade.

That life ground to a halt even in Josip Tito's Yugoslavia illustrates the global stardom Mr. Kennedy achieved in his just under three years as President of the United States, and the transnational shock and anxiety that followed his death.

Fifty years on, Mr. Kennedy's life is being remembered across Europe, where he left almost as big a mark on imaginations as he did in the U.S. Starting in April, Berliners celebrated the 50th anniversary of his famous "Ich bin ein Berliner" June, 1963 speech with a series of exhibitions near John F. Kennedy Platz.

In June, Ireland inaugurated a John F. Kennedy Trail, tracing the four-day visit to the country by the first U.S. President of Irish and Catholic descent.

The shock was felt beyond Europe. Crowds wearing white, the colour of mourning, mobbed a memorial service in India. Japanese wept on the streets. In the Middle East, Yemenis streamed to the embassy for three days to sign a condolence book. A U.S. diplomat based in Colombia recalled seeing candles burning in memory of the slain president across the countryside, as far as the eye could see.

Western Europe related to Mr. Kennedy much the way North Americans did, captivated by his youth and charisma, fascinated with the glamour of the Camelot era in U.S. politics – all of which contrasted sharply with the older, staid postwar order in Europe.

"There was a sense that Britain was being led by old men who were stuck in the past, and we needed leaders like Kennedy who were young and forward-looking and full of hope," said Iwan Morgan, professor of United States studies at University College London. "I think that was true in a lot of Western Europe. Kennedy symbolized a passing of the torch. Of all the Western leaders, he had the broadest, greatest international appeal. Then, the hope was snuffed out."

Something that died along with Mr. Kennedy was the idealistic image many in Europe had of the U.S. as the "leader of the free world." As the murder lingered unresolved – giving oxygen to countless conspiracy theories – Mr. Kennedy's successor, Lyndon Johnson, led the U.S. deeper into the Vietnam War, a conflict that made many young Europeans – the generation that had believed in Mr. Kennedy – deeply cynical about the U.S., a feeling that has only deepened in subsequent decades.

Parts of Eastern Europe, locked in a Cold War struggle with the U.S. and NATO, were just as enamoured as the West with Mr. Kennedy. But they were drawn less by his telegenic image than his policies and the fresh air he breathed into international relations.

Although Mr. Kennedy's presidency included one of the most dangerous periods in the Cold War – the 1962 Cuban Missile Crisis – its peaceful resolution looked good on the American president. In the aftermath, he and Soviet leader Nikita Khrushchev each sought détente, establishing a direct hotline between the White House and the Kremlin, and signing the first treaty limiting the testing of nuclear weapons.

The shots fired at Mr. Kennedy's motorcade in Dallas threatened to undo all that. There were fears that the bullets were aimed at those who sought peace between East and West. The murder "was perceived as [though] a big change in the American attitude toward the rest of the world was interrupted," said Mr. Rajak, now a Cold War historian at the London School of Economics. "The world lost a leader who could have eased Cold War tensions."

Moscow was greatly shaken by the killing. Records show the Kremlin – uncertain who had killed Mr. Kennedy or what their agenda was – worried there would be an attempt to blame the Soviet Union. Mr. Kennedy's assassin, Lee Harvey Oswald, had spent three years living in the city of Minsk (although his application for Soviet citizenship was denied) and he married a Soviet citizen.

The telegrams sent by the Soviet Embassy in Washington display nervousness over the evolving narrative in the U.S. media following the assassination, which began to focus on Mr. Oswald's Soviet connections. "Radio and television, which have interrupted all other programming and are broadcasting only reports relating to the murder of the President, are alluding more and more often to the fact that the assassin was evidently connected with 'extreme leftist elements,'" reads a telegram sent to Moscow on Nov. 22 by Anatoly Dobrynin, the Soviet ambassador to Washington.

What follows in the KGB files – which Boris Yeltsin finally handed to Bill Clinton in 1999 – is voluminous daily telegram traffic as the Kremlin instructed diplomats to convey sorrow at Mr. Kennedy's death, and to share what they knew about Mr. Oswald and his time in Minsk (within boundaries: a New York Times correspondent was denied permission to visit Minsk to investigate Mr. Oswald's time there). Throughout the papers, there are references to what was referred to as the "provocation," a perceived effort by unknown actors to frame the Soviet Union for the murder.

The Soviet leadership comes across as stunned by the killing, and historians say Mr. Khrushchev personally mourned Mr. Kennedy's death. The two men had learned during the Cuban Missile Crisis to trust each other in a way that no other U.S. and Soviet leaders would until Ronald Reagan and Mikhail Gorbachev.

The missile crisis "made Khrushchev feel that this ideological opponent of his, his main rival in the Cold War confrontation, was in fact his closest comrade-in-arms who he had worked hand-in-hand with to save the world from a nuclear catastrophe," said Sergey Radchenko, public policy scholar at the Woodrow Wilson Center in Washington. "Khrushchev felt a genuine sense of sorrow upon Kennedy's death."

The Soviet media's routine of caricaturing every American president as a villain meant that Mr. Kennedy's charisma was somewhat lost on the broader Soviet population. Moscow is rare among European capitals in that it lacks any kind of monument to Mr. Kennedy (there are also few to Mr. Khrushchev, who fell from power less than a year after Mr. Kennedy's death). But some of the great orator's words penetrated even the Iron Curtain.

Mr. Radchenko says he recently saw a Kennedy quote on a banner meant to inspire troops working the border between Russia and Mongolia: "Ask not what your country can do for you, ask what you can do for your country."

Kennedy’s love for convertibles made him an easy target
November 21, 2013 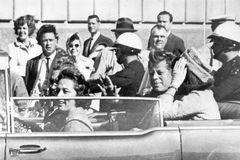 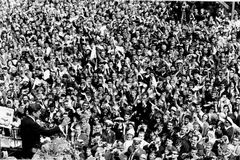 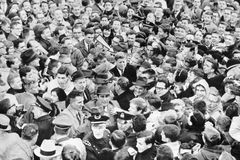 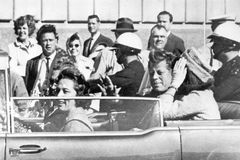 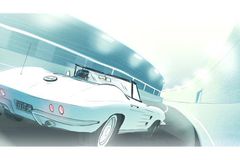 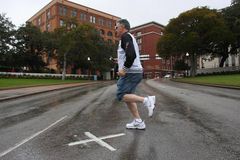 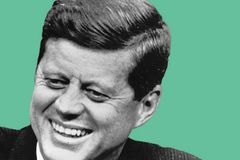 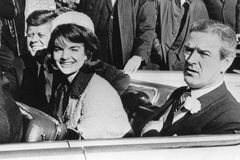