Intense fighting flared Monday as Turkish troops and their allies advanced on a Kurdish enclave in northwestern Syria, the third day of Ankara's offensive to oust a U.S.-allied Kurdish militia from the area, according to the militia and a war monitoring group.

Skirmishes between Turkish troops and Kurdish fighters also broke out farther east in Syria, threatening to widen the scope of the new front in the Syrian war that pits Turkey against Washington's main ally in the region.

The Turkish ground and air offensive on Afrin, codenamed "Operation Olive Branch," began Saturday, raising tensions in the already-complicated Syrian conflict and threatening to further strain ties between Turkey and the U.S., both NATO allies. Turkey says it aims to create a 30-kilometre (20-mile) deep "secure zone" in Afrin, the Kurdish-controlled enclave on its border.

The Turkish military announced late Monday its first fatality to the operation. It said a soldier was killed in cross-border raid.

The UN Security Council was scheduled to convene later Monday to discuss the situation.

A NATO statement said it has contacted Turkey over the offensive. NATO said Turkey has suffered from terrorism and has the right to self-defence but urged Ankara to do so in a "proportionate and measured way."

NATO also said it has no presence in Syria but that as members of the anti-Islamic State coalition, "our focus is on the defeat" of the extremists.

U.S. Defence Secretary Jim Mattis said Turkey has "legitimate security concerns" about Syria. Speaking to reporters travelling with him Sunday to Indonesia, he said diplomats are working on a solution to Turkey's confrontation with the Syrian Kurdish fighters, known as the People's Defence Units or YPG, who have been the key U.S. military ally in battling the Islamic State in Syria. Turkey considers the YPG a terrorist group because of its ties to its own Kurdish insurgency.

The U.S. has offered direct military and logistical support to a Kurdish-led group known as the Syrian Democratic Forces that spearheaded the fight against IS in Syria. With the near total defeat of IS in both Syria and Iraq, the U.S. said it would create a 30,000-strong border force of existing Kurdish and Arab SDF members to ensure there would be no IS comeback.

That announcement has outraged Turkey, and Secretary of State Rex Tillerson has tried to walk back the U.S. position, saying it was portrayed incorrectly. The U.S. focus in recent years has been on eastern Syria. The area west of the Euphrates River, including Afrin, has been more of a problem for the U.S. because Turkey had said it would not accept a Kurdish military presence there.

The U.S. is discussing with Turkey and others the possibility of setting up a security zone on the Syria border to address Turkey's concerns about a Kurdish enclave there, Tillerson said while travelling in Europe on Monday. Such a zone could help stabilize the situation and meet Turkey's legitimate concerns over security, he said.

The U.S. recognizes Turkey's "legitimate right" to defend itself from terrorists, he said, but added that Washington wants Turkey to try to be precise in its Afrin operation and to limit it by showing restraint.

But Turkish President Recep Tayyip Erdogan has promised to expand the operation, threatening to push farther east to the town of Manbij to the east, which the Kurdish fighters had liberated of Islamic State militants in 2016 and currently administer.

Erdogan said in Ankara that his country will "not take a step back" from its Afrin offensive. He repeated his criticism of Washington's support for the Kurdish militia, saying the U.S. should have partnered with Turkey in fighting IS.

The Kurdish force said it considers Turkey's offensive a "flagrant hostility" to all Syrians that would distract from the fight against the extremists and help them flourish. In a statement, the Kurdish fighters said Afrin will be a "quagmire" for the Turkish army.

Activists say Turkey has mobilized about 10,000 Syrian fighters to storm Afrin, with some stationed in Azaz, on the eastern edge of Afrin and others to the south in Atmeh. There are an estimated 8,000 to 10,000 Kurdish fighters in the enclave, home to about 800,000 civilians.

Christians and Yazidis living in Afrin fear persecution by the advancing Turkish-led forces, which they say include "jihadist groups," said Irfan Ortac, chairman of the Yazidi Association in Germany.

The Yazidi community in Syria, a religious minority, lives mostly in Kurdish-controlled areas. Ortac estimated at 15,000 Yazidis live in Afrin.

The top UN official in Syria, Ali Al-Za'tari, said the international body is closely following events and is ready to help civilians who might leave the enclave. Al-Za'tari told The Associated Press it is not yet clear if people are fleeing the fighting in northwestern Syria.

Fierce clashes were occurring along two new fronts as Turkish troops and allied Syrian opposition fighters tried once again to enter Afrin. The Kurdish militia said it has repelled advancing troops from Shinkal and Adah Manli, two villages they seized a day earlier in Afrin.

Afrin is surrounded by Turkish-backed Syrian fighters, Turkish troops and Syrian government forces. The only road out of the enclave to government-controlled Aleppo has been closed by the Kurdish militia for security reasons.

The YPG said the Turkey-backed forces have opened a new front, pushing into two other villages in the district's north. The militia said it is fighting to halt the advancing troops in Balia and Qarna in northwest Afrin.

AP journalists at Hassa, a Turkish village on the border, saw at least eight tanks and five armoured vehicles along with trucks preparing to cross into Syria.

The Britain-based Syrian Observatory for Human Rights, which monitors the Syrian war, said the Syrian Kurdish militia waged a fierce counteroffensive late Sunday, repelling the Turkish troops and allied Syrian fighters from the two villages they briefly captured. The Observatory said Turkey-backed troops were trying once again to enter Afrin.

Access to Afrin is restricted, making it difficult to independently verify developments.

Tensions also spread to eastern Syria, where Kurdish and Turkish media reported a cross-border exchange of fire hundreds of miles east of Afrin.

The Observatory reported the skirmishes and said there also were reports of an exchange of fire to the west, where the private Dogan news agency said a Turkish soldier was wounded by a sniper in Ras al-Ayn. The Turkish military, along with special operations teams, returned fire on the building with anti-aircraft weapons and "neutralized" the sniper, Dogan reported.

The Kurdish militia has blamed Russia for the Afrin attack, saying Russian officials have urged it to hand over the enclave to the Syrian government to avoid the Turkish offensive. Russian troops stationed in Afrin district had redeployed ahead of the Turkish offensive, which also includes airstrikes. At least 18 civilians have been killed in Afrin, the Observatory said. One Syrian refugee was killed in a Turkish border town after rockets were launched from Syria.

Dmitry Peskov, spokesman for Russian President Vladimir Putin, said Moscow is "carefully watching the operation" and is in touch with both the Syrian and the Turkish government.

Erdogan has warned Kurds in Turkey not to protest the military operation. Police broke up protests Sunday in Ankara and Istanbul, with at least 12 detained in Istanbul. Police used tear gas to disperse a rally in Ankara. 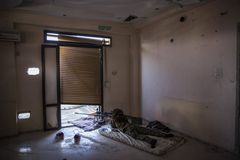