When she left her home in war-torn Sudan a few years ago, Esra Khaleel found herself on a small campus near one of South Africa's most famous beaches, where she could see the surfers and sunbathers from the windows.

But she never learned to swim. She was too focused on her work at the innovative new African science institute, where she eagerly explored the mysteries of the universe.

"The environment was 24-hour studying," she marvels. "You felt so good, you didn't feel tired – you just wanted to study. Sometimes we couldn't even sleep from the excitement."

Ms. Khaleel, who grew up in impoverished Darfur on the eve of a devastating civil war, had never been outside Sudan and had never spoken English before her arrival here. Today, thanks to her formative year at the African Institute for Mathematical Sciences, she is completing her doctorate in nuclear physics at a South African university and has spent time with Stephen Hawking, the famous physicist.

The computer laboratory at AIMS is filled with young men and women from across Africa who often study and work together until 2 or 3 a.m. before finally crashing in their dormitory rooms on the floor above. Until coming to AIMS, most were frustrated by the rote memorization methods of their classes at underfunded African schools. "We were so hungry to learn," remembers Thifhelimbilu Singo, another recent graduate who is now completing a PhD in nuclear physics at nearby Stellenbosch University.

The institute, created in a former hotel in the beach town of Muizenberg near Cape Town in 2003, has produced 360 graduates from 31 African countries over the past eight years. Almost all have gone on to graduate degrees at universities around the world, and many are planning to return to their homelands to apply their knowledge to help solve Africa's social and economic problems, from energy shortages to malaria transmission.

The institute is now rapidly expanding across the African continent, with $20-million in assistance from the Canadian government. A new branch has just opened in Senegal, and another is opening in Ghana next year, with Ethiopia and Tanzania likely to get the next branches. In total, the institute hopes to have 15 campuses across Africa by 2020.

The project is known as the "Next Einstein Initiative." The belief is that the world's next Albert Einstein could just as easily be found in Africa as anywhere else – if the educational opportunities exist.

In science and math, the gulf between Africa and the developed world is huge. Nearly a million students graduate from African universities every year, yet advanced scientific education is virtually unavailable, and the brightest students tend to leave Africa to work in Europe or North America. Only about 1 per cent of the world's patents and scientific articles are from African-based researchers, and there are only two mathematics journals in the whole continent.

"When I meet the students, I see the richness that the world is losing by not having more African scientists," says Carolina Odman-Govender, director of academic development for the Next Einstein Initiative.

"There's so much potential that's unseen and untapped. There are all these people who are brilliant but haven't had a chance to shine. Many of them have never left their country before, never even flown before."

Ms. Odman-Govender, a Swedish astrophysicist, was a teaching assistant at AIMS in its early days and later decided to return full-time. "It makes more sense to do science here than anywhere else because the impact is so much greater," she says. "It's a life-changing experience. You see them exceed the expectations every day."

The founder and chairman of the institute is Neil Turok, a renowned physicist and long-time collaborator with Mr. Hawking. Born in South Africa to anti-apartheid activists, he now works in Canada as director of the Perimeter Institute for Theoretical Physics in Waterloo, Ont.

Mr. Turok believes the AIMS institute can contribute to an "African renaissance" by helping to overcome decades of underfunding and isolation at the continent's universities. "Just think what will happen if Africa does for science what it has done for music, for literature and for art," he wrote in The Globe and Mail last year. "Not only Africa, but the world could be transformed."

Every year, about 50 to 60 students are accepted at the South African AIMS campus from all over Africa. A minimum of one-third are female. Nearly as many are accepted at the Senegal campus, and similar numbers are expected at future campuses in other African countries.

The 10-month program at AIMS includes intense classes in computer skills, language and mathematics. Competition to enter the institute is fierce: Only one of every five applicants is successful. They are truly the best and brightest of Africa's science and math students.

Once they are accepted, tuition is free and travel costs are covered. They are given free accommodation and meals in the same building as their classes, allowing them to focus entirely on their studies. "They need to do their own laundry, and that's about it," Ms. Odman-Govender says. "And we provide the laundry machines and detergent."

The professors and lecturers are volunteers, including Nobel Prize winners and other top scientists and mathematicians, who visit the AIMS campus for three-week teaching stints for a modest stipend. One of the key benefits of the institute is that the students can build a lifelong network of friends among their professors and fellow students, since they are together at meal times as well as in the laboratory and classroom.

"That's the magic of AIMS," says Bruce Bassett, a professor of cosmology and mathematics at the institute and at the University of Cape Town. "The students are networking. They're eating with their professors and having a beer with them and working with them at 2 a.m. As a model, it's brilliant." 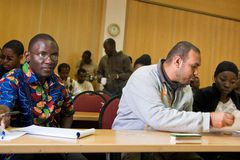 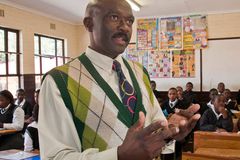