The owner of a seaplane that crashed near Sydney during a New Year's Eve joy flight, killing the pilot and his five British passengers, said Wednesday that flight path was not authorized and the pilot's final manoeuvre was inexplicable.

The Australian Transport Safety Bureau on Wednesday released a preliminary report on its investigation into the cause of the crash into the Hawkesbury River. It rules out a bird strike, contaminated fuel and the plane breaking up in flight as possibilities, but does not suggest any likely cause of the crash.

Sydney Seaplanes chief executive Aaron Shaw said in response to the report that its key question was why the plane was flying in a bay surrounded by steep terrain that had no exit.

"It is not a route we authorize in our Landing and Take Off Area Register and the plane simply should not have been where it was," Shaw said in a statement.

The plane crashed shortly after takeoff as it was climbing for a flight south to Sydney following a restaurant lunch.

The report cites eyewitnesses saying the plane suddenly entered a steep right turn before the nose dropped. The plane hit the water in a near-vertical dive, the report said.

Shaw questioned why a pilot with more than 10,000 hours of flying experience would enter an 80-to-90-degree bank angle turn, as witnesses described in the report.

"A turn of this nature at low altitude by a pilot with Gareth's skills, experience and intimate knowledge of the location is totally inexplicable," Shaw said.

The de Havilland Canada DHC-2 Beaver was built in 1963 and had an earlier fatal crash in 1996 while operating as a crop duster in rural Australia. That investigation found that the pilot likely stalled the plane, which was laden with a full tank of fuel and more than a ton of fertilizer in turbulent wind conditions.

The Transport Safety Board of Canada in September recommended that Canada make stall warning systems compulsory for Beaver planes after six people died during a sightseeing flight over Quebec in 2015.

The Australian report said the investigation will consider the issue of stall warning systems. The plane that crashed on Dec. 31 was not equipped with such a device, which are not compulsory in Australia. The plane was also not required to carry cockpit voice or flight data recorders, widely known as black boxes. 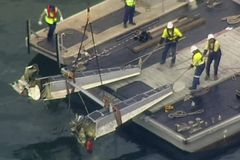