John Maguire still has the shirt.

Its blue fabric is laced with pale 10-year-old dust, and torn in the back where he was peppered with debris as he struggled to help carry the dead weight of a stranger he felt driven to assist.

"When the picture was out there, I figured maybe I'd hang on to this just as a memento. … It's hard to throw something away that has that much history attached to it.

"It probably isn't safe," to keep that dust around, he acknowledges. "But one day, I'll show my son."

The five men didn't know each other. And only one of them, Christian Waugh, really knew Rev. Mychal Judge, the people's priest and firefighters' chaplain who became the first official casualty of 9/11.

And all Mr. Waugh could think of, as he took the priest out of the shadow of the tower, was how badly he wanted to throttle the photographer taking their picture.

"I wanted to choke him. And he knew it."

Moments earlier, Mr. Waugh, a veteran firefighter, had been inside the North Tower, attempting to bring order to the morning's disarray.

He set up a makeshift control centre, but struggled to keep track of the crush of firefighters streaming into the building. As one company after another filtered up the maze of floors and blocked stairways, their whereabouts eluded him.

When NYPD officer Bill Cosgrove arrived from traffic duty in Manhattan, the scene he encountered in the lobby was one of almost slapstick chaos: Elevators blown out of their shafts like teeth punched loose of their sockets; stiletto-heeled businesswomen tumbling onto the sprinkler-slicked marble floor.

And there was Father Judge, standing in his helmet and coat, praying.

It wasn't unusual for the firefighters' chaplain to be in attendance. He made a habit of coming to every major incident, drawn by the number of beeps on his pager.

But this time was different.

"You could see it in his face," Mr. Waugh said. "He jokes around. Usually, he's always saying hello to somebody. And this time he was just stone-faced."

When the other tower fell, the force blew through the lobby, knocking everyone to the floor. As the dust cleared and they started to fumble in the darkness for an exit, Mr. Cosgrove nearly tripped over something motionless on the floor.

It was Father Judge.

At first it was four of them: Mr. Waugh, Mr. Cosgrove, rookie firefighter Zachary Vause and Kevin Allen from the city's office of emergency management. At first they got on each side and lifted; then they propped Father Judge's limp frame on a chair they found just outside the building. That's when Mr. Maguire found them.

"They just looked kind of smoked."

The West Point grad had come from his Goldman Sachs office, compelled to lend a hand, and together, the five carried the priest to an ambulance.

No men of the cloth were nearby, so Mr. Cosgrove improvised the last rites.

"I can't even remember the prayer I said. I think it was Our Father."

The photo was immediately everywhere: Mr. Cosgrove saw it returning to work at 3 a.m. the next morning; Mr. Maguire got a call from a hysterical sister; Mr. Waugh saw it at work in the middle of a 36-hour shift.

Father Judge's twin sister, Dympna Jessich, saw the photo staring up at her from the front-page of a newspaper on the bed at the friary, where she was staying for the funeral.

"You gasp," she recalls from her home in Maryland. "It was such a portrait of his life. He was so close to the people he worked with."

The photo stuck around and struck a chord – with people who knew Father Judge as well as those who'd never heard of him. A woman from Rhode Island painted the five men and their burden into a saintly tableau, and gave a copy to Mr. Waugh, among others.

He appreciates the gesture, but can't bear to see it daily.

"It's kind of a hard painting to hang," Mr. Waugh says. "It's not something you put in your living room."

So he knew what he was looking at when he saw Rev. Mychal Judge being cradled by five men trudging away from the North Tower.

"The expression 'dead weight' is very true. And these were five big dudes that were really struggling to carry him in a chair," he says. "It wasn't like they were trying to save this guy. There was a reason why they were doing this."

And he'll never forget the enraged firefighter, taking his focus off the burden at hand to give the photographer a piece of his mind.

"But he was yelling from a distance, so I just kept shooting. … You get to a point where you don't hear or see anything but what's in your frame."

Mr. Stapleton had been in Manhattan at a PR shoot that morning. When he first got the garbled assignment and instructions to head downtown, he was tempted to stick around Times Square and finish the gig. Then he saw the Jumbotron.

A stuttering subway ride brought him as far as Canal Street. As he emerged from the underground, one of the many people running in the opposite direction said, "We're under attack: The second tower's been hit."

"At that point, I knew I was about to cover one of the biggest events of my lifetime … in my backyard."

He approached the World Trade Center site amid the pop-pop-pop of floors collapsing upon themselves as the first tower fell, ducked into a vestibule and kept shooting.

He turned, saw the men and was struck by the scene: Men from three emergency-response branches and a civilian ex-soldier pulling together.

For Mr. Stapleton, who was a young photographer, that image changed everything.

"It kind of launched my career," he said. "It's been called the modern-day Pieta. … I didn't really know what it was. So I looked it up. And … I did see a resemblance."

NYPD officer recalls choking cloud of dust when twin towers fell
August 31, 2011
World Trade Center survivor emerged from wrecked tower, but never left it behind
August 30, 2011
The spontaneous 9/11 snapshot that has endured in a German woman's life
August 29, 2011
The 9/11 decade: A shared moment of crisis, and the anguish that remained
August 28, 2011 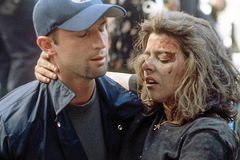 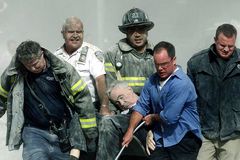