The day Donald Trump was elected, Simon Mendoza-Moreno was realizing a milestone in his own American dream.

Brought to the United States as an infant from Mexico, Mr. Mendoza-Moreno was raised by parents who never completed elementary school. When he was eight, his father, a migrant worker, lost part of his arm in a farm accident. Mr. Mendoza-Moreno went with him to all of his doctor's appointments and resolved to study medicine.

In high school, he became a certified nurse's assistant and went on to earn a degree in microbiology from the University of Washington. Earlier this year, he passed his qualifying exams to become a licensed physician's assistant and landed a position at a clinic in Wenatchee, Wash., a three-hour drive from Seattle.

His first day at his dream job was Nov. 8. When he returned home to his apartment after an 11-hour shift, the election results were beginning to filter in. He watched in shock and disbelief and called one of his former professors in tears. He knew what the results meant: Everything he had worked for could be taken away, including the only country he calls home.

Mr. Mendoza-Moreno, 25, is an undocumented immigrant. He is one of about 750,000 people who benefit from protections put in place by President Barack Obama to cover those brought to the United States illegally as children. Those measures include safeguards against deportation and the issuance of temporary work permits. Mr. Trump has said he would eliminate such programs, which were instituted by executive order.

Mr. Trump's election has sent a wave of fear coursing through communities of undocumented immigrants, whose presence in the country was a focal point of his campaign. He promised to build a wall along the Mexico-U.S. border, undo Mr. Obama's executive orders on immigration, immediately deport "criminal aliens" and take action to remove the 11 million undocumented immigrants living in the country.

Whether Mr. Trump plans to follow through on such promises is unclear. But activists and politicians in many parts of the country aren't waiting to find out. Major cities – including New York, Chicago, Seattle, Philadelphia and San Francisco – have vowed to maintain policies that hinder the federal government from deporting undocumented residents, setting up a possible clash with the new administration. Across the country, university students have called on their institutions to become "sanctuary campuses" by taking steps to shield students from possible deportation.

During the campaign, Mr. Trump endorsed the idea of a "deportation force" to remove both criminals who had entered the country illegally and those who have not committed crimes. In an interview with 60 Minutes after the election, he said he would immediately deport undocumented immigrants with criminal records, a number he put at two or three million (the correct figure is about 860,000, according to the Migration Policy Institute). Once the border is secured, Mr. Trump said, a "determination" would be made about other undocumented immigrants, whom he described as "terrific people."

For people in Mr. Mendoza-Moreno's situation, Mr. Trump's shifting positions generate a volatile mix of emotions. "Right now, honestly, it goes from fear to uncertainty to sadness," he said. He is less afraid of deportation after watching the 60 Minutes interview, but he expects to lose his work permit in May when it expires. "I'll go back to hiding in the shadows. I'll lose my job. I'll have all this debt."

The program that Mr. Mendoza-Moreno is part of is known as Deferred Action for Childhood Arrivals and was created in 2012 by Mr. Obama after attempts to forge a legislative solution failed. On Monday, the presidents of 180 colleges and universities called on Mr. Trump to preserve the program, calling it a "moral imperative and a national necessity." To apply for the program, undocumented immigrants provide all of their biographical and contact details, which are now stored by the government.

Immigration activists say they're working to prepare for the policies of the incoming administration. That includes informing undocumented immigrants of their constitutional rights and making sure they are ready for all eventualities, said Tania Unzueta, policy director of Mijente, a national hub for Latino organizing. For instance, she said, families should assemble a packet of relevant documents and a list of contacts to call in the event someone is detained by immigration agents.

"What we're doing right now is highlighting the stuff from people who have lived under tense conditions already, knowing it will be more widespread," she said.

Ms. Unzueta, 32, arrived in the United States at the age of 10 and benefits from the same program as Mr. Mendoza-Moreno. She said she is more afraid right now for her parents and other relatives than for herself.

She lives in Chicago, one of several hundred U.S. municipalities that limit co-operation with immigration authorities in various ways, earning them the moniker "sanctuary cities." In Chicago, authorities only turn over undocumented immigrants who are already convicted of a crime or who are the subject of an arrest warrant. That in turn eliminates the possibility that something such as a speeding ticket could lead to deportation. "To all those who are, after Tuesday's election, very nervous and filled with anxiety," Mayor Rahm Emanuel said last week, "you are safe in Chicago."

During the campaign, Mr. Trump threatened to cut taxpayer funding to such cities. Muzaffar Chishti, director of the Migration Policy Institute at New York University, said that penalizing cities could backfire on Mr. Trump's stated aims. Taking away funding would alienate cities further, Mr. Chishti said, rather than encouraging them to get local law enforcement authorities to increase their co-operation.

Mr. Trump's apparent focus on undocumented immigrants with criminal records is little solace to people such as Mr. Mendoza-Moreno. At the community health clinic where he works, many of the patients are migrant workers, some of them undocumented. During the week after the election, "the most heartbreaking part was seeing the fear in my patients, especially the children," he said. "It was palpable."

He sank into a depression in the days after the vote. Each day he would spend time sitting at the edge of the river that runs through town in the frigid fall weather, pondering his future. He loves his new job and says he can't imagine doing anything else.

He is the first member of the clinic's medical staff who is both bilingual and bicultural and patients are excited to see him. But his work permit expires early next year. "I almost feel like I'm misleading them," he said. "Who knows if I'm going to be gone in a couple of months?" 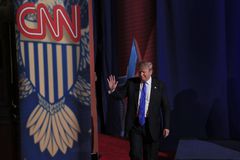 Is Donald Trump’s victory emboldening hate-mongers in Canada?
November 18, 2016
Follow Joanna Slater on Twitter @jslaternyc
Report an error Editorial code of conduct
Due to technical reasons, we have temporarily removed commenting from our articles. We hope to have this fixed soon. Thank you for your patience. If you are looking to give feedback on our new site, please send it along to feedback@globeandmail.com. If you want to write a letter to the editor, please forward to letters@globeandmail.com.
Comments