In the brief moments when their Boko Haram guards were gone, the abducted schoolgirls committed a small and hurried act of defiance: They recited Christian prayers.

The girls from Chibok were thin and haggard and clothed in the Islamic attire that their captors forced them to wear, according to a woman who was held captive with them. When their overseers were gone, the schoolgirls hugged, cried and prayed. They talked mostly about one subject: how to escape.

This is the harrowing account of a former Boko Haram captive who says she spent several weeks with the Chibok girls late last year in Gwoza, a Boko Haram stronghold in northeastern Nigeria. Her account is difficult to verify, but was detailed, credible and partially corroborated by reports from other former captives.

The abductions of more than 200 teenage schoolgirls from Chibok provoked a global wave of shock and outrage, sparking an international "Bring Back Our Girls" campaign and pledges of help from Western governments, including Canada.

But with the first anniversary of the abductions due to be marked on Tuesday by rallies and marches around the world, their fate is still unknown. Even after Nigeria announced the recapture of Gwoza on March 27, there was no sign of the abducted girls. People who have fled the region are convinced that Boko Haram took the girls into remote hideouts in the Mandara mountains, above Gwoza, near the border of Cameroon, after the military pushed the extremists out of the town.

The detailed account of the Chibok girls was given by Liatu Andrawus, a 23-year-old mother of two children, who spent six months in Boko Haram captivity before escaping in December.

She told The Globe and Mail that nearly all of the Chibok girls had been forcibly "married" – as Boko Haram called it – to members of the radical Islamist militia. She said the girls told her that 236 students from the Chibok school were in captivity, and only 13 had not been "married."

Ms. Andrawus, who now lives in an informal camp for displaced people on Abuja's outskirts, was herself forced into a "marriage" with a Boko Haram fighter last October, despite her protests. She repeatedly refused their demands to convert to Islam, even when threatened with death, but the militants still deemed her a Muslim and ordered her to attend Islamic studies and prayers at a school building in Gwoza, six times a week. That's where she says she met the abducted girls.

"They told me they were the Chibok girls," she said, recalling snatched conversations with the students when the male guards had sent them away to do their ablutions and Islamic prayers. "We always talked about how we could escape. Sometimes we sat down and prayed together and hugged and cried. They were remembering their good moments with their parents and loved ones."

Ms. Andrawus said she only saw the "married" schoolgirls. She never saw the 13 others, but was told that Boko Haram kept them locked in a large compound belonging to a Nigerian politician, who had abandoned it when the extremists captured the town.

Another former captive, 56-year-old Mbutu Papka, told Nigerian media last month that the Chibok girls were in Gwoza. She said she did not talk to the girls herself, but was told by people in Gwoza that some of the abducted girls were being held in a locked building adjacent to hers.

The story of Ms. Andrawus and her six-month captivity by Boko Haram could be similar to the ordeal of the Chibok girls after their abduction. Ms. Andrawus, from the village of Ngoshe in eastern Gwoza district, was travelling with her children and six men, including her brother, in a vehicle headed to Abuja last June when the car was ambushed by nine Boko Haram gunmen who shot at it until it stopped. The passengers tried to run up a hill, but were caught by the motorcycle-riding militants.

They were taken deep into the Sambisa forest, a notorious Boko Haram hideout, where the men were tied up and ordered to convert to Islam. When they refused, they were shot dead with machine guns.

Then the extremists told Ms. Andrawus to convert. They forced her to the ground and threatened her with a knife, but she refused. "I would not abandon my faith," she said.

At one point the men asked her whether she preferred to be killed with a gun or with a knife. She asked to be shot.

Boko Haram gave her an Islamic name, Aisha, and held her captive in the Sambisa forest with five other Christian women who had also refused to convert. The others were beaten with a rubber belt, but she was spared because of her children.

After Boko Haram captured Gwoza last August, she was taken there and forced to study the Koran with hundreds of other captives. In October, she was "married" to a Boko Haram fighter and forced to cook and clean for him. When she wasn't in Islamic classes, she was locked in his house.

At the Islamic classes, the captives were forced to watch videos of Boko Haram leader Abubakar Shekau. They were whipped with a rubber belt if they made errors in their Koranic studies, leaving Ms. Andrawus with bruises, bleeding and swelling.

She watched the Boko Haram fighters leave Gwoza almost daily to raid other villages, returning with stolen money and looted goods. When they stole jewellery, they gave it to a man who sent it to the northern city of Kano for sale. "We saw him weighing the jewellery," she said.

Among others there, she met a former Nigerian army officer who boasted that he had joined Boko Haram because it paid better than the army. She saw four Arabic-speaking foreigners who issued commands and seemed to hold senior positions in Boko Haram. And she talked to a female member of Boko Haram who planned to become a suicide bomber.

"She was very proud of it," Ms. Andrawus said. "She said it was the work of God."

In early December, she was allowed to visit her mother in a nearby town. One night she crept out of the house, with her mother and children, and walked 20 kilometres to Cameroon. After a week there, they made their way by foot and car to safety in Abuja. 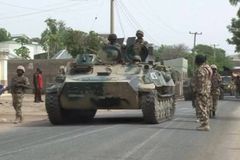 Nigeria’s war against Boko Haram takes to the airwaves
April 10, 2015 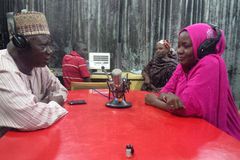 In Nigeria, beggar students vulnerable to exploitation and extremism
April 5, 2015