Tony Blair, former British prime minister, suggested Sunday that the U.S.-led invasion of Iraq in 2003, which removed Saddam Hussein from power, helped give rise to the Islamic State, even as he said it was "hard to apologize for removing Saddam."

Blair, whose decision to involve Britain in the military mission made him deeply unpopular at home, told CNN that "there are elements of truth" to the view that the war in Iraq helped pave the way for the Islamic State.

The militant group emerged as an offshoot of al-Qaida in Iraq, which fought the U.S. presence there, before separating from the organization. It now controls vast swathes of territory in Iraq and Syria, and is also known as ISIS or ISIL.

"Of course, you can't say those of us who removed Saddam in 2003 bear no responsibility for the situation in 2015," Blair said in an interview with Fareed Zakaria broadcast Sunday. "But it's important also to realize, one, that the Arab Spring which began in 2011 would also have had its impact on Iraq today, and two, ISIS actually came to prominence from a base in Syria and not in Iraq."

He said that it wasn't clear that, even if the policy in 2003 had failed, "subsequent policies have worked better."

Blair's comments came as Sir John Chilcot, who has led a six-year-long British public inquiry into the Iraq War, is set to announce a timeline for the release of the results of the investigation.

The inquiry was commissioned by former Prime Minister Gordon Brown in 2009.

Blair's comments immediately drew criticism at home. First Minister Nicola Sturgeon of Scotland posted on Twitter saying, "The Blair spin operation begins but the country still awaits the truth. The delay to Chilcot report is a scandal." Meanwhile, Sir Menzies Campbell, a former Liberal Democrat leader, said that Blair's comments would do "nothing to change public opinion that his was a major error of judgment," according to the BBC.

In the interview with CNN, Blair apologized, as he has done before, for what he called mistakes based on what turned out to be false information about the presence of weapons of mass destruction in Iraq.

"I apologize for the fact that the intelligence we received was wrong," he said, adding that he apologized for "some of the mistakes in planning and, certainly, our mistake in our understanding of what would happen once you removed the regime."

His office denied that the interview was intended to pre-empt criticism ahead of the Chilcot inquiry, which is expected to be critical of Blair.

"Tony Blair has always apologized for the intelligence being wrong and for mistakes in planning," a press officer told the BBC.

"He has always also said and says again here that he does not, however, think it was wrong to remove Saddam."

The press officer said that Blair was not suggesting that the removal of Saddam, a brutal dictator, had led directly to the emergence of the Islamic State. "He pointed out that ISIS was barely heard of at the end of 2008, when al-Qaida was basically beaten." 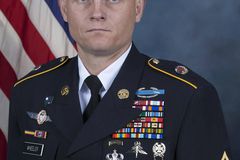 Oil sales net Islamic State up to $50-million a month, despite U.S. efforts to quell flow