Craig Mackinlay used to wear Nigel Farage's shoes. He was, briefly, the leader of the upstart UK Independence Party, pressing its radical demand to take Britain out of the European Union.

Now Mr. Mackinlay is hoping to be the one who brings an end to Mr. Farage's political career – and to deal a crushing blow to his former party in the process.

Mr. Mackinlay, a founding member of UKIP in 1993 who briefly led the party in 1997, is now the Conservative Party candidate in the constituency of South Thanet, a grouping of seaside towns in southeast England that have seen their tourism industry gradually disappear as low-cost airlines carried Britons to further, warmer climes. Polls show he is running neck-and-neck against Mr. Farage, the current leader of the UKIP insurgency, and the party's candidate in South Thanet, with three weeks to go before what is shaping up to be the most unpredictable of British elections.

Mr. Farage has vowed to leave politics if he doesn't win South Thanet in this, his seventh attempt to enter Parliament.

The stakes in this UKIP grudge match are high. If Mr. Farage finally wins a seat in Parliament, the reigning bad boy of British politics could wield substantial clout in the forming of the next government if – as is widely expected – neither the Conservatives nor the Labour Party emerge as a clear winner following the May 7 vote.

But a loss in South Thanet would call into question whether UKIP can continue its rise. Despite constant criticism that the party promotes racism and xenophobia with its anti-immigrant rhetoric, Mr. Farage has expanded its once-narrow base to include many disaffected Conservative and Labour supporters. The party won the largest share of the UK vote in European parliamentary elections last year, and also gained its first MPs when Mr. Farage lured two backbench Conservatives to join UKIP.

"It would be a great setback for him and for his party [if UKIP loses in South Thanet]. Farage is an extremely effective and articulate leader who understands his party needs to stay within the political mainstream," said Tony Travers, a professor of politics at the London School of Economics. "If he did go, I think UKIP would find it very hard to find a leader as good."

Nationwide opinion polls show UKIP set to win about 14 per cent of the vote, firmly establishing the long-time fringe movement as the third party in British politics (the Conservatives and Labour are each on track to win about a third of the vote). However, under Britain's first-past-the-post electoral system, it still might only translate into a handful of UKIP parliamentarians in the 650-seat House of Commons.

The close battle for South Thanet has hampered Mr. Farage's ability to campaign in other parts of the country. "Mr. Farage [is] so tied down against the Tories and Labour in Thanet that the national effort is having to be run from there. Resources are being poured into the seat," The Daily Telegraph reported last week.

The most recent poll revealed a three-way race in South Thanet, with Mr. Mackinlay holding a narrow lead with 30 per cent support to 29 per cent for Mr. Farage and 28 per cent for Labour candidate Will Scobie, a 25-year-old local councillor who made inroads by painting himself as the only alternative in a battle between UKIP and "UKIP lite." UKIP, however, rejects the poll as a statistical outlier after previous surveys gave Mr. Farage a comfortable lead.

Mr. Mackinlay says it wouldn't bother him at all to help bring an end to a party he played such a large role in getting started. UKIP, he says, has lost its way and now focuses too much on criticizing immigrants and immigration, rather than the argument it was founded to advance – and one he's still committed to – the need for Britain to leave the EU.

"I'm pretty disappointed with what the party's become. Some of their pamphlets make no mention of the EU at all – it's all about immigration. The baby I spent so much time putting together has become an ugly, unpleasant teenager," the 47-year-old accountant says as he goes door-to-door on a warm Wednesday evening, encountering voters who often challenge him about whether Conservative Leader David Cameron really will deliver on a promise to hold an in-or-out referendum on the EU by 2017.

Mr. Mackinlay entered politics as a protégé of UKIP founder Alan Sked, an academic who lost control of UKIP to Mr. Farage's more populist wing in the late 1990s. Mr. Mackinlay quit the party in 2005, believing that all UKIP was accomplishing was splitting the right-of-centre vote and making it easier for the left-wing Labour Party to win elections.

Drafting Mr. Mackinlay as the party's candidate for South Thanet was a symbolic win for Mr. Cameron, who – having dismissed UKIP in a 2006 radio interview as a party of "fruitcakes, loonies and closet racists" – is now appealing for UKIP supporters to "come home" to the Tories in order to prevent Labour Leader Ed Miliband from becoming Prime Minister.

Mr. Farage's camp has so far avoided getting into a war of words with Mr. Mackinlay. At a press conference to unveil his party's national manifesto on Wednesday, Mr. Farage said only that he "will not contemplate failure" in South Thanet. His local campaign office – wedged in between abandoned shopfronts in a hardscrabble neighbourhood of Ramsgate, the largest town in South Thanet – refuses all media requests, directing inquiries to UKIP's press office in London.

Despite a relatively homogenous population, the area has proved fertile ground for UKIP's narrative that uncontrolled immigration is making it harder for British-born residents to compete.

Though the Conservatives won South Thanet by a margin of 7,500 votes in the 2010 election (incumbent Laura Sandys decided not to seek re-election), a UKIP slate headed by Mr. Farage won the largest share of the vote in southeast England during last year's European elections.

The 51-year-old Mr. Farage told reporters last week that he didn't believe he was facing a last stand in South Thanet. "I've got a feeling I'm going to be around for a very long time." 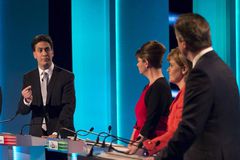