Failed Republican presidential candidate Scott Walker may feel some vindication in this number: 41 per cent of Americans say that if a wall is built along the Mexican border, one should also be erected on the Canadian one. And yes, the same percentage favours a wall erected along the nation's southern border.

The latest Bloomberg Politics poll that also shows that immigration, a flashpoint in the 2016 presidential campaign thanks in large point to the incendiary rhetoric of Republican front-runner Donald Trump, is an issue that stirs strong emotions among Americans, some of them contradictory. While four in ten Americans favour border walls, overwhelming majorities also express positive feelings about immigration: 80 per cent agree the U.S. economy has thrived historically because of new arrivals and 70 per cent expressed approval for the efforts of Pope Francis to encourage nations to be more welcoming of immigrants.

It was a point the pontiff made almost immediately upon arriving in the U.S., telling a crowd at the White House: "As a son of an immigrant family, I am happy to be a guest in this country, which was largely built by such families."

Trump has called for a physical wall to be completed along the border with Mexico, a concept that 41 per cent of Americans support and 55 per cent oppose; 56 per cent disagree with the idea of building a wall along the Canadian border, a notion that became one of the gaffes that hurt Walker's candidacy, which the Wisconsin governor ended earlier this week. After initially indicating that he thought the idea was worth additional study, Walker later clarified that he didn't actually want to build a physical wall along the more than 5,000-mile border.

Jake Crosan, 73, a retired truck driver from Pigeon Forge, Tennessee, is someone who does favour a wall along the Canadian border, if one is built along the southern border.

"If you cut off one, they're going to come in the other way," said Crosan, a Trump supporter. "It's desolate up there in some places on the Canadian border and they've gotta do something up there to stop them from coming in."

Asked if he worried of the cost of such a project, Crosan said it would be a good investment for the government and American people. "The money we would save by keeping the illegals out would pay for itself," he said. "They're taking our jobs, and the more people we get back to work, they pay taxes. It'll pay for itself."

Among other immigration proposals tested, the greatest support recorded was for requiring businesses to verify the immigration status of new hires, with 75 per cent backing this approach.

The next most popular proposal, winning the backing of 47 per cent of Americans: issuing visas granting permanent residency to foreign-born students educated in the U.S. so that they can stay and work after graduation. Closely following was the 44 per cent who favour streamlining the process for employers to hire the seasonal and permanent employees they need when Americans are not filling vacancies.

A slim majority of Americans – 54 per cent – agree with this statement: "Immigration is a national security concern, so legal and illegal immigration should be decreased."

The poll shows Americans are divided on the question of whether immigrants create jobs, with 48 per cent agreeing with the statement that the U.S. needs more jobs and should "selectively encourage more legal immigration," while 46 per cent disagree.

Paul Emel, 38, a shop foreman in a Kansas glass factory, supports Trump in part because of his views on immigration.

Among other issues polled, campaign finance reform garnered some of the strongest support among Democrats and Republicans. Nearly nine in 10 Americans want campaign finance rules changed so that the wealthy don't have more influence than those without money.

George Beaver, 63, a liberal retiree in Bradenton, Florida, said he thinks the rich should pay more in taxes and pointed to a time when the wealthy faced higher rates under a Republican.

On a foreign policy question, a narrow majority of Americans – 54 per cent – agree that since the Iranian nuclear deal is done it's "better to strongly enforce it to make it better than to rip it up." Americans are also narrowly divided, with 49 per cent saying the U.S. should take in Syrian refugees as a humanitarian act, while 46 per cent disagree.

On two questions dealing with abortion, 59 per cent of Americans oppose cutting federal funding to Planned Parenthood, something most of the Republican presidential candidates have advocated. Among registered Republicans and those who lean that way, 70 per cent think the funding should be cut.

Asked whether all abortion should be illegal, "even in the case of rape, incest, or to protect the life of the mother," 76 per cent of Americans disagree.

The poll of 1,001 U.S. adults was conducted from Sept. 18-21 by West Des Moines-based Selzer & Co. The margin of error on the full sample is plus or minus 3.1 percentage points.

Why is Donald Trump so popular? Look no further than Rob Ford
September 22, 2015 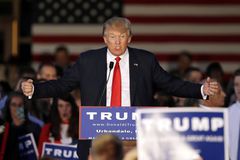 Build a wall with Canada? U.S. debate on Mexico touches the amigo to the north
August 30, 2015 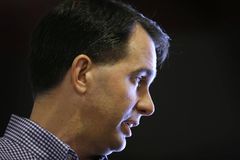