"It's hard to be a Jew." Michèle Teboul tells me this with a self-effacing smile, because she knows that hers is not the face of hardship: Her clothing business is doing well, her children have good lives and she's happy living in the dense cultural mosaic that is Marseilles.

But the truth of her words is beyond doubt this week. It's evident in the very necessary X-ray scan, the bag search and the ID check I had to endure to visit her at the Jewish community centre where she volunteers as the director.

The 60,000 Jews of Marseilles are finding themselves in a frightening position shared by many continental European Jews. They are trapped between two threats: The first, violent and criminal, comes from people around them, from the children of Arab friends and neighbours. The second, political, claims to be a solution to the first but offers nothing but conflict and menace.

The first threat reared its head, after decades of dormancy, on Monday morning in Toulouse. To history's long gallery of unspeakably horrific images, we can add a helmeted man chasing a terrified seven-year-old Jewish girl, grabbing her by the hair and shooting her in the head.

"We had not seen this since the Nazis did things like this," Ms. Teboul says. "We had imagined that, in 2012, this was over, this should not happen except in wars. But we are not at war in France."

But the conflict taking place on the other side the Mediterranean, in the Middle East, has become an obsession for some members of the continent's youth. At least one of them decided to make his Jewish neighbours into symbols of that conflict, by killing them.

For Jews of Ms. Teboul's generation, Arabs were neighbours and friends. Her parents, like those of most Marseilles Jews, immigrated from North Africa in the early 1960s, grew up listening to Arabic music and attending the weddings of Muslim friends. They were all proud to have become French, and they embraced French culture and identity with a passion, whatever their religion.

But Ms. Teboul has watched in alarm as the children of some of her Arab friends – as well as the children of some of her Jewish friends – have come to see themselves defined not by their French identity but by the images of the Middle East they receive on TV and the Internet. When they fall into hardship, this false identity becomes a dangerous obsession.

"This new generation, they don't know the history of Muslims and Jews in France," she says. "That's what's terrible, because they bring the problems of the Middle East here, and we don't want those problems. And even the young Jews – they do it, too. They say to me, 'How can you listen to Arabic music, it's not our culture.' And yes, it is our culture. We're not different."

It angered Ms. Teboul to hear Israeli officials declaring, at the funeral of the Jewish victims in Toulouse, that Israel is the real home of French Jews, that they should leave. This was yet another attempt, she felt, to define Europe's Jews not as established Europeans but as symbols of the Middle East.

"They say this in Israel all the time, but it is not true," she says. "France is not an anti-Semitic country. We cannot say things like this, it is not true. But now, after this, it is true that we do not feel secure."

Add to this the insecurity of Europe's new politics. It was hard enough a week ago, when the National Front – a political party with a history of Holocaust denial and inflammatory race-baiting – rose to third place in the polls, and President Nicolas Sarkozy's governing conservative party had begun to ape its lines about ethnic minorities and the supposed threat of kosher and halal meat.

Now, in the wake of the Toulouse killings, the rhetoric has heated up. Some of these new parties claim to be friends of the Jews: Their target, they say, is simply Islam. But by defining France's well-integrated community of Arabs as unwanted outsiders, rather than addressing their problems, they threaten to turn this crisis into a permanent problem and, by default, make Europe's Jews into perpetual pantomimes of a conflict on the other side of the sea.

"Do you know what we're scared of? We are scared that these politicians will change the landscape, and keep us on a razor's edge forever," Ms. Teboul says. "Jews do not need this. We do not need this at all." 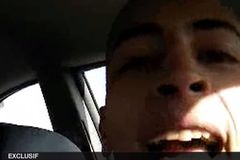 Opinion
Editorial cartoons from March, 2012
Gallery
February 29, 2012
Follow Doug Saunders on Twitter @dougsaunders
Report an error Editorial code of conduct
Due to technical reasons, we have temporarily removed commenting from our articles. We hope to have this fixed soon. Thank you for your patience. If you are looking to give feedback on our new site, please send it along to feedback@globeandmail.com. If you want to write a letter to the editor, please forward to letters@globeandmail.com.
Comments