French Socialist leaders produced a rare public display of unity on Tuesday as they struggled to respond to the sexual assault case against their favoured candidate for the 2012 election, Dominique Strauss-Kahn.

Party chief Martine Aubry acknowledged the left had been knocked sideways by Mr. Strauss-Kahn's arrest at the weekend on charges he tried to rape a maid at a luxury New York hotel, but promised the party would be ready for the presidential battle.

With a July deadline fast approaching to enter the Socialist selection contest, Ms. Aubry urged the party to pull together, look beyond the scandal and focus on the presidential race.

"Unity, responsibility, combativeness, these are the three words which came up the most this morning," Ms. Aubry told reporters after the meeting of the party leadership in Paris.

"There was emotion, of course, and the shock we all feel, but it is our responsibility to be up to the task," she said.

Until this weekend, Mr. Strauss-Kahn appeared to be the clear frontrunner to win the election and unseat conservative President Nicolas Sarkozy. Opinion polls have put Mr. Sarkozy in third place behind far-right leader Marine Le Pen.

The IMF chief spent a third night in a New York jail, after being denied bail and many Socialists voiced outrage at the fact he was paraded, handcuffed and unshaven, before cameras before having a chance to defend himself on charges of attempted rape.

Mr. Strauss-Kahn's sudden downfall has heaped pressure on Ms. Aubry to throw her hat into the ring and rescue the left's dream of a presidential victory for the first time in a quarter of a century. But her reluctance has led some to question her appetite for the battle.

"We have a timetable and today is not the moment" to declare a candidacy, she told France Info radio on Tuesday. "We are not changing anything in our timetable" for the primary.

Ms. Marine Le Pen -- who is gaining support as she plays on gloom over falling purchasing power and tension over immigrants -- stands to gain a point or two from the scandal. Mr. Sarkozy could see a similar lift, and his campaign will still focus on beating her in round one so he can face the left in a run-off.

With Mr. Strauss-Kahn out of the picture, the left's chances of re-election would rest on former party leader Francois Hollande and Ms. Aubry, both veteran left-wing figures with a strong support base, but who may lack the sparkle and sophistication to rally the vote they need.

Ms. Aubry, 60, was the architect of France's 35-hour work week in the late 1990s and has political clout as the daughter of former European Commission President Jacques Delors.

She has support from party militants but is an uncharismatic campaigner and may struggle to find ways to fire up left-wing voters. She has also struggled as party chief to unite a party riven by divisions since its 2007 election defeat by Mr. Sarkozy.

Mr. Hollande, 56, has a weak profile as he has never been a government minister and lacks international experience.

But in Mr. Strauss-Kahn's absence he would be the favourite to run, and is judged to have better campaigning skills than Ms. Aubry. He would also outshine his former partner Segolene Royal, who lost the 2007 presidency for the left but plans another try.

A small-sample Harris Interactive opinion poll for Le Parisien daily conducted on Sunday and Monday -- the first survey since Mr. Strauss-Kahn's arrest -- found Mr. Hollande could win 49 per cent backing in the Socialist primary and Ms. Aubry 23 per cent.

Analysts also expect more candidates to emerge, namely former prime minister Laurent Fabius, who would be by far the weightiest contender on the left, and Paris Mayor Bertrand Delanoe, who is popular for his imaginative city projects.

Mr. Fabius told reporters at the Socialist Party meeting he had urged the party to be dignified and stand together.

"It's a terrible situation in human terms and very difficult on the political front," he said. 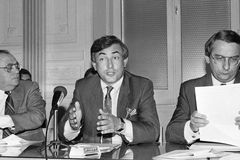 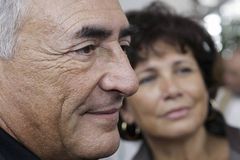 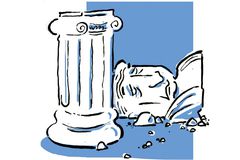