French cartoonists treasure their well-earned reputation as provocateurs without borders, especially in matters of religion. But the pre-dawn arson at a newspaper that caricatured the Prophet Mohammed may signal a new escalation in the country's culture wars between Muslims and non-Muslims.

The offices of Charlie Hebdo, one of the more insolent of France's satirical weeklies, were a charred mess early Wednesday, soon after copies of its latest edition mocking sharia, or Islamic law, hit the newsstands.

The front page of the broadsheet featured the Prophet as a bug-eyed, bearded man – named as its so-called guest editor-in-chief – saying, "100 lashes if you don't die of laughter."

Police were investigating reports that two men were seen throwing firebombs or Molotov cocktails at the building. The paper's website also was hacked, at one point showing only the picture of a mosque with the words "no god but Allah" before appearing only as a blank page.

The attack drew immediate condemnation from across the political spectrum in France as an affront to freedom of expression. Leaders of Muslim organizations also denounced it while appealing for sensitivity to Islam's prohibition against portraying the Prophet.

Dalil Boubakeur, the director of the Grand Mosque of Paris, said it was too early to say definitively that the fire was the work of angry Muslims. But he warned of a European "climate of Islamophobia" and stigmatization of Muslims fed by what he called distorted "caricatures" of their faith.

France has one of the largest Muslim populations in Europe, estimated at some five million, and has enacted a series of laws in recent years that many see as insulting and discriminatory.

In 2004, girls were forbidden to wear Islamic head scarves in public schools. The ban applies to all "conspicuous" religious symbols. It was framed as a means to uphold the French secular model that dates back to the anti-clerical movement that eliminated much of the political power of the Catholic Church in the early 20th century.

But since then, the niceties of that French ideal have faded with a rash of laws that overtly cater to fears that Muslims have not assimilated or become French enough.

Earlier this year, France became the first country in Europe to outlaw the face-covering veil, or niqab, in public even though those who wear it are thought to number only in the hundreds. It now has a new ban on praying in the street, again directed at Muslims who gather for Friday prayers.

Protests against those laws have been muted. But the attack on Charlie Hebdo could signal a new level of anger, at least on the part of some individuals.

It recalls the furor created in 2005 after a Danish newspaper published a series of caricatures of the Prophet Mohammed, including one with a bomb for a turban. Deadly riots broke out in many Muslim countries and the Danish paper was targeted by terrorists several times.

Charlie Hebdo, long known for its rabidly anti-clerical and anti-establishment bent, republished many of those cartoons in what it called solidarity in the face of threats to free expression. French Muslim groups later took the paper to court, accusing it of insulting their religion, but lost the case.

The paper, as usual, had advertised this week's edition in advance as "Sharia Hebdo," announcing it would take aim at the Islamist political party, Ennahda, which won the biggest bloc of votes in last week's elections in Tunisia.

According to Stéphane Charbonnier, its editor, threats against the paper started showing up on social media sites a few days ago and spread through mass cellphone messages.

But he said he did not interpret them as a serious risk of violence. "It's not the first time we've drawn Mohammed," he told the newspaper Le Monde. "We do it almost every week."

But this edition of Charlie Hebdo was filled with such caricatures.

The paper also had pages of often crude cartoons featuring Muslim men talking about stoning and beating women. A full page of cartoons was devoted to tips for Muslim women using the clichéd titles of fashion magazines. "How to make your forced marriage succeed," said one.

Islam, Islamists and Islamic law are part of the daily back-and-forth of public life, according to Luz, the cartoonist responsible for the front-page drawing of the Prophet.

"Mohammed spends his time inserting himself into the news," he told the magazine Nouvel Observateur. "We just did what we always do, follow the news."

Charlie Hebdo occupies the more extreme reaches of French satirical journalism, and its editors have long said they are against fundamentalists and "jerks" of all stripes. It is hardly alone in its equal-opportunity ridiculing of the Catholic Church, Islamists and puffed-up politicians of the left, right and centre.

Previous covers have featured a cartoon of a pedophile priest being advised by the Pope and another showing a venal-looking rabbi, priest and mullah saying, "We have to put a veil on Charlie Hebdo."

Le Canard Enchainé, another venerable and less vulgar weekly, often breaks news with handy leaks from disaffected civil servants. Since President Nicolas Sarkozy married Italian model and pop singer Carla Bruni in 2006, they are spoofed in a regular column called the Diary of Carla B. Its cartoonist, Plantu, whose work appears regularly in the mainstream newspaper Le Monde, said it is the job of political satirists such as him to skewer fundamentalists of all religions as well as the "jerks" of the world.

The attack on Charlie Hebdo was shocking for its violence, he added, but not a complete surprise for those who live by caricaturing the foibles of others. "We are at the vanguard of everything that happens in freedom of expression," he said. 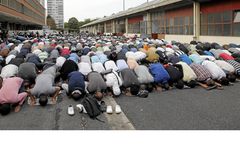