Tugging a red U.S. Open ball cap low on his forehead to fend off the blistering desert sun, the world's most famous political exile lofts a golf ball toward the mirage of the Dubai skyline, a drive that draws murmurs of approval from his fellow players at the $10,000-a-year club.

Thaksin Shinawatra smiles graciously at the applause and launches into tales of those he golfed with when he was prime minister of Thailand, before he was deposed in a 2006 military coup.

After a few dozen more swings, he invites his guests to what he calls "the best Thai restaurant in Dubai" - the multimillion-dollar home that has been his comfortable base for the past 2½ years while his homeland has been consumed with debate and deadly violence over the question of whether the country's most controversial son should be allowed to come back.

He is the hero of his country's poor and he believes the "Red Shirt" protests should be seen in the same light as the pro-democracy uprisings across the Middle East. The military-backed Thai government calls him a "terrorist" and a fugitive from justice. The mention of Mr. Thaksin's name can divide a dinner table in Bangkok into two angry camps.

But Mr. Thaksin hardly lives the life of a man on the run.

Instead, the 61-year-old splits his time between circling the globe on a private jet and his two-storey villa in the posh Emirates Hills development on the outskirts of Dubai. He runs his Red Shirt political organization - as well as a resurgent business empire - through six mobile phones that he keeps in a zipped leather handbag, each with a different ring tone that tells him the nature of the caller: business, politics, friends, family, others.

In an exclusive interview with The Globe and Mail and The Independent newspaper of Britain, during which he gave unprecedented access to his private life in exile, Mr. Thaksin said he is confident that his Pheu Thai party will win a July 3 general election, perhaps opening the door for an amnesty that would allow him to return to Thailand.

He says that the party - now headed by his younger sister, Yingluck Shinawatra - will prioritize national reconciliation, even as he strongly hints that his nemesis, Prime Minister Abhisit Vejjajiva, belongs in jail for ordering a bloody crackdown on Red Shirt protests in the centre of Bangkok last year that left 91 people dead.

The coming election offers yet another chance for Mr. Thaksin to prove wrong those who declared his political career dead in the wake of the 2006 coup, his 2008 conviction (in absentia) on corruption charges and again following the violence of last year.

The Pheu Thai party is just the latest incarnation of the political machine he built from scratch in 1998. An improbable alliance between some of Thailand's wealthiest businessmen and rural villagers angered by the country's widening wealth gap, it has under different names won the last three general elections, including unprecedented back-to-back landslides in 2001 and 2005 while Mr. Thaksin was top of the ticket.

Mr. Thaksin says he's heard "rumours" that his allies will again be kept from power if they win the July 3 vote. And he warned that while the military took power bloodlessly in 2006, another coup might be met with resistance.

"I don't think there will be another peaceful coup," he said. "The people are fed up."

For that reason, Mr. Thaksin believes it's unlikely there will again be tanks on the streets of Bangkok. More likely though, he said, is a "silent coup" whereby Pheu Thai might be kept from power through rulings of the Election Commission of Thailand or the courts, the latter of which forced a government headed by his brother-in-law from power after a pro-Thaksin party won the country's last election, in 2007.

Mr. Thaksin said that if Pheu Thai, which is running under the platform "Thaksin thinks, Pheu Thai does," wins the election, they will "offer reconciliation." He defended running his sister as a candidate for prime minister, saying it was the easiest way to communicate to his supporters that a vote for Pheu Thai is a vote for him. Early opinion polls show Ms. Yingluck holding a substantive lead over Mr. Abhisit and his Democrat party.

"Thaksin has decided that all he has going for him is himself and his name, so he's putting up his sister," said Chris Baker, a respected analyst of Thai politics and the author of a biography of Mr. Thaksin. Mr. Baker said he was worried that the highly charged election campaign - which is very much about Mr. Thaksin himself and whether he should be allowed to return to Thailand - would create further polarization and instability.

Mr. Thaksin acknowledged regrets from his tumultuous time in office, during which he was criticized for restricting media freedom and overseeing a controversial "war on drugs" in the south of Thailand that human rights groups say included extrajudicial killings. "I would say that I should have been more patient and tolerate[d]critics. Furthermore, I should have used more of velvet glove than iron fist in handl[ing]political and security issues," he said.

He says he was brought down and forced into exile by unnamed enemies that were jealous of his popularity. He claims his opponents concocted rumours that he planned to remove King Bhumibol Adulyadej as head of state, and transform Thailand into a republic with himself as president, something he insists isn't true.

While he waits and hopes for the chance to return triumphant to Thailand, Mr. Thaksin travels the world on his Bombardier Global Express XRS private jet that he says has flown 750 hours in the 10 months since he bought it. He has four cars in the driveway, including sleek black Jaguar and Lexus sedans.

Recently, the one-time telecommunications tycoon has spent much of his time in Africa, investing in gold mines in Uganda and Tanzania, coal in South Africa and a platinum mine in Zimbabwe. He said he has plans to eventually take his new mining company public, and was exploring the possibility of listing it on the Toronto Stock Exchange.

He says he has two passports, not six as has been reported in Thai and other media. He took Montenegrin citizenship last year after buying an island there, and has since 2009 been a special ambassador for Nicaragua. Thailand revoked his passport earlier that year.

Home for now is Dubai, where he said he has a residence visa. Despite repeated protests from the Thai government, which has urged the United Arab Emirates to arrest or expel him, Mr. Thaksin has been living in the villa (which real estate websites suggest is worth several million dollars) on Corniche Street in the gated Emirates Hills development.

It's a lifestyle very much removed from that of the poor in Thailand, who hold him up as their hero because of the rural development and cheap health care programs Mr. Thaksin introduced while in office. Mr. Thaksin says he has a personal staff of nine working for him in Dubai - four drivers, four domestic staff and one security guard - all of them Thais who followed him into exile. He says he remains a billionaire despite a move by the Thai courts to freeze $1.4-billion (U.S.) of his assets last year.

The divorced father of three lives alone in the villa, which has an elevator and a small pool in the back and says he asks his children not to visit all at once so that he doesn't get too depressed when they leave. During two lengthy interviews, he alternated between pining for a return to Thailand and claiming that he is happy with the nomadic life he has now.

"I will go home [to Thailand]only in the case that things are settled down. I will not add any more problems to the country … In the beginning, I was upset. Now I'm quite settled abroad," he said, leaning forward a sofa in his living room in front of a carefully arranged display of photographs of himself meeting with world leaders who have received him during his exile. It's an eclectic gallery: Mr. Thaksin smiling alongside the likes of Cambodian Prime Minister Hun Sen (who briefly employed him as an economic adviser), Nicaraguan President Daniel Ortega, Congolese President Laurent Kabila and others.

In person, Mr. Thaksin comes across as genial and anxious to please. The charisma of a natural politician is watered down slightly by a sense of desperation, even loneliness., that likely comes from his long battle with the Thai establishment, and perhaps a sense that much of the international community doesn't view him as the champion of democracy that he tries to portray himself as being.

He believes last year's crackdown by the Thai military on the Red Shirt protests should be considered on par with those that spurred international action against Libya and Syria. His lawyer, Canadian Robert Amsterdam, recently filed a petition at the International Criminal Court in The Hague, charging that the Thai government - and Mr. Abhisit in particular - were criminally liable in last year's violence.

In the end, Mr. Thaksin knows that even another electoral triumph won't mean his fight is over. Mr. Thaksin's popularity, and his policies have put him at odds with the real powers-that-be in Thailand - the military and the monarchy. No matter what the ballot box results are, no one can rule Thailand without the consent of those two institutions, and Mr. Thaksin seemingly has few friends in either.

But he doesn't sound like a man about to give up a fight that at times has threatened to split Thailand in two. "The more bullying they do, the more they press me, I say 'thanks'," he says. "The more bad things they do, it helps my campaign."

Known countries he's visited since he was deposed in 2006 coup:

Countries where he is now persona non grata:

Thailand's high-stakes gamble after crackdown
May 13, 2011 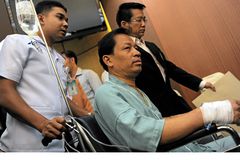