"It's a funny old world," said Margaret Thatcher to her cabinet on the day she realized she was to be flung out of office after 11 1/2 half years as prime minister.

No one can really know what feelings lurked behind that quintessentially English remark.

But thanks to Lady Thatcher's newly published memoirs, it's reasonable to surmise they were something like this: How could I, Margaret Thatcher, terror of the Commonwealth, scourge of Tory "wets" and squishy liberals everywhere, vanquisher in the Falklands war, tamer of upstart British unions, been overthrown by this sorry lot?

Three years later, she still seems slightly amazed at the fact. "It was quite extraordinary," she said in an interview in her Toronto hotel room yesterday.

She was at a meeting in Paris on European disarmament when she learned that she had fallen just short of a majority in the first ballot of a Conservative party leadership contest. "It was only a question of getting a couple more votes - perfectly simple. But I was away and they just lost their nerve. That was it." The Thatcher era was over.

Never mind. She's getting her own back now.

Since the British publication of The Downing Street Years, an unapologetic defence of her prime ministership, Lady Thatcher has been swinging her rhetorical handbag freely at critics, enemies and, particularly, the Conservative friends and allies whose "weasel words" brought her down.

In three weeks she has given nearly 100 media interviews, made two dozen or more speeches and appeared at countless bookshops and department stores to sign copies of the 914-page tome. She was mobbed in Manhattan and sharp as a needle on Larry King Live.

Throughout, she has shown the same finger-wagging righteousness on display in her slap-and-tell memoirs – and, indeed, during her tumultuous years as prime minister.

Despite a "stinking cold" contracted on her hectic book-flogging mission, she is precise and intense in person. She speaks, as ever, in italics. And the handbag never stops swinging.

The New World Order? Whump. "There isn't, and there never will be. There may be world organizations, but not a new world order. It wasn't the United Nations that did the fighting in the (Persian) Gulf."

The Commonwealth's attempts to put economic sanctions on South Africa? Whap. "I found it utterly repugnant that you could have 50 or 60 heads of government sitting in a five-star hotel, saying they're going to put sanctions on others and make them starve. So I didn't allow it. Thank goodness."

Edward Heath, her predecessor as Tory leader? Wham. "Ted had a pretty good Conservative manifesto. Then the going got rough and he did a U-turn. I came in and the going got very rough – and we drove the policies through."

The Independent, the London newspaper whose reviewer compared her book to Hitler's Mein Kampf? Whop. "I wouldn't expect The Independent to do anything else. The Independent wouldn't exist without me." (She said her government helped do away with restrictive printing trade practices that prevented new papers from being established.)

The other reviewers who have called the book self-serving? Slam. "I think you will find that some reviews are very characteristic of the reviewer."

The same, of course, has been said of The Downing Street Years. Many reviewers have given it high marks for readability, and publisher HarperCollins, expecting high sales, has shipped almost half a million books around the world.

But critics have accused the author of writing it in the same tone of invincible certainty that marked her prime ministership.

Sir Geoffrey Howe, whose resignation from the cabinet helped bring about her fall, wrote that the "memoirs are scarred by an almost obsessive desire to justify her last three years in power." Hugo Young, political writer for The Guardian, said the memoirs were "the story of a political leader with the conviction, unique in modern times, that she was, without any doubt and on all important occasions, right."

But Lady Thatcher – or Baroness Thatcher of Kesteven since her elevation to the House of Lords in 1992 – has no regrets about her lack of regrets.

"If I'd said in 1979 – if I'd made out a list of the things that actually happened and said this will happen - people would have just thought that I was mad. But it happened. We did the impossible.

"We brought our taxation down, we brought regulation down, we got the formation of jobs right up, and, in addition to that, we made it quite clear that we were simply not going to appease an aggressor. So anybody who wanted to take British land, or take British people captive, we went and got it back."

In the book, Lady Thatcher says that she had the same inner conviction as her 18th-century predecessor William Pitt, the Earl of Chatham, whom she quoted as remarking that "I know that I can save this country and that no on else can."

She sums up with a bit of verse: "It's easy to be a starter, but are you a sticker too? It's easy to begin a job, it's harder to see it through."

Lady Thatcher leaves no doubt into which category she believes she falls. 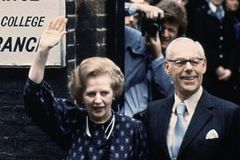 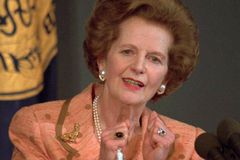