This article originally ran in the Globe and Mail on Feb. 18, 1959 with the headline "Color, Drama: In Havana, Revolution Looks Big" two days after Fidel Castro was sworn in as Prime Minister of Cuba.

The question of whether a revolution is large, medium or small depends to a great extent, I suppose, on where you happen to be at the time.

In Toronto, for instance, if you ran your finger down the map until it reached Cuba, the country and its troubles and hopes might appear to be fairly small when compared with the general world picture. (Although it might surprise a few people to learn that this island is some 800 miles long and 200 miles across at its widest point.)

But when you get down here and become absorbed in the atmosphere that prevails, Cuba's revolution looks much larger from a close-up view.

Certainly few revolutions have ever had more dramatic and colorful aspects.

A few weeks ago Fidel Castro, the bearded revolutionary leader, sat in his rough and hidden camp in the Sierra Maestro in Oriente Province, confident of eventual victory but perhaps never dreaming that his hour of triumph was so near.

Today he sits in a luxurious suite on the 23rd floor of the Habana Hilton, puffing on his constantly burning cigar, listening to visitor after visitor and delegation after delegation and, no doubt, pausing, during the few brief moments of privacy afforded him to consider the responsibilities which go with the business of playing god.

And there's no question about this colorful rebel leader being regarded as a kind of god by many of the people who have been liberated from the heavy-handed dictatorship of former president Fulgencio Batista. And because he seems to be a sincere and thoroughly conscientious leader, Castro appears to have a hard time saying no to the people who supported him and now wish to see him.

At the same time, he appears anxious to dissociate himself from the "strong man" image which has naturally been created in the minds of so many. It seems likely, however, that the people of Cuba are going to continue to dump their problems into Fidel Castro's lap for some time to come, and whether this adventurer and man of physical action will be able to bear up with wisdom and good judgment under this new kind of load forms what is probably one of the largest question marks now facing this republic.

Meanwhile, far below the eagle of the Sierra Maestro's eyrie of streamlined glass and stainless steel on the Habana Hilton's 23rd floor, life goes an in the streets of Havana. His troops, an almost incredibly orderly group of soldiers, stroll along the sidewalks toting their machine guns and rifles. Most of them are farm lads from the hills of Oriente and it is likely that few of them had ever seen such a large and glittering metropolis as Havana in their lives until they marched in behind their victorious leader, who had been able to offer them little other than an opportunity to serve their country under extremely grave risk.

Although he has absolutely forbidden them to drink, Fidel Castro evidently doesn't see any harm in allowing his men to enjoy a little amour in the big town and the lads are naturally receiving from Havana's senoritas the attentions a liberating warrior deserves.

But even in the courting department, Castro's soldiers seem to be conducting themselves with great dignity, in the manner of modest heroes.

They shift their machine guns delicately before tipping their hats to their ladies.

An important chapter in the legend now being created here took place in 1956 when Fidel Castro led a disastrous and almost quixotic invasion of Cuba from the sea, and it was a moving experience to stand on the Prado before the Capitol Building the other day to witness the finish of it.

In 1958 in a yacht named the Gramma, Castro set sail from Mexico with 82 followers, landing on the southern coast near the town of Noquero in Oriente Province. Within two days at least half of this pitiful little army had been killed in the mangrove swamps near the town.

The rest of the force fled to the mountains called Sierra Maestra. By the time they had reached the safety of 7,000-foot high Pico Turquino, only Castro and 11 of his men were left alive.

From this 11 grew the force that finally toppled Dictator Batista.

A few days ago, the remains of 19 of those who sailed to their deaths aboard the Gramma were discovered near the Oriente city of Manzinillo. They were flown to Havana where for two days they lay in state in the Hall of Lost Steps in the Capitol.

As I stood watching on the Prado, the 19 who never lived to see the glory of this day were borne to a place of honor in Colon cemetery, with Fidel Castro and President Urrutia walking in the lead. The remains were in little boxes, four or five to a hearse, and behind them walked their sorrowing relatives and friends.

And, marching in slow step, passed the shaggy men of Fidel Castro's rebel army, some youngsters in their early teens and some grizzled veterans.

It had been a long, hard journey from Oriente to this sunny avenue before Cuba's Capitol, both for the living and the dead, and from that spot at that moment Cuba's revolution looked pretty big. 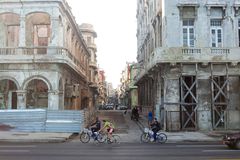