One of Africa's most brutal and bizarre dictators has suffered a shocking electoral defeat at the hands of a former security guard with little political experience.

Gambian President Yahya Jammeh, an army lieutenant who seized power in a 1994 coup and dominated his tiny country for 22 years, had vowed to rule for "a billion years." Instead, the country's electoral commission has announced the victory of real estate developer Adama Barrow, leader of a coalition of opposition parties.

Cheering crowds quickly thronged Gambia's streets on Friday, singing, dancing and blowing whistles. The dictator's defeat was a remarkable victory for African democracy, which has been under siege in many other African countries this year as authoritarian regimes crush protests and extend their rule.

Mr. Jammeh was an eccentric ruler who claimed to be able to cure AIDS and infertility with his homemade herbal potions. While his secret police jailed and tortured his opponents, he threatened to decapitate gays and ordered the arrest of suspected "witches and wizards." His police have arrested people for failing to show enough enthusiasm for the President when his motorcade drove past. He even banned soccer in the countryside, ordering villagers to focus on farming.

The election result is good news for the Canadian government's campaign to save the International Criminal Court, which prosecutes war crimes and crimes against humanity. Under the Jammeh regime, Gambia was one of three African countries that had announced plans to quit the international court, leading to speculation of a wider African withdrawal. But Mr. Barrow has promised to lead Gambia back into the court.

With its sandy beaches and luxury resorts, Gambia was a paradise for Western tourists, attracting tens of thousands of sun-worshipping Europeans every year. But the vast majority of its citizens lived in desperate poverty, and a growing number have risked their lives to escape. More than 10,000 have fled the country this year alone, braving the dangerous journey through the Sahara and across the Mediterranean to Italy, a route on which many die.

Mr. Jammeh had tried to control Thursday's election by banning foreign observers, shutting down the Internet, sealing borders, halting all international phone calls and arresting journalists and opposition activists. But those tactics failed to prevent his loss. He won only 36.7 per cent of the vote, while Mr. Barrow won 45.5 per cent, according to the election commission.

Opposition parties had formed a coalition with Mr. Barrow as its candidate, and he was greeted by large crowds throughout the campaign. Earlier this year, a growing number of Gambians had joined street protests against the regime.

Human-rights activists welcomed the election result on Friday. "The last two weeks have shown how much Gambians of all parties value free speech," said Sabrina Mahtani, a researcher for Amnesty International.

"There is a huge obligation now for the future administration to transform the human-rights situation in Gambia, freeing political prisoners, removing oppressive laws and entrenching newly found freedoms."

Many Gambians who had fled their homeland said they were now ready to return. Mbye Njie, a Gambian in exile in the United States, tweeted: "Can't believe I get to go home finally. I get to see my family. Can't stop crying."

Gambia is one of the few African countries where democracy has taken a substantial step forward in recent years. Nigeria last year experienced its first peaceful transition of power in a democratic election, when former president Goodluck Jonathan accepted the victory of his challenger, Muhammadu Buhari.

In another West African country, Burkina Faso, an authoritarian ruler was pushed out of power by protests in 2014.

But in many other African countries – including Burundi, Rwanda, Ethiopia, Uganda, South Sudan, Gabon and Zimbabwe – authoritarian rulers have recently extended their power by revising their constitutions, rigging elections or violently crushing peaceful protests. 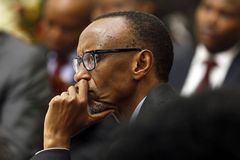 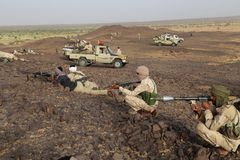