The environmentalists protesting daily outside the White House over a proposed pipeline to carry "dirty" Alberta oil south – and landing in the slammer for it – cast doubt on Canada's image as a pristine purveyor of nice.

Luckily, Gary Doer has been several steps ahead of them.

Since becoming Canada's ambassador to the United States in late 2009, the former Manitoba premier has travelled from the Carolinas to California, and to most points in between, to make the case for the oil sands.

He is just back from last weekend's annual meeting of southern U.S. governors in Asheville, N.C. On Saturday, as protesters began a two-week-long blitz of daily rallies in Washington, Mr. Doer was talking up Canadian crude – and the proposed Keystone XL pipeline – to the governors and hundreds of state legislators and business people gathered in Asheville.

Guess who had more impact?

The environmentalists hope their arrests – 275 had been cuffed and briefly jailed so far – provides them with the media spotlight. Mr. Doer has stayed out of prison – thus far – opting for the more "grinding" work of winning over federal, state and local politicians.

It is not hard persuading Americans they are better off getting more of their oil from friendly and democratic Canada than from unstable or undemocratic regimes in Venezuela, Africa or the Middle East. American politicians generally need no lessons in geopolitics.

"What we think we've had to get out there are, beyond the energy security [argument] are the numbers on the economic security side," Mr. Doer said, pointing to the more than 900 U.S. companies who supply the oil sands with everything from heavy equipment to customized software.

"We meet with congressional representatives and point out what [companies]in their district are supplying the oil sands," he explained Wednesday in an interview in his suite overlooking the U.S. Capitol. "When you meet with President Obama, you point out the 68 companies in Illinois."

Among the best-known is Caterpillar, whose massive 470-ton dump trucks are assembled in Decatur, Ill. The engines are built in Indiana. Those Alice-in-Wonderland-scale tires are made by Michelin in South Carolina.

Calgary-based TransCanada's $7-billion Keystone XL pipeline fits into Mr. Doer's economic pitch as a major infrastructure project that would create 20,000 unionized construction jobs and hundreds of millions of dollars in tax and other revenues in the six states through which it would pass.

The pipeline would almost double the capacity of Alberta crude that TransCanada can ship south, to 1.1 million barrels a day, and provide a direct line to Gulf of Mexico refineries on the Texas coast.

The U.S. State Department must approve the project since the pipeline crosses an international boundary and Secretary of State Hillary Clinton has promised a decision by year-end.

But even environmental lobbyists concede the odds of stopping the pipeline, and hence undermining the economic case for oil sands, are slim.

Bipartisan support for the project is overwhelming on Capitol Hill, where the House of Representatives last month voted 279-to-147 in favour of a resolution calling on the administration to make a decision by Nov. 1.

Five of the six affected governors support the project. The sixth, Nebraska Republican Dave Heineman, opposes only the pipeline route through the Ogallala aquifer.

Mr. Doer, who was a highly-popular New Democratic premier and whose name has been raised as a future federal party leader, is hardly taking the pipeline's approval for granted.

To everyone he meets these days, he insists the 2,700-kilometre Keystone XL would adhere to far tougher safety standards than any of the 235,000 kilometres of oil pipelines already built in the United States.

And he counters the reputation of oil sands crude as "dirty" owing to the greater amounts of freshwater depletion, greenhouse gas emissions and deforestation it causes compared with conventional oil production.

"We believe that when somebody claims something that's 10 years old about water utilization or [carbon]emissions, we have to put the facts on the table," he said, noting that it now takes far less water to produce a barrel of oil sands oil than it does to produce the same amount of ethanol.

"There have been major improvements made. We're not saying to anyone that they're complete. We've got to keep using innovations to improve water utilization and emissions per barrel."

The environmentalists picked an odd moment to launch their anti-Keystone blitz. Mr. Obama is on vacation and most of the White House press corps is either with him or taking the week off. Those left behind have all but ignored the protests, stretched as they are between covering a regime change in Libya and Washington's once-in-a-century earthquake.

When the President returns next week, the media focus will be on the jobs plan he intends to outline in a major speech he is expected to deliver around Labour Day. Killing the shovel-ready Keystone project would not get him off to a very good start.

But thanks to Mr. Doer's hard work, he probably already knows that. 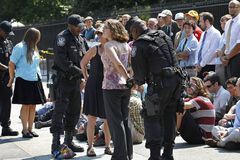