Charles Huber has spent a lifetime breaking colour barriers in Germany. Now he is breaking another by becoming one of the first black Germans elected to the country's parliament.

Mr. Huber, whose mother was German and father a diplomat from Senegal, won a seat for the ruling Christian Democrats in parliamentary elections last month. He joined Karamba Diaby, an immigrant from Senegal who was elected for the Social Democrats, as the first two Germans of African ancestry elected to the Bundestag. It's a remarkable result considering there are only about 500,000 African-Germans in the country.

"It was a historic victory," Mr. Huber, 56, said while driving to Berlin from his home in Bavaria. "If [my election] is a role model, I appreciate that I will discuss that with young migrants or with others, no problem."

The election was something of a breakthrough for ethnic minorities in Germany, which make up about 20 per cent of the population. In addition to Mr. Huber and Mr. Diaby, 11 candidates with Turkish roots also won seats, giving the 630-seat parliament its broadest representation ever.

People like Mr. Huber and others hope the larger ethnic mix in parliament will help ease ethnic tensions particularly when it comes to the country's three million Turks. Like many European countries, Germany has struggled with immigration policies and right-wing extremists.

Mr. Huber believes Germany has come farther in terms of relations among cultural groups than many people from outside the country realize. His skin colour "never came up" during the campaign he said. "What I am representing is not black Germans, I'm representing Germany as a whole. We are not that numerous to say we need a black man in parliament."

That wasn't always the case. Born in Munich, Mr. Huber spent much of his childhood living with his grandmother in the country after his parents split up. He studied to become a dental technician but found his way into acting instead and, by the 1980s, he had made a breakthrough on German television in a popular crime show called Der Alte, or The Old Man, in which he played a detective. The series ran from 1986 to 1997, making Mr. Huber a household name.

His early brush with fame was controversial. His skin colour "was an issue when I became a star in the TV series," Mr. Huber said. "I was the first man of African descent in a TV series outside the U.S. … At this time some people wanted to kill the producer for hiring a black guy as a policeman in Germany."

As the series gained popularity, people forgot about his skin colour, he added. He later became a consultant to various German government ministries and international agencies on culture and trade issues, particularly involving Africa. When the Christian Democrats approached him earlier this year about running for office, Mr. Huber jumped at the chance. "I think if you really want to improve something, and we talk about improving relationships between Germany and other countries, you have to do that with a mandate not as an adviser," he said.

Because of his TV fame and work as a consultant, he said, he is accepted as a native-born German. "I speak with a Bavarian dialect. Huber is as Bavarian a name as can be. Maybe if I had an African name it would change something, or if I spoke with an accent," he said. "I grew up among white people. I'm used to white people."

There are still occasions when Mr. Huber is pigeon-holed and people presume he is an immigrant. He said he doesn't mind and speaks openly about the challenges facing immigrants, not just in Germany. "It starts with concrete programs, language skills and all that. If you don't know the language in the country you are living in, you are a potential victim," he said. "If I come to Canada and I don't speak English or I don't speak French, how will I talk to the people? If my vocabulary is about five or 10 words, they will look at me and say 'Thank you, nice meeting you.'"

And he has a simple message for immigrants who come to Germany: "Don't look back. A lot of things happened. Look forward and leave it all behind," he said. "Maybe I can help to reset this discussion in another direction, a more positive direction. If I succeed in that I will be happy." Merkel’s next crisis: Keeping the lights on
Subscriber content
September 23, 2013 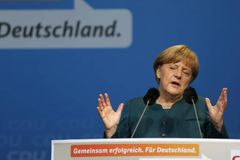 Merkel’s final term an opportunity to create a legacy
September 23, 2013