Helmut Kohl, Germany's former chancellor, had a favourite maxim about his vision for the future, inspired by the words of the famous writer Thomas Mann. The ultimate goal, Mr. Kohl said, was "a European Germany, not a German Europe."

Now, as Greece implements the bitterly fought agreement reached Monday with its creditors, the deal underlines the new reality of the euro zone: Germany is remaking the currency bloc in its own image.

It's a place where the focus is on spending cuts, implementing structural reforms and abiding by the rules. It's also backed by an implicit warning – if a country veers off track as Greece has, it will pay dearly or face a calamitous ejection from the currency union.

Germany was joined by other countries in the 19-member euro zone in pushing for the terms of the latest Greek bailout, which includes an unprecedented plan to sequester and sell off state assets. Indeed, there was little real opposition – apart from brief interventions by France and Italy – to the German-led approach.

The new bailout, ratified by the Greek parliament early Thursday morning and awaiting ratification elsewhere, holds risks for Germany. In some quarters, the reaction to the deal has cast Germany as the villain, a ruthless disciplinarian intent on punishing Greece. And as the principal architect of the plan, it will bear responsibility if the deal collapses or if the current crisis repeats itself.

The German government believes "that it's in Europe's interest to basically become more like Germany," said Hans Kundnani, an expert at the German Marshall Fund of the United States who recently authored a book called The Paradox of German Power.

German policy-makers genuinely believe the harsh medicine for Greece and others is the right thing to do, he added. In some ways, Germany is "trying to universalize its own history," Mr. Kundnani noted. That history includes an extreme leeriness of inflation and debt, plus more recent experience about a decade ago with a series of successful economic reforms, including an overhaul of its labour market.

In some cases, however, the reforms demanded of Greece go beyond what Germany has implemented. For instance, Greece must now lift restrictions on Sunday commerce and liberalize ownership rules for pharmacies, measures that would provoke strong opposition if attempted in Germany.

What's more, the current focus on technocratic solutions and strong-arm tactics is far removed from the grand visions that once animated the creation of a common currency. "It's becoming a much more coercive European Union," Mr. Kundnani said. "This is an extraordinary distortion of the European project."

The lesson of the latest negotiations is not lost on other countries, a recent front-page editorial in the French newspaper Le Figaro noted. "There is a subliminal message that France and all the 'lax' euro zone economies should grasp. When the EU has to pick up the prices, it exacts a heavy price … for us, too, the strengthened supervision and austerity that Athens will undergo warrants caution: this Europe is ruthless."

Yet, Germany's approach found broad approval from other members of the euro zone. Indeed, some countries – Finland, Slovenia, the Netherlands for instance – were pushing for an even harsher tack with Greece.

"I don't see Germany as being an outlier," said Ulrich Speck, a visiting scholar at Carnegie Europe in Brussels. "I see it rather as someone who is in the middle ground and seeking a balance" between hard-liners and those who advocated a less austere path. Germany "is taking a lead by managing the debate."

In Germany, a poll conducted for a broadcaster earlier this week showed that a majority of citizens supported the new bailout plan, Greece's third. But there was also deep skepticism about Greece's willingness to follow through with the reforms: Nearly 80 per cent of those surveyed said they didn't trust Greece would implement the changes.

That distrust is echoed in Germany's parliament, where some predict that Chancellor Angela Merkel will see large numbers of defections from her own party when the Bundestag is scheduled to vote on the deal on Friday. Some members of Ms. Merkel's Christian Democratic Union "are really pissed off," said Olaf Boehnke, who heads the Berlin office of the European Council on Foreign Relations.

They feel betrayed by the actions of the Greek government, he said, which could jeopardize the entire European economy. The feeling among such lawmakers is "the Greeks crossed the red line and they have to suffer in a way, for that behaviour," Mr. Boehnke said. Their conclusion for the euro zone's future: "The only way we can survive is we all follow the rules."

Some observers despaired of the way Greece's predicament has been presented in Germany. "If you are breastfeeding Germans newspaper headlines about lazy Greeks," that has an impact on public opinion, noted Ulrike Guérot of the European School of Governance in Berlin. "We need to deconstruct these arguments," she said. "We are the biggest benefiter of the whole European project."

By losing sight of that fact, she said, Germany risks its historical role as the country that was willing to do and pay a bit more to move the project forward – a kind of benign hegemon. These days, "we are doing hegemony without the benign-ness." 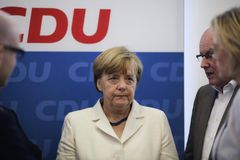