Mohammed Tariq left his home in Pakistan two years ago and ended up scraping together an existence in Athens as an electrician. The 23-year-old didn't have permission to work and earned very little money.

Then, late this summer, he and his cousin decided to try something new: Germany. "People say the work is good, the money is good, the future is good there," said Mr. Tariq in September, just after crossing the border into Austria from Hungary.

He may be in for a rude surprise. Even as Germany opens its doors to refugees, it is swinging them shut for those seeking a better life.

In the past month, Germany has received tens of thousands of people fleeing persecution and violence in countries such as Syria, Iraq and Afghanistan. Amid the stream of irregular arrivals, there are also some who are simply trying to escape poverty or improve the lives of their families.

Germany is moving to differentiate between such migrants, whose motivations are primarily economic, and refugees with a right to protection enshrined in international law. On Thursday, the German parliament took up new rules that will make it easier to eject such arrivals and reduce perceived incentives for making the journey.

The steps debated on Thursday are part of a delicate dance by Chancellor Angela Merkel's government. Ms. Merkel has sought to reassure citizens that Germany is capable of handling the challenge posed by the largest wave of refugees to enter the country since the Second World War. But even as she urges generosity, her government is keen to prove such impulses are not being abused.

"We are clearly committed to integrating those who are worthy of protection," Thomas de Maizière, Germany's interior minister, said on Thursday. Those who are not, he added, will have to leave.

The legislative changes would add three new countries – Kosovo, Albania and Montenegro – to a list of mostly Balkan nations deemed "safe" by the German government. Local authorities have started to shunt asylum-seekers from such countries into special centres where the goal is to process their claims and return them to where they came from as quickly as possible.

The latest measures also mandate a shift from providing pocket money to refugees when they first arrive – €143 ($211 Canadian) a month – to an equivalent amount in the form of goods such as food and clothing.

The arrivals from the Balkans do not form part of the thousands of people crossing the Mediterranean, the large majority of whom have credible claims for asylum. More than 520,000 people have made the journey across the sea this year, according to the latest statistics from the United Nations, and 79 per cent of them come from Syria, Iraq, Afghanistan and Eritrea.

For Germany, the move to get tougher with economic migrants is part of making sure there are resources to deal with the flood of bona fide refugees. In Bavaria, for instance, the state government recently opened two centres aimed at asylum-seekers from the Balkans. The goal is to shorten the time it takes to process applications and repatriate claimants from months to weeks – or even days.

Two more such repatriation centres for people from "safe origin" countries are already in the works, said Ulrike Sparka, a spokesperson for the Bavarian Ministry of Social Affairs. The capacity to house refugees is nearly exhausted, she said. Therefore, the ministry's focus is on creating space in centres for those with good prospects of staying in Germany for the long term.

Refugee advocates warn that such fast-track procedures risk denying protection to those who merit it, even if the country they come from isn't experiencing violent conflict.

Those arriving from the Balkans want to make the trip despite the slim odds of getting permission to remain in Germany. "Even a temporary stay in the German social system is a relief from conditions back at home," says Mark Swatek, a lawyer in Berlin who specializes in asylum cases.

The push to separate out economic migrants is also a dicey business for Germany because the country actually needs an influx of workers to prop up its aging, shrinking labour force. However, it wants such workers to come via regular immigration channels.

"The question is how to lower the pressure on the asylum path by providing the means for normal labour migration," said Orkan Koesemen, a migration expert at the Bertelsmann Foundation. For people outside the European Union, it takes an actual job offer in Germany in order to receive a work visa, he notes, which is a very high bar for nearly all would-be immigrants.

Meanwhile, he said, it makes sense to keep the question of economic migrants separate from the issue of refugees. "You can understand people who say, 'I am living in poverty, I don't have a chance, I want another chance in life,'" said Mr. Koesemen. "But by law, this is not a reason for giving asylum." 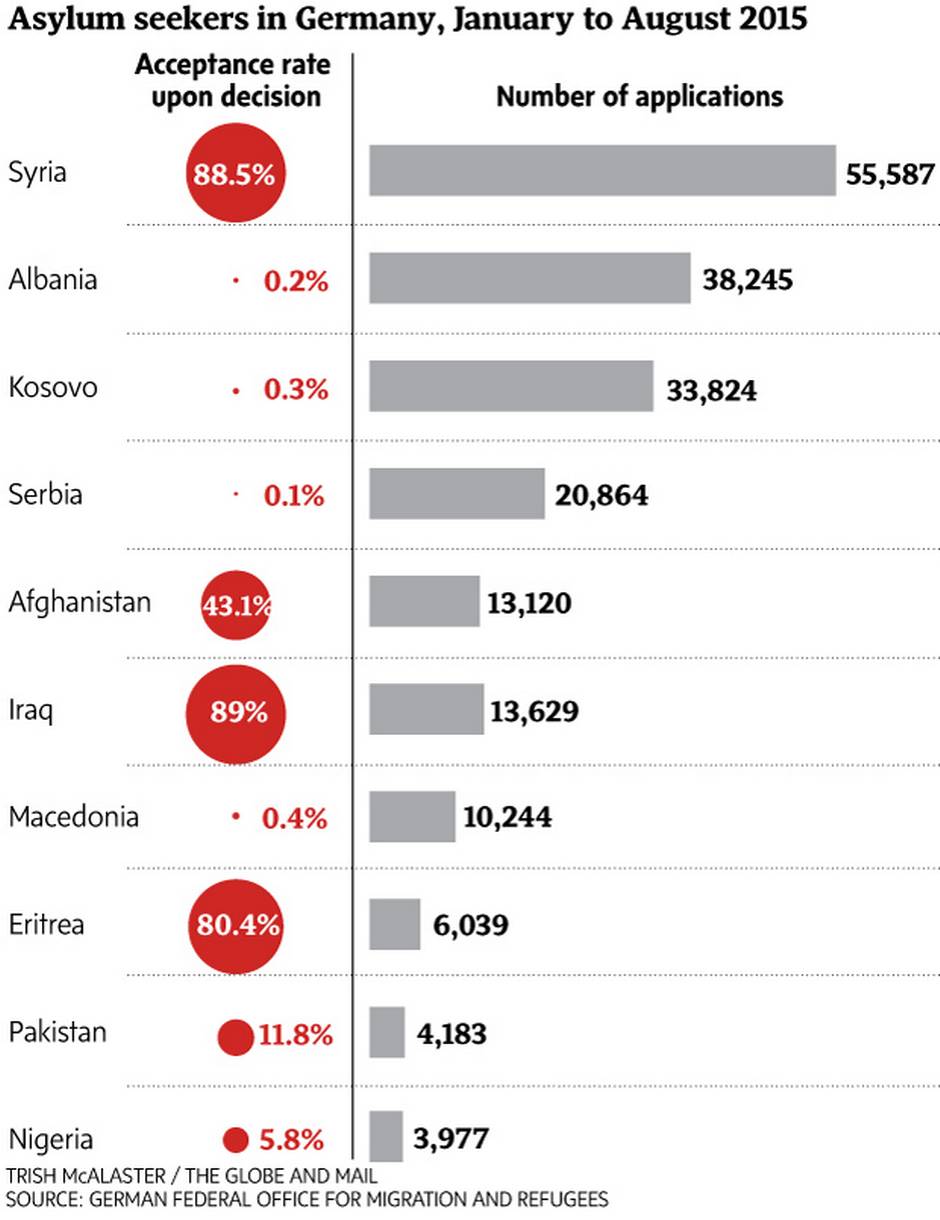