The world is a small place for someone who can't read. Basic signage, medication labels, job applications: They all become inaccessible, and the chances of a healthy and productive life are slim.

Life expectancy increases as a result of literacy and the United Nations considers it a human right.

In 2010, the global rate of adult literacy climbed to 84 per cent. Still, the United Nations Education, Scientific and Cultural Organization, the agency that monitors literacy around the world, cautions that even as the world celebrates International Literacy Day this Saturday, there are still reasons for concern.

There are 775 million people in the world who are illiterate, with another 152 million children set to follow in their footsteps because they aren't attending school.

After across-the-board gains between 1990 and 2000, the world literacy rate climbed from 76 per cent to about 82 per cent. Progress has slowed in the decade since. Several countries have plateaued, and only three – China, Indonesia and Iran – are expected to reach the international goal of cutting illiteracy rates in half by 2015.

In order to reach that target, 6 per cent of the world population, or more than 360 million people, will have to become literate. That's like teaching the entire population of the United States and Canada to read and write, in just three years.

"It's a staggering number," said Mmantsetsa Marope, director of learning at Unesco. "We have made progress but it's substantially inadequate progress."

The struggle for literacy is in many ways a struggle for gender equality: Women account for nearly two-thirds of those who can't read.

There are many barriers. Families living in developing countries often struggle to pay school fees, and are sometimes forced to chose which child to send to school. Boys are the preferred choice, as girls are seen as valuable household help for domestic chores.

Countries that are making progress are doing so by educating females. For example, only 17 per cent of women in Nepal could read in 1990, but by 2010, that number had climbed to 48 per cent.

Signs of hope emerge in literacy rates of the world's youth. Nearly 90 per cent of the population between the ages of 15 and 24 are literate, compared to 84 per cent of adults.

It's a trend consistent across much of the globe, with exceptions such as the Democratic Republic of the Congo, where violence and conflict has destroyed schools and displaced children. (Hence the themes of this year's literacy day: literacy and peace.)

Many in developed nations are waiting to see how the spread of smartphones and technology will have an impact on youth.

"We're writing more than we ever had before," Ms. Eaton said. "We're not relying on telephones as much, we're texting and we're going online."

There is some concern, however, that jargon and spelling shortcuts that are pervasive in youth culture may contribute to a literacy decline.

Literacy rates in Canada are high – around 97 per cent – but there is a debate about what that measure really means. Ideas about literacy have shifted, and while measures once focused on a person's ability to decipher characters and read text, the bar has been raised to consider economic productivity.

"There's learning to read and then there's reading to learn," said Margaret Eaton, president of ABC Life Literacy Canada. "Not enough Canadians have that skill."

In 2008, her organization authored a report that raised concerns about whether Canadians, including those who have graduated high school, can read well enough to be comfortable with new written information or doing computer work. The report relied on Statistics Canada data that showed 48 per cent of adults age 16 and older didn't have the literacy skills needed for the working world. The report noted that while many were new immigrants, native-born Canadians with high-school diplomas also had difficulties.

ABC commissioned a market-research group this May to survey executives, 80 per cent of whom said they could not find qualified employees. One of the most common lacking skills they described was literacy.

"There are jobs that are going empty even though we have high unemployment because there aren't the people who have the skills," Ms. Eaton said. 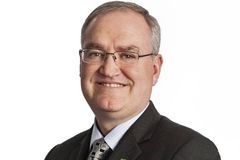 Opinion
Reading is more than a black-and-white issue
March 11, 2005
Follow Kate Hammer on Twitter @katiehammer
Report an error Editorial code of conduct
Due to technical reasons, we have temporarily removed commenting from our articles. We hope to have this fixed soon. Thank you for your patience. If you are looking to give feedback on our new site, please send it along to feedback@globeandmail.com. If you want to write a letter to the editor, please forward to letters@globeandmail.com.
Comments