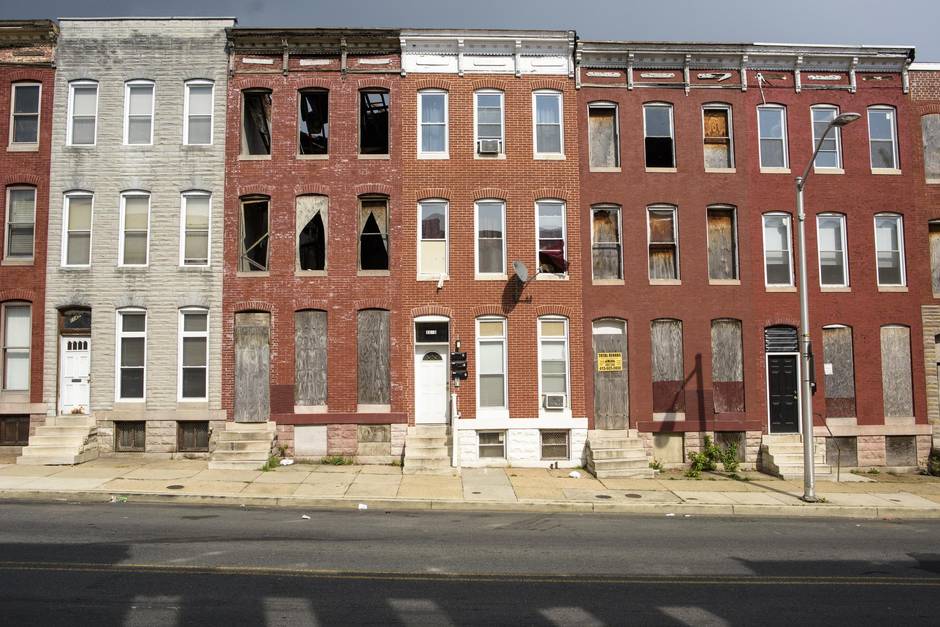 A block of historic three-story rowhomes on N. Carey Street in the Sandtown neighborhood of Baltimore. (Photos by Matt Roth for The Globe and Mail)

Baltimore’s Frederick Douglass High School is an African-American hall of fame of sorts. Future jazz giants Billie Holiday and Cab Calloway sat in these classrooms. So did Thurgood Marshall, who went on to become the country’s first black Supreme Court justice.

Now part of a supported housing program, Douglass is attached to Penn North, a community program for rehabilitation and personal development. It’s the oxygen to the unsettled heart of Sandtown-Winchester, a blighted neighbourhood that has become a national scandal. One of Sandtown’s residents, Freddie Gray, died in police custody two weeks ago; the case was ruled a homicide on Friday.

Like many other afflicted areas across the country, Sandtown represents the intractable nature of poverty and race, but it also offers a unique narrative about failures and successes, one that can either harden coarse stereotypes or shake the bedrock human affinity for redemption.

Penn North’s chief operating officer, Steve Dixon, is one example. Once one of the city’s biggest heroin and cocaine dealers, he became addicted. He served prison time, was homeless, and then cleaned up in the early ’90s, earning two master’s degrees: one in African history, another in drug and alcohol counselling. 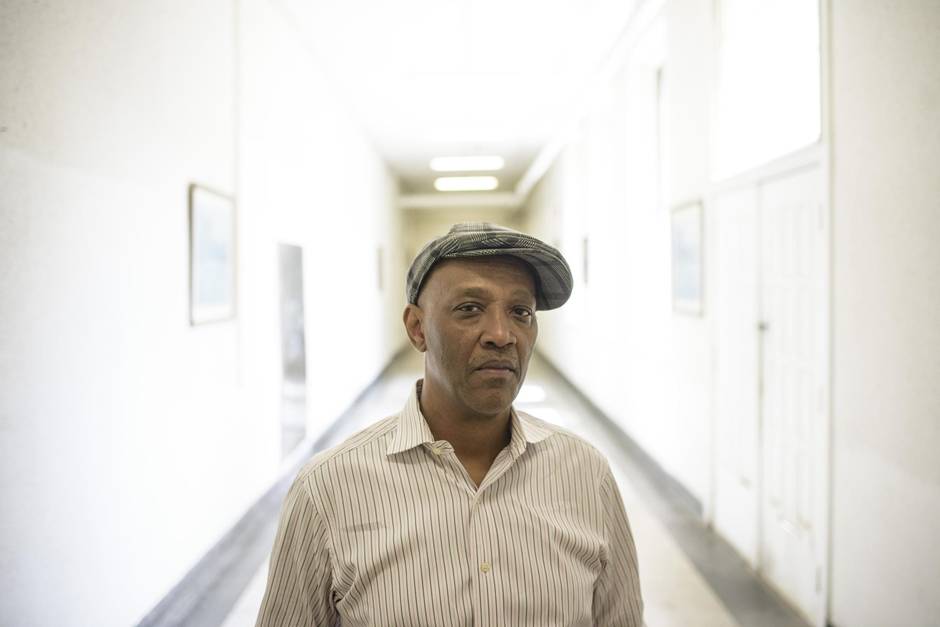 While roaming the halls of Douglass, he introduced me to Susan, an older woman with a strained walk. Mr. Dixon explained that Susan served nearly three decades in prison after killing her abusive husband, and now she has a place to live and a job, selling alternative energy products door-to-door.

When she started talking about work, her body loosened, an improbable smile gathering in the corners of her mouth. “You should see her dance – remember she didn’t dance for 29 years,” Mr. Dixon said.

Penn North isn’t only about giving belated starts to ex-convicts. As they like to say around here, nothing stops a bullet like a job. There are also vocational classes that help residents build a résumé, grapple with application rejection and dress for success.

The community centre is also a touchstone for Freddie Gray’s family, where a repast was held for more than 200 of his friends and family last Monday. This was while protests raged and the martial forces moved in with Humvees. “It was like the Transformers were invading the Earth,” said Blaize Connelly-Duggan, the CEO of Maryland Community Health Initiatives, which oversees Penn North. “Who did they think they were fighting?”

(The next day, magician David Blaine made a surprise appearance, teaching card tricks to Bloods and Crips.)

Like Baltimore as a whole, Sandtown is not monolithic. It’s a hodgepodge of different income brackets, ranging mostly from poor to really poor. Around any corner, there are hairpin turns of menace. Down the street from Penn North was a major drug-dealing intersection called CBS, an acronym of a spot made infamous by the HBO program The Wire. (Almost everyone who works here seems to know one character or another who inspired its creator, David Simon.) On one block there can be boarded-up homes, collapsed homes with their innards revealed, newer homes.

Two men from the centre, Anthony Thomas and Lamont Purnell, showed me the boarded-up remains of a CVS drug store that was torched earlier this week. As recently as last month, there were omens that this area was about to boil over, but Mr. Purnell followed events in Ferguson, Mo., and told himself they would never happen in Sandtown. This was where he banked and ran errands.

We witnessed a group prayer for peace and for the city of Baltimore. Mr. Thomas, however, was defiant: “I’ll pray for peace, but I won’t pray for Baltimore. It is a city that will rob your heart and steal your dreams. That’s my Baltimore.” 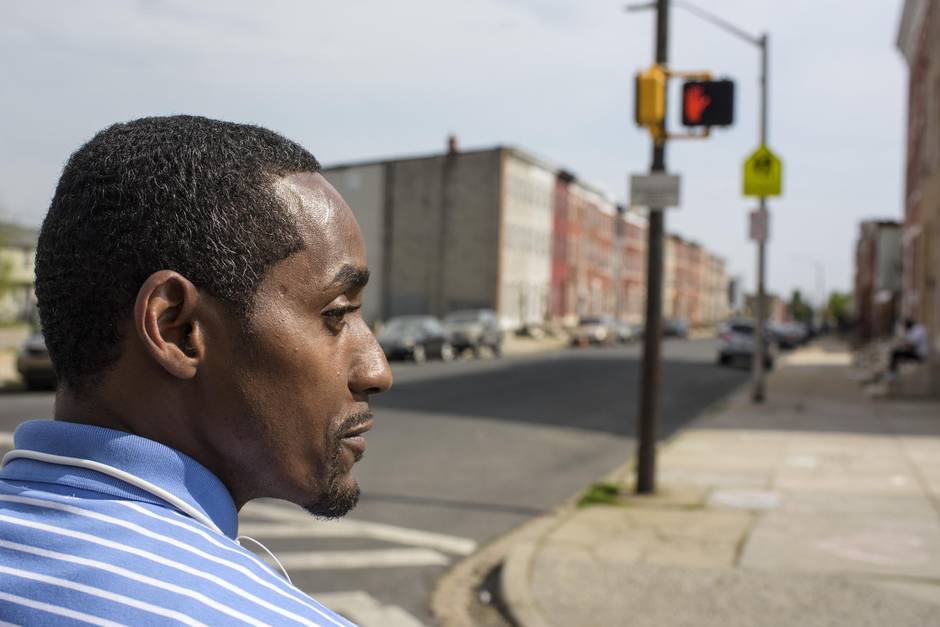 Anthony Thomas, 44, was born and raised in Sandtown.

Baltimore’s unrest could be chalked up to the same kind of tensions that divide other U.S. cities: poor getting poorer, despair and racism, or all of those tied together.

Sandtown-Winchester is also part of a wider trend in which poverty is fanning out across the country. According to the centrist Brookings Institution, the population of census tracts where at least four in 10 people live at or below the federal poverty line – the people who face heightened risk factors such as violent crime, dilapidated housing and poor schooling – increased by 72 per cent between 2000 and 2012.

Like New Haven and Yale, or Harlem and Columbia, Baltimore is home to a wealthy, highly ranked university. Johns Hopkins (where I was once a graduate student) is a massive civic employer, and its presence is spreading across the city, a gentrification process that concerns many urban advocates.

But “Charm City,” as Baltimore is called, has a unique narrative of urban renewal projects and representative government. After the 1968 riots that followed the assassination of Martin Luther King, Jr., there was swift white flight, and nowadays more than six in 10 residents are African-American. Unlike Ferguson and other areas riven by violence and racism, Baltimore’s African-American community has enough numbers to influence political dynamics: Mayors, police chiefs, city councillors, state senators are black. So is the city’s chief prosecutor, Marilyn J. Mosby, who on Friday announced criminal charges against six officers involved in Mr. Gray’s fatal arrest.

The city also had a history of muscular civic intervention. In the early ’90s, when I was there, one of Baltimore’s energetic visionaries, the late James Rouse, brought great aspiration to what even then seemed like a city on the verge. A deep believer in integration and philanthropy, the developer was the power behind the overhaul of the once-ghastly harbour, now a tourist attraction. Also a big believer that shopping destinations can bring people together, he spearheaded the Mondawmin Mall.

In the late ’80s, Mr. Rouse pushed for Sandtown’s transformation with new housing, employment programs, prenatal care. “He said this is going to be the important thing I do in my life,” his biographer, Paul Marx, told me this week. Mr. Rouse’s foundation kicked in $60-million; public and private funding contributed another $70-million. He rallied the then-mayor, Kurt Schmoke, to support his efforts.

Ultimately, the project was seen as a failure: too much, too soon, without enough deep knowledge of the area, was the hindsight criticism. Others said the project died with Mr. Rouse, who passed away in 1996. It was also too self-contained and lacked a holistic approach. “They needed a source for jobs. They weren’t going to get those in the neighbourhood,” said Lisbeth Schorr, who wrote about the project in her book, Common Purpose.

Now one in two Sandtown residents is unemployed and one-third of the homes are vacant. One out of four juveniles was arrested between 2005 and 2009. The mortality rate for 25- to 44-year-olds – Freddie Gray was 25 – is 44 per cent higher there than for the same demographic elsewhere in the city. When The Baltimore Sun revealed some of these statistics last month, it caused an outpouring of helpnessness and fury. Then after Mr. Gray died, things erupted. Mondawmin was looted. Sandtown was in flames. 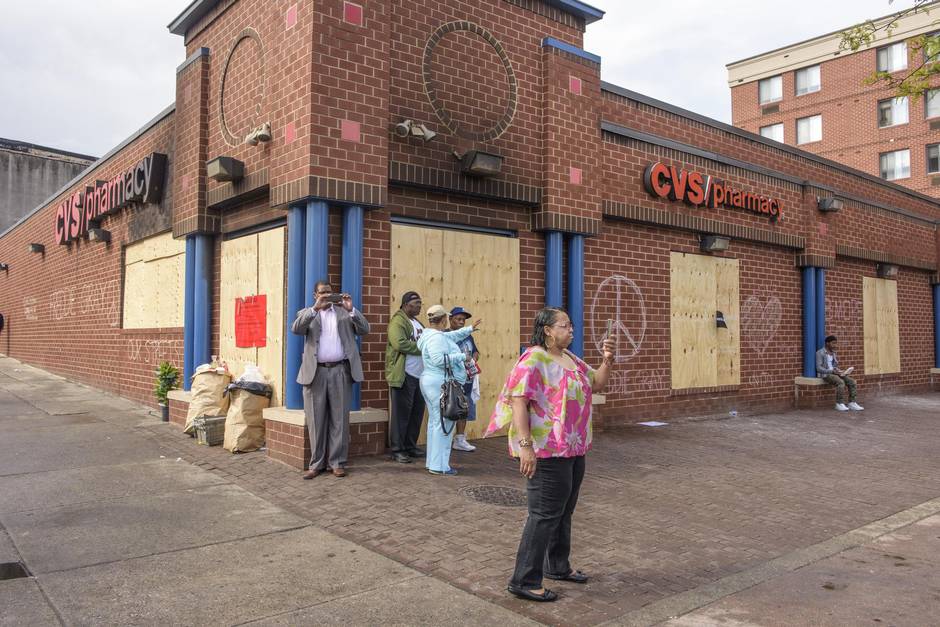 People take pictures in front of the infamous burned out CVS.

Baltimore isn’t a one-slum city. It has many mini-Sandtowns, pockets of poverty that can quickly flip from area to area. “It’s a city that has an amazing spirit for its neighbourhoods, but that’s also what’s most pernicious,” said Derrell Bradford, an Ivy League graduate who as a teen commuted from Sandtown to the elite boys’ school St. Paul’s. “It’s like two cities in a knife fight: close and deadly.”

Mr. Bradford, now a New York-based education advocate for the underprivileged, said people say they hate the idea of being segregated here but always will be segregated: Similar people want to live among each other.

Seeking a contrast to Sandtown, I visited a scotch bar with the overly symbolic name of Birds of Feather in Fell’s Point.

An eerie quiet had settled over downtown, punctuated by the grinding of helicopters, the Pac-Man bleeps of police car sirens. Highways were blocked off by lines of policemen, and a strict 10 o’clock curfew was in effect. Even fauxhemian, largely white Fell’s Point was serenely silent. Inside Birds of a Feather, three people at the bar talked about the virtues of firearms. They fantasized about leaving town for good, or least a long fishing trip.

When I told them I had just been in Sandtown, a warm woman named Renata Ramsburg told me she was a former parole officer. One of her clients, she said, was former drug trafficker Melvin Williams, an actor on The Wire.

Ms. Ramsburg told about her own tribulations as little girl. Her mother was sick. She was put in foster care. But she overcame it all and lived a middle-class life. Anyone can do it if they have fire in the belly. It was time for the U.S. to give up its entitlements such as welfare. “There is way too much white guilt,” she said.

We could have continued talking, but I needed to leave. It was getting late, and there was a curfew to observe.