Hong Kong's top political leader on Saturday warned that he is prepared "to take all necessary actions to restore social order" if demonstrators on the city's streets do not back away to let students and government employees return to normal life on Monday.

The warning from Leung Chun-ying came the day after protesters were punched, kicked and sexually violated, some by thugs with connections to the city's criminal underworld.

Mr. Leung condemned "all violent acts" but said if Friday's tensions continued, "the situation may probably evolve into a state beyond control."

Shock over the violence also drew large crowds back to the streets Saturday night amid anger at police, who protesters accused of letting combatants off easy. Some were loaded into taxis rather than paddy wagons, they said. A video posted to Youtube showed a man molesting at least two women before being politely led away by police. It appeared he was subsequently released.

Social media users, meanwhile, set out to identify and, in at least one case, publish address information for those taken away by police for the attacks Friday night. The violence also caused protest leaders to cancel a meeting with government, amid suspicions that the thugs had ties to authorities, a charge Hong Kong's Secretary of Security adamantly denied. The Mong Kok area where attackers with triad ties were arrested Friday is an area where many triad gangs are active, offering a potential alternative explanation for why they may have been there.

By Saturday, calm had largely returned to streets. But as the masses turned out in force, their ranks included many adherents losing faith that their quest for a more democratic Hong Kong will achieve much of anything.

The "Umbrella Revolution" has not folded — on Saturday, tens of thousands returned in force to chant, cheer and press for Beijing to rescind a proposal for what critics call "fake democracy." One man cheerily told passersby "history is being made here."

But as the protest reaches its one-week mark, it is having to face the reality that it has achieved almost none of what it sought — and likely never will.

At the Mong Kok protest site that saw most of the violence Friday, one speaker tacitly acknowledged as much.

This is "a long war," he said. "What we are doing here is gaining support from all over the world. So keep hanging on."

"No matter how long we stay here, I don't think the government will listen," acknowledged Manhong Lam. Government has the "upper hand," he said, and their strategy of waiting out the protests appears to be working. With each passing day, the movement faces a mounting risk that "we will lose our momentum," he said.

Already, past days have seen a distinct waning in numbers of people coming to join the barricaded sites that have been the movement's heart. Two of those sites have now closed; three remain, but some of those coming out are dispirited.

"At this point, I really don't see how it's going to end in a good way for the citizens, in the sense that I don't see how we can actually get what we want," said Pius Hui, who has spent the week attending various protests.

Monday is a particularly important day, as it will see not just government officials but many protesters return to their jobs and classrooms. The great crowds that came on to city streets in the past days did so during a week when the city had two days off for China's National Day holiday. Next week is a regular work-week.

"Honestly, Hong Kong people are very busy, because they have to go to work and study. They have things to do. So it's difficult for people to come out," said Peter Wong, a university student who joined the protest movement two weeks ago, at the outset of a student strike that preceded the takeover of city streets.

He is "quite worried" about how the numbers may diminish Monday, he said.

"Still, we have to fight for this," he said. "Because if we just stay at home, then nothing will change." 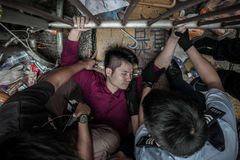 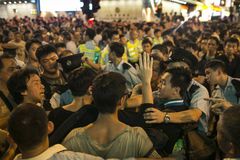 Hong Kong's students explain why they're on the streets
October 3, 2014
Follow Nathan VanderKlippe on Twitter @nvanderklippe
Report an error Editorial code of conduct
Due to technical reasons, we have temporarily removed commenting from our articles. We hope to have this fixed soon. Thank you for your patience. If you are looking to give feedback on our new site, please send it along to feedback@globeandmail.com. If you want to write a letter to the editor, please forward to letters@globeandmail.com.
Comments