Ukraine's politicians embarked Sunday on the gritty detail of turning revolution into reality, after an extraordinary week that saw around 100 people die during clashes and embattled President Viktor Yanukovych try to flee the country after being relieved of his duties by parliamentarians.

The many challenges confronting the nation were driven home early in the morning when Members of Parliament arrived at the parliament to try and form a new government. In a sometimes noisy session, they handed presidential powers to the speaker of the legislature; repealed several laws from the Yanukovych era, including rules limiting free speech; and removed several key cabinet ministers who were Yanukovych loyalists.

The new caretaker attorney-general also launched an investigation into last week's violence which could see Mr. Yanukovych arrested. And there is so much more to do, including forming a unity government, naming a prime minister and holding presidential elections in May.

"It is a relaunch of the country," said Andriy Shevchenko, an independent MP who is aligned with the largest opposition party called Fatherland. "You are witnessing not just the collapse of the dictatorship, you are witnessing the country getting rid of its post-Communist legacy. It's not about running away from Russia. It's about running away from the Soviet Union and the post-Communist legacy."

Overshadowing their work were grim reminders of the country's shaky economy and the complex geopolitics that intertwines nearly every event in Ukraine these days. During Sunday's proceedings, the speaker, Oleksandr Turchynov, bluntly told MPs that the economic situation was "catastrophic."

"There are no funds in the state treasury account," he said. The International Monetary Fund, the European Union and the United States have all talked about providing financial support, but there could be strings attached such as austerity measures and changes to the way the currency is pegged to the U.S. dollar, which would likely cause inflation.

That feeds into the push-pull between the West and Russia, which provides Ukraine with much of its natural gas and is an important export market. Most of the opposition in Ukraine wants the country to join the EU while Mr. Yanukovych drew the country closer to Russia.

On Sunday, Russian Foreign Minister Sergei Lavrov criticized Ukrainian MPs for "seizing power" and reneging on a deal reached Friday that could have seen Mr. Yanukovych remain in office until December. That deal was approved by parliament but met fierce resistance from thousands of protesters who have been demanding Mr. Yanukovych's immediate removal for months. In a strange turn of events, Mr. Yanukovych apparently offered to resign on Saturday, then withdrew it, but not before MPs seized on the offer to effectively accept his resignation.

"We want to live in a European democratic country," opposition party leader Vitali Klitschko said in an interview Sunday. "We need support," he added referring to short-term financial aid from Western nations. "We need structural support. We have huge potential in Ukraine but we have to use this potential. We need the people who can be helpful in this situation."

Another issue for the country is that no clear leader has emerged from the months of protests. Mr. Klistschko is well known in the West as a former heavyweight boxer, but he is considered something of a lightweight by many Ukrainians and he has been soundly booed several times while appearing on a stage in Kiev's Independence Square, where the protesters have been based. Former prime minister Yulia Tymoshenko, who is something of a darling in the West, also has been given a lukewarm reception since her release from prison on Saturday. Some have been outright hostile toward her, including a small group who stood outside parliament Sunday with signs urging MPs not to name her prime minister.

"I think that Yulia is a part of the old political system," said Oleksandr Turevskyi, a software developer from Kiev who held a sign that said: "Yulia = Putin."

"She already was prime minister and she did a lot of bad things for Ukraine."

On Sunday Ms. Tymoshenko said she did not want to be considered for prime minister, but she has expressed an interest in running for president in May.

Then there is the problem of Mr. Yanukovych, whose whereabouts is unknown but who has refused to resign and has called parliament's actions a "coup." His arrest could cause more grief with Russia and lead to tension in regions within Ukraine where he has support.

All of which means no one expects the protest movement to end any time soon. Tens of thousands of people strolled through Independence Square Sunday, many carrying flowers, candles and crosses which were piled on several makeshift memorials to the dead. A long line of flowers ran up a street next to the Hotel Ukraine, where 12 protesters were shot by police on Thursday, and a priest conducted a memorial service.

For the first time in months, the square had a family-friendly feel as parents walked with small children and several kiosks and cafés opened. One man was selling souvenirs, including photos of the protesters throwing rocks and clashing with police. After months of burning tires, shifting barricades and bloody confrontations, the square seemed almost normal. No one was making Molotov cocktails, once an almost constant occupation of protesters. No one was pulling up cobble stones from the sidewalks and piling them up to throw at police. And stacks of tires were turned into impromptu flower pots.

"The mood here now is totally different," said Georgy Mayorov from Kiev as he walked through the square. People are sorrowful, he added, and no one is declaring victory just yet which is why the protesters won't leave. "I think it's not over," he said. "Maidan [the central square] is really something as a guarantee of the demands of the people. … Ukraine really has a chance and we really need to use it, because these chances are not given to many nations." 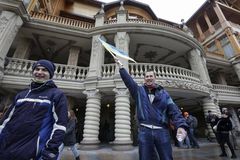 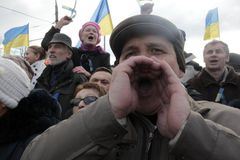 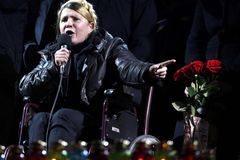 Welcome to Lviv, the ‘free’ Ukrainian city protesters are dying for
February 23, 2014 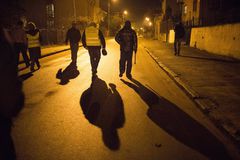