Until a few days ago, not many people outside Crimea had heard of Sergei Aksyonov. Even many of his fellow Crimeans didn't pay much attention to him.

But the 41-year-old businessman and pro-Russian activist has become a pivotal player in the geopolitical drama unfolding in Crimea with his fiery language and declarations that the peninsula is no longer part of Ukraine.

Mr. Aksyonov was elected prime minister of Crimea last Thursday by the autonomous territory's parliament – after gunmen surrounded the parliament building and stood in the chamber while MPs voted. He was not a random choice. Mr. Aksyonov heads the fledgling Russian Unity Party in Crimea and despite holding just three seats in the 100-seat parliament, his election was assured with the Russian military on the doorstep.

Since then he has moved quickly to pull Crimea toward Russia. He has welcomed Russian troops, called for financial support from President Vladimir Putin and set a date for a referendum on Crimea's independence. He has also labelled the newly formed interim government in Kiev "mad" and suggested that ousted Ukrainian president Viktor Yanukovych, who fled to Russia and is wanted by Ukrainian police, remains the country's rightful leader.

On Tuesday he went further, declaring that he is now fully in charge of Crimea and demanding that all Ukrainian soldiers in the territory join a newly formed Crimean army, or face prosecution. He also insisted that Crimea is functioning normally, with government workers getting paid and social benefit cheques arriving, although he declined to say where it has so far gotten the money. "We don't trust the Kiev government and we asked for help from the Russian Federation," he told reporters.

Just what Mr. Aksyonov is trying to create remains unclear. He said everything will be clear after the referendum, slated for March 30. But the outcome is likely to raise even more questions. Will Crimea become an independent country, a ward of Russia or something else inside Ukraine?

It's hard to imagine Crimea existing on its own without substantial support from Russia or Ukraine. The territory's economy relies mainly on agriculture, tourism and a few large manufacturing plants, none of which have been doing very well lately. Because of its rundown, Soviet-era infrastructure, Crimea is almost entirely dependent on mainland Ukraine for water, electricity and food. There are signs of decay and neglect almost everywhere, with abandoned buildings and shabby housing scattered across many towns.

And then there are the Tatars.

Although they are the indigenous population, the Tatars make up just 15 per cent of the territory's two million inhabitants. That's largely due to mass deportations by the Soviets after the Second World War, punishment for allegedly helping the Nazis. Roughly 300,000 returned to Crimea after Ukraine gained independence in the early 1990s.

Many are now living in fear of Russia's recent move in Crimea and they are convinced the referendum will be rigged to get whatever result Mr. Aksyonov wants. The community already feels marginalized and further domination by the Russia-speaking majority has sent many fleeing to Istanbul, Kiev or elsewhere in Ukraine.

"We believe this is catastrophic for our people. This is really a catastrophe," said Abduraman Egiz, who is an elected member of the Crimean Tatar Council, which represents the community. The poor showing of Mr. Aksyonov's party in the last election is an indication, he says, that few in Crimea support Russian integration even though the region is overwhelmingly Russian-speaking.

Tatars, he added, already feel under pressure. The Russian language dominates here – on street signs, in conversations and at school. Ukrainian is barely spoken at all, let alone Crimean Tatar. There are religious divisions as well, since Tatars are mainly Muslim while most Crimeans are Christians, and age-old Soviet attitudes have been slow to change, meaning most Tatars are shut out of government jobs. As a result the community sticks largely together, running small businesses and living near each other.

If Mr. Aksyonov persists, Mr. Egiz said he worries about violence. This is a troubled corner of the world he pointed out citing ethnic conflicts in the former Yugoslavia, the Balkans and Chechnya. Already Tatars in Crimea are guarding their shops and homes for fear of attack. Ethnic violence "becomes very messy and you cannot control it, as history shows," he said.

Some militant groups in Russia and Chechnya have already taken an interest in events in Crimea. And inside the region there is opposition to the Russian takeover. In Bakhchisaray, about 60 kilometres south of Simferopol, a crowd gathered outside a Ukrainian military base surrounded by Russian soldiers, demanding they leave and criticizing a local official who was representing Mr. Akyonov's new government. And in Belbek, near Sevastopol, several Ukrainian soldiers said they wouldn't join the new Crimean army. "We don't have a country of Crimea, we have a country of Ukraine," said Lieutenant Igor Filoneko. "I am Ukrainian."

Mr. Aksyonov went to lengths Tuesday to reassure Tatars that they will be part of the new government in Crimea and their culture protected. Mr. Egiz was not convinced. "The only choice for us is Ukraine." 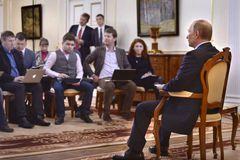 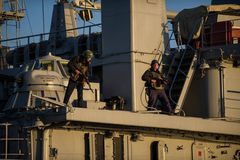