You can smell Horlivka before you see it: the acrid output from the aging chemical plants and machinery factories that still limp along, though only at a fraction of the pace they once did.

Then you hit the jarring, metre-long potholes and get a glimpse of the city's grim skyline of crumbling apartment blocks. The Soviet Union fell 23 years ago. Horlivka has kept falling ever since.

The next thing you sense in Horlivka is anger. Armed men have taken over the city's main police station, and have built a wall of tires around it. Checkpoints flying the black-blue-and-red banner of the self-proclaimed Donetsk People's Republic, often alongside the flag of the Russian Federation, block the roads into the city.

But residents of Horlivka and other parts of eastern Ukraine don't really want to live in an independent Donetsk. In many ways, they don't even want to live in today's Russia, although there's a lot of admiration for President Vladimir Putin here.

What they want is to go back in time, to when the Soviet Union still existed and Horlivka residents had jobs producing things that people in other places wanted to buy.

"We don't need the $30-billion [in financial aid] that the Ukrainian government is asking America and the European Union for," said Oleg Korenyev, whose handmade badge identifies him as the deputy commandant of the pro-Russian militants occupying Horlivka's police station. "Just $2-billion would be enough, if it went to modernizing our factory equipment and fixing our roads and buying new ambulances."

The battle for Ukraine is often defined in Cold War terms, with Ukrainians identified as belonging to either the pro-Russian or pro-Western camp. There are also linguistic and religious elements to the struggle. But in many ways, this argument is really between those who see themselves as Ukrainian – who want to see the country break free from its Soviet past – and those who wish the USSR still stood.

Those in the latter camp are often older residents, who received a Soviet education growing up, or those who were among the economic losers when the USSR collapsed and independent Ukraine lurched to life in 1991.

In much of the Donbass region – as the coal basin around the city of Donetsk is known – Soviet times meant a job for life, a guaranteed pension and free medical care. The coal miners and factory workers who lived here were lionized as heroes of Soviet labour. Today, more than half of the 230 coal mines here have been closed for good. Average salaries in cities such as Horlivka are barely $100 a month, just above the cost of living.

Mr. Korneyev says life would get better if the Donetsk region joined the Russian Federation, where average salaries and pensions are higher than in Ukraine.

Conversely, many here believe the region's economic crisis would accelerate if the new government in Kiev pursues its promised course of integrating with the EU. They know the factories here aren't clean and modern enough to meet strict EU environmental standards. More coal mines would close. The few remaining jobs here would disappear, especially if Russia retaliated by closing its market to Ukrainian products.

Residents are angry about the pro-Western revolution in Kiev, which they believe was led by hard-right protesters whose forefathers sided with the Nazis – and against the Soviet Union – during the Second World War. But they do award some of the blame to Moscow-backed Viktor Yanukovych, a Donetsk region native who was president for four years before he was ousted by protesters in February. Mr. Yanukovych now lives in self-imposed exile in Russia.

"Yanukovych promised he would modernize the industry here, but we still have the same machines and factories that were built during the Soviet Union," said Dima, a 29-year-old who did not want to give his last name and who helped seize the city hall in Mr. Yanukovych's hometown of Yenakieva, a short drive from Horlivka. "We don't believe the people in Kiev will do any better. Only Putin will do these things for us. Putin should be our president."

Mr. Putin has squelched dissent and free speech during the 15 years he has been president or prime minister of Russia. But he remains widely popular there – particularly in Russia's own rust belt – because of the stabilnost, the economic stability, he has deliveredover the same period.

Now, many in the region say they want the stabilnost they see across the border. "The Donbass is very different place from the rest of Ukraine. Donbass people crave stability," said Yuri Koval, a professor of political science at Donetsk National University. "If you ask people whether they want stability or freedom, they would choose the first. If you ask whether they would choose their job or their life, they would say their job."

Opinion
Mere diplomacy is no answer to Russia’s threat to democracy
April 21, 2014 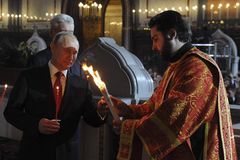 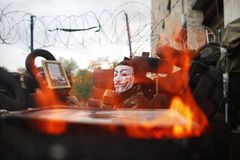 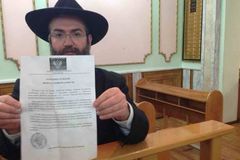