The future of Ukraine is expected to be handed to a lawyer with a doctorate in economics and a lengthy career in government but whose lack of charisma leaves many Ukrainians feeling cold.

Arseniy Yatsenyuk, who leads the country's largest opposition party, is expected to be appointed prime minister once a new government is formed on Thursday. The post is about to become the most powerful in the country now that Ukraine has reverted back to a previous constitution, which puts more power in the hands of the prime minister than the president.

The change was part of the fallout from the recent removal of president Viktor Yanukovych, who had revised the constitution and consolidated authority in the presidency.

Few can argue with Mr. Yatsenyuk's credentials. A trained lawyer and economist, he has served as governor of Ukraine's central bank, minister of economic affairs, speaker of the parliament and foreign minister. He speaks fluent English and is seen by many in the West as the most capable of Ukraine's three opposition party leaders.

If he's chosen to steer Ukraine until new elections in May, he would face enormous challenges.

The treasury is down to about $1.5-million (U.S.) and the economic conditions have been called "catastrophic." Corruption is widespread and the interim minister of finance has indicated the country needs more than $30-billion over the next two years to stay afloat.

There's also the issue of Mr. Yanukovych, who is now on the run. The parliament passed a motion Tuesday calling on the International Criminal Court to take charge of the case against him and others as a "crime against humanity." That could raise the ire of Russia, which saw Mr. Yanukovych as an ally and has already condemned the parliament's actions, and it could inflame tensions in Russian parts of Ukraine.

Mr. Yatsenyuk would also face tricky negotiations with the European Union and United States over a potential bailout package and possible austerity measures, and concerns that Russia could cut off badly needed natural gas supplies. And at home, he would also have to assemble a coalition cabinet, making sure to balance competing interests to bring in new blood, and he has to prepare for the presidential elections and parliamentary elections likely this fall.

In a brief interview Saturday, Mr. Yatsenyuk was exceedingly careful, refusing to call the removal of Mr. Yanukovych a victory and playing down speculation he might run for higher office. "I want to be very cautious on every particular issue," he said adding that his priorities are improving the country's tattered economy and steering Ukraine toward membership in the EU. "This is the real mess. And I do understand tremendous and unbelievable political and economic challenges my country is facing."

While those tempered statements may reassure Ukraine's lenders and allies, Mr. Yatsenyuk's rather nerdy image hasn't won over many voters.

He got barely 7 per cent of the vote when he ran for president in 2010, when Mr. Yanukovych was elected. And while his party, called Fatherland, is the second largest in parliament, it was largely the creation of Yulia Tymoshenko, the Orange Revolution figure who was released from jail last weekend after serving more than two years on charges many say were trumped up by Mr. Yanukovych. Now that she is free, Mr. Yatsenyuk's role in the party is unclear.

Still, the 39-year old has tried to rework his image during the recent uprising against Mr. Yanukovych. He offered uncharacteristically firebrand speeches from the giant stage in Kiev's Independence Square, the centre of the protest movement. Last month, he told the crowd that if Mr. Yanukovych refused to step aside "then we will go forward together and if it means a bullet to the head, then it is a bullet to the head."

Those words came back to haunt him when he returned to the stage last week after he and the other leaders had agreed to deal with Mr. Yanukovych that could have seen him stay in office until December. The agreement came a day after more than 80 people died in clashes with militia; the protesters bitterly opposed anything that fell short of Mr. Yanukovych's immediate removal and arrest.

When Mr. Yatsenyuk appeared on stage with the other leaders to try to explain it, the crowd shouted "Bullet to the head, bullet to the head." The next day, parliament voted to immediately remove Mr. Yanukovych from office and two days later an arrest warrant was issued.

In Kiev, as the parliament works to put together an interim government, some people are expressing mounting skepticism. Protesters fear that parliamentarians will simply replace Yanukovych loyalists with another group of old-guard politicians and nothing will change.

A crowd gathered outside parliament on Tuesday and many people held signs urging parliamentarians to make sweeping changes. "I don't believe them," said Petro Dobrianskyi, 22, an accountant who was among those in the crowd. Many opposition MPs are not any different from those ousted with Mr. Yanukovych, he added. "They have been here working since 2004, some from 2000, they had their chance but they did nothing."

He has little time for Mr. Yatsenyuk, calling him an opportunist and added: "What we want are professionals, young people …They forgot about Maidan [Independence Square]. They don't go there any more." 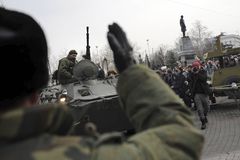 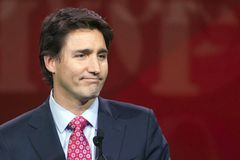 Globe in Kiev: In Ukraine, corruption is a fact of daily life
February 24, 2014 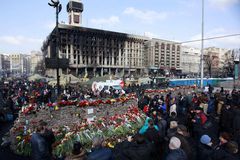 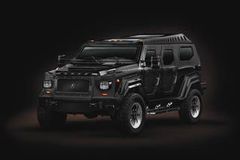