The rebel takeover of the key Congolese city of Goma has sparked fears for the future of one of Africa's biggest and most war-torn countries.

In the short term, the victory by the M23 rebels could trigger a wave of reprisal attacks on civilians in the city of a million people. Thousands of displaced people, in the chaos of the rebel advance, are fleeing out of Goma or into the city from rural camps.

In the longer term, the rebel victory could destabilize and weaken the fragile government of the Democratic Republic of Congo, opening the door for a foreign carve-up of eastern Congo, a mineral-rich region that has attracted rebels and invaders for many years.

The Rwandan-backed rebels, commanded by indicted war-crimes fugitive Bosco Ntaganda (known as "the Terminator"), walked into Goma almost unopposed on Tuesday after the city was abandoned by Congo's notoriously underpaid and unreliable army.

United Nations peacekeepers, who had deployed helicopters to strafe the rebels with cannons and rockets on Sunday in a futile attempt to slow their advance, appeared to give up and just stood by watching as the rebels took the city. French Foreign Minister Laurent Fabius said it was "absurd" that the 17,000-member UN force was unable to stop a few hundred rebels.

It's the first time since 2003 that rebels have controlled the city. Congolese soldiers were reported to be retreating southward after looting homes in Goma as they left.

The rebels have threatened to advance further in eastern Congo, targeting the major city of Bukavu to the south, which could lead to rebel control of most of eastern Congo.

The capture of Goma has the potential to ignite a broader war between Congo and neighbouring Rwanda, which is believed to be a key source of support for the rebels.

The International Crisis Group, an independent think tank, warned that the rebel victory "could send shock waves" through eastern Congo and could "relaunch open warfare between the DRC and Rwanda."

The rebel takeover will mean a huge boost in regional power for Rwanda. UN investigators say Rwanda is providing financial and logistical help to the rebels, including sophisticated weapons such as night-vision equipment and heavy mortars.

The fall of Goma will also put severe pressure on Congo's national government in Kinshasa. Protests have already erupted in the capital, with security forces firing shots and tear gas on Tuesday to disperse several hundred people who were angry at the rebel takeover. Protesters also attacked the headquarters of Congo's governing party and two UN offices in the city of Kisangani, and UN offices in the city of Bunia.

Jason Stearns, a leading Congo analyst, said the rebel advance in Goma may be intended to "nettle the government, underscore its ineptitude and hope that it will collapse from within."

The humiliating defeat of the UN and Congolese military forces in Goma will shine a spotlight on Rwanda's involvement, yet the international community will have little choice but to ask Rwanda for help in controlling the rebels, Mr. Stearns said.

Other analysts said the rebel capture of Goma could complicate international efforts to regulate the flow of "blood minerals" that finance wars and atrocities in Congo. With its unofficial control of the city, Rwanda could find it easier to smuggle minerals out of eastern Congo.

Mr. Ntaganda, the M23 commander, already controls several mines in eastern Congo and smuggles their minerals into Rwanda for export, according to an investigation last month by the advocacy group Global Witness.

Another report, by Oxfam, said the people of eastern Congo are "being subjected to an unprecedented level of financial exploitation, as belligerents loot and extort illegal taxes."

Meanwhile, the humanitarian situation in eastern Congo is growing worse as thousands of people flee their homes and some aid workers are withdrawn from Goma. Oxfam estimated that up to 100,000 people could be fleeing. A growing number of camps for displaced people are under threat as the fighting spreads, Oxfam said.

"The atmosphere in the city is tense. People are worried," said Grace Tang, a Canadian who heads the Goma mission of Médecins sans frontières (Doctors Without Borders). One camp, Kanyaruchinya, is now empty after about 60,000 people fled in panic, while MSF medical clinics around Goma have been deluged with thousands of desperate people, MSF said.

The UN children's agency, UNICEF, said it is "deeply concerned" about the deteriorating situation in eastern Congo, which is "putting children and their families at risk, leaving them exposed to physical harm and mental distress." It added: "UNICEF is particularly concerned about the psychological trauma faced by children, in addition to the risk of cholera outbreaks." 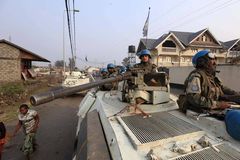