The police, backed by United Nations peacekeepers who were standing by, fired shots in the air and tear gas canisters to keep the chanting, stone-throwing demonstrators back from the presidential palace in central Champs de Mars square in Port-au-Prince. "Preval must go," the demonstrators yelled.

Tear gas canisters fell into a crowded tent camp in the square housing thousands of survivors from Haiti's devastating 2010 earthquake, and the stinging smoke sent women and children fleeing, the women howling angrily in protest.

A deciding second round of Haiti's presidential election is scheduled to be held on March 20 to choose a successor to Mr. Preval, whose five-year mandate nominally ends today Feb. 7 in the poor, earthquake-battered Caribbean nation.

A chaotic first round of UN-backed presidential and legislative elections held on Nov. 28 led to weeks of fraud allegations and sporadic protests, raising fears prolonged political unrest could jeopardize delivery of billions of dollars of post-quake reconstruction aid.

Mr. Preval, who could not stand for another consecutive term, has parliament approval to stay on if necessary until May 14 so he can hand over to an elected successor, but some opponents want him to step down in favour of a provisional government.

"Today at noon, Mr. Preval's mandate expires. He will no longer be the constitutional president. We are going to block the whole country to make him go," said Michel Frederick, 40, one of the demonstrators.

The protesters battled with dozens of riot police, setting tires and piles of garbage ablaze and trying to break through crash barriers in front of the quake-damaged white palace. The protesters also threw stones at UN vehicles.

The UN's top official in Haiti, Edmond Mulet, who heads the more than 12,000-strong peacekeeping mission there, told local media the international community was in favour of Mr. Preval staying on to hand over to a successor to be legally elected in the run-off vote.

"Rene Preval can and should stay in office," Le Nouvelliste newspaper quoted Mr. Mulet as saying. Mr. Preval's formal assumption of the presidency was delayed five years ago, and this meant that under the constitution he could stay on to May 14 to fully complete a five-year term.

Under heavy international pressure, Haiti's Provisional Electoral Council announced on Thursday that former first lady Mirlande Manigat and popular musician Michel "Sweet Mickey" Martelly were the two top finishers in the Nov. 28 elections, and that they would contest the March run-off.

The Haitian electoral authority's announcement was in line with a recommendation by Organization of American States (OAS) experts revising preliminary results from the vote, which had originally put government technocrat and Mr. Preval protege Jude Celestin in the run-off with Ms. Manigat. The OAS electoral experts cited significant irregularities in first round vote tallies.

The latest political protest in the Western Hemisphere's poorest state, which is also grappling with a deadly cholera epidemic, came amid reports that ousted former President Jean-Bertrand Aristide was poised to return home from exile in South Africa.

Mr. Aristide, a leftist, charismatic ex-Roman Catholic priest who became Haiti's first freely elected president in 1990 and was ousted by an armed revolt in 2004, stirs strong passions in his volatile homeland.

The UN, the United States and other western donors are wary that his return home could be disruptive and divisive, especially when political passions are still running high over the disputed elections. Mr. Aristide's Fanmi Lavalas party had been barred from taking part.

Since exile is banned under Haiti's existing constitution, Mr. Preval's cabinet has said that it is ready to give a diplomatic passport to Mr. Aristide for him to come home, and his Miami-based lawyer has formally requested the travel document.

It was not immediately clear whether Mr. Aristide, whose populist rule triggered complaints of rights abuses, could face legal charges if he returns.

That has already occurred in the case of former Haitian dictator Jean-Claude "Baby Doc" Duvalier, who returned in January from 25 years of exile in France and now faces charges in Haiti of corruption and "crimes against humanity".

"The recent elections are on opportunity for Haiti to move forward. Haiti should not be kept a hostage of its past," Le Nouvelliste quoted the UN's Mr. Mulet as saying.

The return of the polarizing Aristide
April 30, 2018 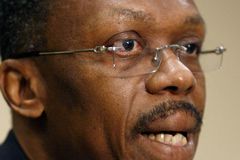