Israeli Prime Minister Benjamin Netanyahu delivered a powerful speech to the United Nations General Assembly on Monday – one of the best speeches he's ever given. It may not impress people who don't already agree with him, but its central argument will be used by supporters of Israel to pressure lawmakers in many Western countries.

Mr. Netanyahu, now in his ninth year at Israel's helm, argued that the world was facing one enormous threat – the menace of militant Islam – which is spreading like a cancer.

Who are Islamic State? Get caught up with The Globe's primer

"The fight against militant Islam is indivisible," he said. "That's why Israel's fight against Hamas is not just our fight. It's your fight," he told the international community.

The Islamic State and Hamas, Mr. Netanyahu insisted, are "branches of the same poisonous tree."

So, too, is Iran, the Israeli added, and its potential nuclear arsenal is "the gravest risk of all."

The Islamic State, also known as ISIL or ISIS, must be defeated, Mr. Netanyahu acknowledged. "But to defeat ISIS and leave Iran as a threshold nuclear power is to win the battle and lose the war."

It was a speech that mirrored one given by Mahmoud Abbas from the same podium on Friday. That speech was one of the most scathing attacks on Israel the Palestinian leader has ever given, and one of his most effective.

"In this year, proclaimed by the United Nations General Assembly as the International Year of Solidarity with the Palestinian People," Mr. Abbas began, "Israel has chosen to make it a year of a new war of genocide perpetrated against the Palestinian people." Use of the g-word shocked Israelis, and it got their attention.

For 50 days this past summer, "a series of absolute war crimes was carried out before the eyes and ears of the entire world," Mr. Abbas said, alluding to Israel's war against Hamas in Gaza and its toll of civilian casualties.

It is inconceivable, he said, that some people witnessed these things and justified them as simply "Israel's right to self-defence, without regard for the fate of the thousands of victims."

Doing so, he pointed out, ignores the "simple fact … that the life of a Palestinian is as precious as the life of any other human being."

In reply to those charges, Mr. Netanyahu declared that Israel did everything possible to minimize civilian casualties in Gaza, but that Hamas hid its deadly rockets among civilians, even amidst children, and that some civilian deaths were unavoidable.

He produced a large photograph, shot by French television, and noted two large cylinders that he said were Hamas rocket launchers, along with three kids at play.

Putting the events of the summer behind him, the Israeli leader said there now is an opportunity for peace. He called on the broader Arab world, which shares with Israel its concern over militant Islam, to help lead the way to peace with the Palestinians.

Ironically, Mr. Abbas also referenced the broader Arab world in his call for reaching a peace agreement with Israel. He noted that in a 2002 peace initiative, the Arab League said it was essential that Israel set a definite deadline for ending its occupation of all lands captured in the 1967 Six-Day War.

Such a "specific time frame," Mr. Abbas insisted, must be established if there ever is to be an agreement.

In his remarks Monday, Mr. Netanyahu rejected the idea that Israel is occupying any land. "The people of Israel are not occupiers in the Land of Israel," he said, referring to all the land from the Mediterranean to the Jordan River.

That being said, he acknowledged that any peace agreement "will obviously necessitate a territorial compromise." But such a compromise can never come at the expense of security, he insisted. By this, the Israeli means that any Palestinian state must be demilitarized and permit Israeli forces on its frontiers.

Chief Palestinian negotiator Saeb Erekat said there's a word to describe such an arrangement. He told an Israeli interviewer Monday that the Netanyahu government "does not believe in a two-state solution." It believes, he said, "in one state, two systems. The translation of this is apartheid." 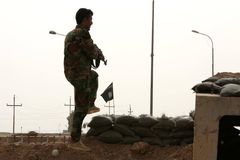