Israeli Prime Minister Benjamin Netanyahu, whose right-wing Likud party came out on top in Israel's national election Tuesday, says he expects to announce a majority coalition government of like-minded parties "in the next two to three weeks."

It will likely take much longer, however, for inflamed international tensions to cool down thanks to the Israeli leader's renunciation of a Palestinian state and his election-day race-baiting tactics.

The very policies and methods that brought Mr. Netanyahu his election victory spell serious trouble for Middle East peace, Israeli relations with Washington and the Jewish state's broader international standing. The United States and many of its allies are re-evaluating relations with Israel as a result.

Canada appears to be the exception. Prime Minister Stephen Harper tweeted Wednesday: "I congratulate PM Netanyahu on his election results. We look fwd to working w/ the gov't once formed. Israel has no greater friend than Cda."

In the last days of the campaign, trailing in the polls, Mr. Netanyahu took a drastic approach to lure right-wing supporters by recanting his 2009 commitment to negotiate a Palestinian state. And on election day, he called on supporters from the right to hurry to the polls to counter the effects of "droves of Arabs" lining up to vote.

Officials in Washington and Europe were quick to express their concern on Wednesday.

A spokesman for U.S. President Barack Obama admonished Mr. Netanyahu's party for the use of anti-Arab rhetoric on voting day. Josh Earnest told reporters that the Obama administration "intends to convey [its displeasure] directly to the Israelis."

As for Mr. Netanyahu abandoning a Palestinian-state policy strongly backed by the United States, Mr. Earnest said "the U.S. will evaluate our position going forward."

"We assume and hope that the current Israeli government's declared aim remains, which is to enter into talks with the Palestinians about a negotiated two-state solution at the end of which there will be a Palestinian state," he said.

U.S. Representative Adam Schiff, the ranking Democrat on the House Foreign Affairs Committee, told CNN Tuesday it is "hard to imagine" there would be no consequences of Mr. Netanyahu's dramatic policy reversal.

Mr. Schiff, who is known to reflect White House views, suggested the Obama administration might consider lifting the U.S. veto on some UN Security Council resolutions that are critical of Israel.

The White House already is upset over Mr. Netanyahu's provocative address to Congress earlier this month in which he sharply criticized the administration's efforts to reach agreement with Iran on the size of the nuclear program the international community would permit Tehran to have.

Palestinian leaders reacted furiously to Mr. Netanyahu's use of the Palestinian issue for political purposes.

"The results of the Israeli elections show the success of a campaign platform based on settlements, racism, apartheid and the denial of the fundamental human rights of the Palestinian people," chief negotiator Saeb Erekat said in a statement. "Such a result would not have been possible had the international community held Israel to account for its systematic violations of international law."

"Now, more than ever," Mr. Erekat said, "the international community must … rally behind Palestinian efforts" to take the struggle for their rights to the International Criminal Court and other international bodies.

After this tainted election victory, there may be fewer countries opposing the Palestinian efforts.

Diana Buttu, a Canadian-born Arab with Israeli citizenship who served as adviser to Palestinian president Mahmoud Abbas, says Israel's election confirms the country "will continue to be an apartheid state."

"It's long past time that the international community recognizes this," she said, "and responds accordingly with sanctions, boycotts and other measures."

Mr. Netanyahu has made a number of statements recently about Israel's possible relations with Arab states that share Israel's concerns about Iran's nuclear threat. Such relations will not develop, however, as long as Israel continues to occupy the West Bank and to maintain a blockade of the Gaza Strip.

Veteran Israeli columnist Akiva Eldar wrote Wednesday that when the Arab League meets later this month, it will once again discuss the Arab Peace Initiative that calls for the Arab world to fully recognize Israel once it withdraws from the 1967 territories and negotiates a solution for Palestinian refugees.

Such a relationship would indeed lead to close ties and co-operation in confronting the threat of Iran, he noted. But nothing will come of it unless Israel agrees to the creation of a Palestinian state.

Sadly, he said, it's difficult to imagine that a Netanyahu government that includes right-wing leaders such as Naftali Bennett and Avigdor Lieberman would ever agree to "evicting as much as a single house in a single illegal isolated outpost."

Should Israel continue to reject the idea of a Palestinian state, said Arab League Secretary-General Nabil Elaraby, "there will be enough pressure … Israel is going to be a pariah." 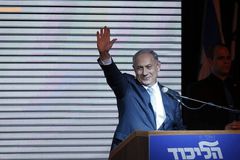 Opinion
Another round of Netanyahu – for Israelis and the world
March 18, 2015

Analysis
Canada and Israel in a deep, committed relationship
March 17, 2015 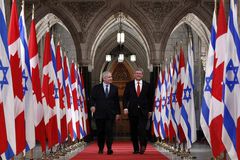