With scant support at the G8 summit, Russian President Vladimir Putin managed to derail the prospect of a statement condemning Syrian President Bashar al-Assad and left Western allies divided over how to end the conflict.

The summit concluded in brilliant sunshine at the Lough Erne Resort, about two hours outside Belfast, with a lengthy statement on the Syrian conflict signed by all eight leaders. Despite assertions by the United States, France and Britain that the Syrian leader used sarin gas on his people, the statement only called on the United Nations to investigate the use of chemical weapons in that country. It also called for a peace conference in Geneva – an idea floated last month by the U.S. and Russia – on the establishment of a "transitional governing body."

But there was no time frame for a conference and no mention of an ouster of Mr. al-Assad, a seeming diplomatic victory for Mr. Putin.

While Prime Minister Stephen Harper and British Prime Minister David Cameron hailed the document as a significant step forward, Mr. Putin remained steadfast in his support for Mr. al-Assad. Ahead of the summit, Mr. Harper had asserted Russia's isolation over Syria, saying "This is G7, plus one."

But Mr. Putin rejected that notion. "I never felt lonely and Russia never was on its own in making a statement in regard to Syria," he told reporters Tuesday, dismissing suggestions he had been isolated at the summit as Syria's lone backer within the G8. "Not all G8 members take the view that chemical weapons were in fact used by the Syrian army. Some actually agree with us that there is no proof."

He added that Russia has always believed in a negotiated solution to the conflict and he warned the West about arming rebels: Opposition forces include some of the same people who murdered a British soldier in the streets of London last month, Mr. Putin said. "If we equip these people, if we arm them, what is going to control and verify who is going to have these weapons?" he asked.

Mr. Putin is believed to have pushed hard for the exclusion of any reference of the removal of Mr. al-Assad. In the end, the statement suggested both sides at the Geneva conference should be representative of the Syrian people, signalling that members of the current government could be included. It also said all public services "must be preserved or restored," including the military and security forces. And there is nothing about providing arms to either side, something that has divided the G8; there is only a pledge to offer $1.5-billion in humanitarian aid.

Mr. Putin also hinted that Russia could start supplying more arms to the Syrian government, arguing these are sales to a legitimate government.

Mr. Cameron, who chaired the G8 meeting, saw the statement differently, noting the agreement on a transitional government indicated Mr. al-Assad has no future. "It's unthinkable that Assad can play any part in the future of his country. He has blood on his hands. He has used chemical weapons," Mr. Cameron said at the end of the summit. "I think that this is turning up the pace of the political change that's needed in Syria."

Mr. Harper said Mr. Putin was the one who made concessions. "We have a very different outcome here and a much better outcome than I thought we were going to have," Mr. Harper said referring to the agreement on Syria. "I don't think [the statement] can be interpreted in any way, shape or form as support for the current regime as it is. So I think this was a very significant move on the part of Mr. Putin and the Russians."

There is no schedule for the Geneva meeting, which has already been called off several times. Britain and other G8 countries were hoping it could be held next month, but that now seems unlikely. Many rebel forces have made it clear they will not negotiate as long as Mr. al-Assad is in place. And he has little incentive to participate while his army makes gains on the ground.

For their part, the Americans, who have committed to arming the rebels, offered a less enthusiastic endorsement of G8 meeting. "Given the various ways the G8 could have gone, we believe that on the key issues of political transition, humanitarian support and chemical weapons investigation, it's very helpful to have this type of signal sent by these eight countries," Ben Rhodes, Barack Obama's deputy national security adviser said Tuesday. 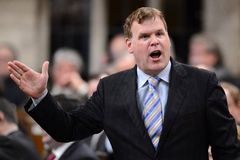 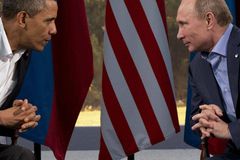 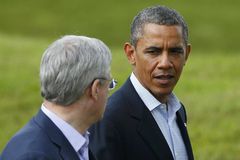 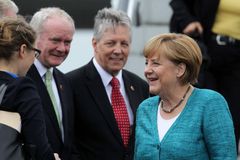