This is a tale of two heroes: two men who fought to liberate South Africa from apartheid, went to prison for their beliefs – and then took very separate paths. Theirs is the story of a once-revered liberation movement that has lost its way, tumbling into a moral crisis that threatens its own future.

One, Denis Goldberg, remains a humble political idealist after 22 years in apartheid prisons. One of only four surviving defendants of the famous trial that sent Nelson Mandela to Robben Island, he still speaks about social justice to small groups of students and activists. But he finds himself today on the margins of his beloved African National Congress, which has governed South Africa since the defeat of apartheid in 1994.

The other, Cyril Ramaphosa, is a former trade unionist turned powerful businessman, now one of the wealthiest members of the ANC's executive – and a shareholder in the Lonmin company's platinum mines in the Marikana area, where 34 protesters were gunned down by police one afternoon in August.

Both men were loyal comrades of Mr. Mandela. At the famed Rivonia trial of 1963 and 1964, Mr. Goldberg and Mr. Mandela stood in the dock together, narrowly escaping the death penalty.

But today, with Mr. Mandela retired and in frail health, the ANC has fallen into the hands of elites much closer to Mr. Ramaphosa than to people like Mr. Goldberg.

As it prepares for a leadership battle at this December's convention, the ANC is increasingly discredited not just by the Marikana massacre but by revelations of corruption, alleged political killings, business intrigues and lavish spending – including, as was revealed this month, $27-million spent on the palatial family compound of President Jacob Zuma.

Mr. Ramaphosa enjoys a $275-million fortune from his investments in Coca-Cola, McDonald's and various mining and banking companies. The millionaire tycoon, in the eyes of party elders such as Mr. Goldberg, was among the key ANC officials who ignored the injustices that led to the Marikana massacre.

"He sits on the board of Lonmin," Mr. Goldberg said in a recent speech. "Why didn't he know what was happening?"

After the disaster, Mr. Ramaphosa was contrite. He gave $250,000 to pay for workers' funerals and accepted some culpability, as his company owned 9 per cent of the mines.

It "should not have happened," he told a state radio station. "We are all to blame and there are many stakeholders that should take the blame."

Mr. Goldberg agrees that it was a collective failure, but he is clearly referring to people like Mr. Ramaphosa when he criticizes "billionaires and mine owners" on the party's executive. In his sombre recent address to a half-empty lecture room at the University of the Witwatersrand, he said his old comrades in the ANC must have known of the terrible housing and wages that sparked the Marikana strike.

"We did know and we didn't care," he said. "That's why we are responsible." The ANC has created a political elite, which, "like other political elites, use their connections for personal gain, at the expense of the majority of the people," he said.

The business empires of many ANC officials and their families have provoked national outrage. About three-quarters of South Africa's cabinet ministers have business interests, and a growing number of officials have been caught in dubious dealings.

Some of their friends are "tenderpreneurs" – specialists in winning benefits from lucrative government tenders, often via personal connections, and frequently identified with a fondness for luxury Breitling watches.

When the party decided to crack down on wildcat strikes, it was announced by Justice Minister Jeff Radebe – whose wife, Bridgette, is the head of two mining companies and an investment fund and the president of the South African Mining Development Association. Her brother is Patrice Motsepe, the owner of one of the country's biggest mining companies and a billionaire.

Mr. Zuma's family members are reported to have 220 businesses, including many established after he became President in 2009.

His nephew, Khulubuse Zuma, who has a house at the President's luxury compound in their home village of Nkandla, is the director of 26 companies. One of them was caught in a scandal over its management of two gold mines near Johannesburg, where it stripped assets and failed to pay wages to 5,300 employees.

The ANC itself has its own financial enterprise, Chancellor House, which has extensive investments in mining and energy firms, including some that do business with the government.

Much of the ANC's political support comes from South Africa's biggest trade unions, including the National Union of Mineworkers (NUM), which was headed by Mr. Ramaphosa in the apartheid era. Those unions are widely seen today as cronies of the government and the mining companies – hence the escalating wildcat strikes by workers who refuse to accept NUM's guidance.

The ANC's biggest political partner is the national trade-union congress, COSATU, which has also criticized the strikes. And COSATU's largest private donor is Mr. Motsepe, the mining billionaire, who has given about $220,000 over the past three years and helped finance its annual conferences.

Right now, South Africa's hottest scandal is over "Zumaville," the President's extravagant compound in KwaZulu Natal province, which includes chalets for his four wives and many children.

South Africans were angered when the media revealed that the compound was given a $27-million "security upgrade" – with taxpayers covering 95 per cent of the cost, plus $67-million for local road upgrades – even though Mr. Zuma already has official residences in Pretoria, Cape Town and Durban.

The government said the official costs were a state secret, since the compound was declared a "national key point" along with other presidential quarters. Legal experts said the law was unconstitutional. The newspaper that broke the story, City Press, pointed out that this was an apartheid-era secrecy law and said its use accelerated the party's "loss of moral standing."

Questionable financial dealings are not the ANC's only moral issues. There is growing evidence that party officials may have been involved in political killings.

Last month, the general secretary of COSATU, Zwelinzima Vavi, released a list of 19 politicians who were assassinated in three provinces alone. Many were killed for trying to investigate official corruption, he said.

He had earlier reported the emergence of "death squads" in several provinces, linked to corruption and the murders of whistle-blowers.

Some analysts argue that Mr. Vavi is underestimating the numbers of deaths by half.

Many of South Africa's best-known veterans of the anti-apartheid struggles have expressed their revulsion over ANC corruption and extravagance in the wake of the Marikana massacre.

Another former minister, Pallo Jordan, said Mr. Zuma has "stripped the office he holds of dignity."

Even Mr. Ramaphosa has apologized for having flaunted his wealth by bidding $2.4-million for a prize Cape buffalo cow and calf earlier this year – an incident that grabbed headlines and seemed to symbolize the ANC's disconnect from the poor. "I regret it, because it is an excessive price in a sea of poverty," he told the state radio station.

As for Mr. Goldberg, now 79, he still clings loyally to the ANC. His proudest memory is the day during the 1964 Rivonia trial when he watched his fellow defendant, Mr. Mandela, give his famous "speech from the dock," challenging the apartheid court to hang all of the defendants for their beliefs.

Nearly a half-century later, Mr. Goldberg still lives a modest life, and he still calls on South Africans to make sacrifices for their ideals, to battle for social justice and to resist the complacency of their elites. "The workers of Marikana, with all of their suffering, have created this watershed," he said in his university speech. "It's terribly important that we seize the moment and see that we need to change direction."

Then he pleaded with his tiny audience to join the battle, just as he did in the apartheid days. "A luta continua," he said, invoking the famous anti-apartheid slogan about persisting in struggle. "Let it continue. … I don't want to see what we fought for collapse." 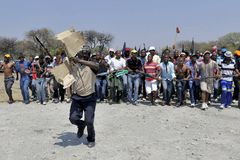 A country fractures: from the mines, a killing field in South Africa
August 16, 2012 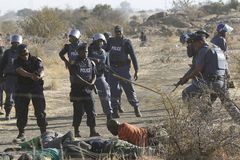