The tragedy in Charleston has turned into an unexpectedly hopeful moment for race relations in the United States.

Two good things have come out of this terrible act. First, blacks and whites in Charleston and beyond have come together in a show of unity that has inspired the nation. Second, Americans are talking with a new urgency about how to confront racism and bridge the racial divide.

The spirit of Charleston has been something to behold. Since last Wednesday's hateful attack on a Bible study group at Mother Emanuel, the historic black church in the city centre, mourners have been congregating at the church steps to lay flowers, write tributes or simply stand silently and try to absorb what happened. The scenes have been indelible. A black couple and a white couple, perfect strangers, embracing in the June heat. A young man rocking his son in a stroller with one hand and putting his arm around his wife with the other as tears roll down her cheeks. Then the triumphant reopening of the church on Sunday, with its ringing hymns and a fiery sermon.

On a Charleston bridge on Sunday night, where people linked hands to form a human chain, a woman with a beautiful church-schooled voice starts singing Amazing Grace. Hundreds join in, swaying in the warm twilight.

On the shuttle bus to the bridge, a young white man with a big beard and a fedora strikes up a conversation with a black woman in sneakers and tights. Could you have forgiven the shooter the way the victims' families did? They shake their heads together in shared astonishment at that act of grace.

Everyone at these events says the same thing: We will not be divided. If that man wanted to start a race war here, he doesn't know us. He has achieved exactly the opposite of what he wanted. Instead of driving us apart, he has brought us together. The local paper, the Post and Courier, spoke for the city with its banner headline: "Hate won't win."

Transcendent moments like this are rare and precious. Hillary Clinton said that watching the mourning parents and siblings forgive Dylann Roof was like watching Nelson Mandela embrace his former jailers.

That it is happening in the heart of the old South, in a city built in part on the proceeds of the slave trade, makes the moment especially powerful.

Whether it will last or what it means, it is too soon to say. But the potential for a country that has struggled for so long with the old scar of slavery and its aftermath is tantalizing. Local author and historian Jack Bass, who teaches at the College of Charleston, says that "it has a potential to be a turning point in race relations in this country."

The task, of course, is monumental. A chasm of attitude and circumstance divides white and black. Surveys show that black Americans are far more mistrustful of police and far less convinced the country has seen real progress toward racial equality. Black men are six times as likely as white men to be locked up in jail. The black unemployment rate is about twice that for whites.

But Charleston has achieved something important: it has started a mature conversation about race. In a powerful speech on the weekend, Ms. Clinton spoke with unusual candour about the issue. She said that race remains "a deep fault line in America." Schools are more segregated than they were in the 1960s. Black children are 500 per cent more likely to die from asthma than white children. Many white people still feel a twinge of fear when they see a young black man in a hoodie.

"We can't hide from any of these hard truths about race and justice in America," she said. "We have to name them and own them and then change them."

President Barack Obama, too, has been speaking out. In an interview released on Monday, he used an explosive word to make a point. "Racism, we are not cured of it. And it's not just a matter of it not being polite to say nigger in public," he told comedian Marc Maron. "That's not the measure of whether racism still exists or not. It's not just a matter of overt discrimination. Societies don't, overnight, completely erase everything that happened 200 to 300 years prior."

Those who drag their feet on addressing racism are missing the message of Charleston. The people who gathered to march and mourn there want something to come out of all this pain. They want to move forward to something better.

Andrea Hamilton, a black, 29-year-old hospital worker, was one of the thousands who joined the unity march at the bridge on Sunday. She is tired of the old debates, the old hatreds, the old divisions of black and white. Gazing at the friendly crowd around her, perhaps black, half white or some other shade, she said that from what she could see, "it looks like it's trying to end."

Charleston residents unite: ‘We’re not going to let this divide us’
June 19, 2015 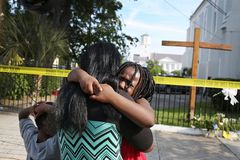 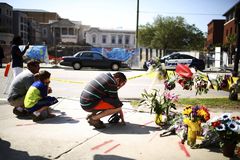