Supporters of the"Yes" and"N'o" sides rally ahead of Sunday's referendum in Greece. (Bloomberg/Reuters)


Seven years into an economic disaster and six days into financial limbo, Greeks prepare for a national referendum that could determine their place in Europe, reports Joanna Slater in Athens

Toward the back of a dingy shopping plaza in central Athens sits the shop that George and Dina Moschopoulos have run for three decades. It’s a low-ceilinged space crammed with locks, keys and safes. They sell something in short supply in Greece right now – a sense of security – and until recently, their business was doing alright.

Then the banks shut down on Monday to prevent capital from fleeing the country. Their customers, restricted to cash withdrawals of €60 a day, disappeared. Under these circumstances, “people don’t care about making keys,” Ms. Moschopoulos says. “They’re buying pasta.”

Inside the dusty little store is a microcosm of the battle playing out across Greece. Mr. and Ms. Moschopoulos, married 37 years, differ over how to vote in the nationwide referendum on Sunday. Dina, 61, sympathizes with Alexis Tsipras, the Prime Minister, who has urged Greeks to vote “No,” rejecting the bailout terms offered to the country. George, also 61, expresses disgust for Mr. Tsipras. “Lies, lies, lies,” he says.

Greece is seven years into an economic disaster that has left one in four people out of work. It is six days into a surreal financial and political limbo, where the government has stopped paying its debts, banks are closed and the country is close to running out of cash – literally. Just one day remains until Greeks will cast a vote that could determine their future within Europe. Polls suggest a cliffhanger, with voters split in roughly equal fashion between the increasingly polarized camps of “Yes” and “No.”

A crying elderly man is assisted by an employee and a policeman outside a national bank branch as pensioners queue to get their pensions, with a limit of 120 euros, in Thessaloniki on 3 July, 2015. (SAKIS MITROLIDIS/AFP)

Their choice, in effect, represents a distillation of their experiences of the last few years. Daily life has become an exercise in uncertainty, where fear, anger and a sense of humiliation are common and hopes for a better future have dimmed. For some, the situation provides a clear justification to reject the referendum; for others, it forms an equally obvious basis for supporting it.

The disagreement between the two sides extends even to the meaning of what they are voting for. The actual question on the ballot is almost comically abstruse: “Should the deal draft that was put forward by the European Commission, the European Central Bank and the International Monetary Fund in the Eurogroup of June 25, 2015, and consists of two parts, that together form a unified proposal, be accepted?”

Mr. Tsipras insists that a No vote means refusing unfair terms proposed by the country’s creditors and negotiating a better deal for Greece. It’s not a rejection of the euro, nor of Europe, he says. In advertisements, his party has framed the plebiscite in nationalistic terms: dignity, resistance, courage.

Those in the Yes camp don’t trust Mr. Tsipras and are mindful of the warnings issued by European leaders in recent days. They have cautioned that the referendum is nothing less than a plebiscite on Greece’s membership in the euro zone: in or out.

“People will have the common sense, beyond parties and beyond everything else, to say yes to Europe,” says Konstantina Micha, 55, a retired high-school teacher who is waiting in a long line to withdraw money from an ATM not far from the stadium that hosted the first modern Olympic Games in 1896. She gestures at the scene. “There are no words to describe this. It’s lower than animals. At least animals have choices – Greeks don’t have choices.”

Irene Lachana in her Pharmacy in Athens. She will vote No in the referendum on Sunday. (Angelos Christofilopoulos for the Globe and Mail)

'I want my country to be free'

In Pagrati, a middle-class neighbourhood in central Athens, the No side is winning the battle for public space. The Greek word for no – Ochi – is plastered on lampposts, on boarded-up shops, on banners. The word for yes – Nai – appears in an advertisement in a lone bus shelter.

Cash is a constant subject of conversation. Greeks wonder whether their deposits will remain intact, or whether they will suffer a haircut if the banks crumble. Some businesses – gas stations, convenience stores – have stopped taking credit cards and debit cards altogether, fearing that electronic payments can no longer be trusted. Some employers aren’t paying their employees on time, or are giving only partial salaries. Other businesses have tried to help their staff: Sklavenitis, a local supermarket chain, took the unusual step of paying wages in cash; Parapolitika, a newspaper, offered its employees a free daily meal.

On a recent morning, Liza Komini came to see her sister-in-law, Irene Lachana, who lives in Pagrati, for a cup of coffee. Both have young boys and, as the children play, the women talk about Greece’s plight and why they’re voting No on Sunday.

Ms. Lachana, 35, describes herself as someone with a leftist bent. Ms. Komini, meanwhile, used to vote for Pasok, the mainstream centre-left party. But she wearied of the scandals and the broken promises – and then along came Syriza, the upstart assemblage of leftist groups headed by Mr. Tsipras. 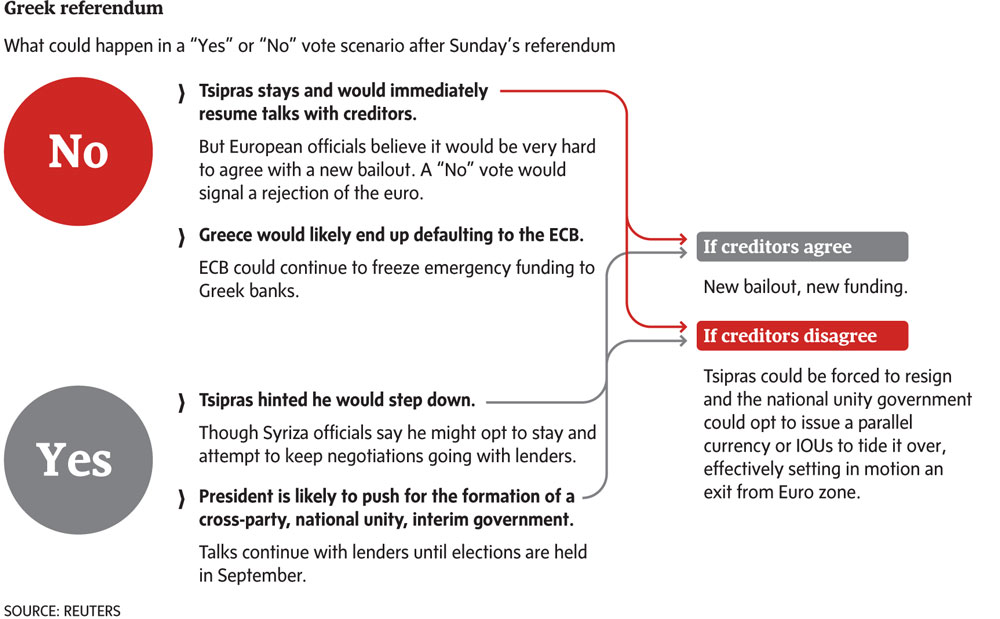 Before her son was born, Ms. Komini, now 46, worked at the National Bank of Greece. Now she takes care of him and helps her husband when possible. He runs two mobile-phone shops, where business is down 75 per cent since the start of the crisis. Keeping the stores open is a constant struggle. “We don’t know what we’re going to do tomorrow,” she says. “It’s very hard to not close down.”

For Ms. Lachana, the situation isn’t much better. She and her husband opened a pharmacy in the neighbourhood in 2006. Over the last three years, Greeks have begun to scrimp even on medicine, she says, and customers sometimes ask for a little loan to help meet their electricity and water bills.

Ms. Lachana distrusts the motivations of the IMF and European institutions. The reforms demanded by creditors – reforms detested in Greece and known as the “mnimonio” – aim to crush the country’s legion of small, family-run businesses, she says, in favour of multinational chains. The goal is to help banks, not average people, she asserts.

Sunday’s referendum is “not about whether or not we want to be in Europe,” she says, bouncing her younger son, who is five months old, on her hip. “The media and everyone else are just altering the argument to terrorize people.” (Mr. Tsipras has criticized what he called “fear-mongering” ahead of the vote).

Everyone is afraid, adds Ms. Komini. More than anything, Ms. Komini worries about the future. She looks toward her son, 6, who is wearing a toy stethoscope as he plays with his three year-old cousin in the next room. “The experts say this situation will last for 30 or 40 years. What is the future for my child in Greece?”

“I don’t care about buying clothes or going to cafes, I want my country to be free,” she says with feeling. Many times throughout history, Greeks gave their lives for freedom, she added, never worrying about something so petty as closed banks or long lines at ATMs. Ms. Komini starts to cry. “I love my country. I want to be like those people, the glory of the country.”

Moses Nahmias in his Apartment in Athens is voting Yes in Sundays referendum. (Angelos Christofilopoulos for The Globe and Mail)

A couple of kilometres away, near a grove of towering pine trees in the southeast part of Athens, Moses Nahmias, his wife Anat Soel and their two daughters live on a narrow street lined with apartment buildings. For Mr. Nahmias, the signal that things had taken a turn for the worse in Greece were the people who began coming to sift through the garbage. From his balcony, he could see them on the sidewalk below, every half hour or so, searching for scrap metal or food.

Although Mr. Nahmias didn’t vote for Mr. Tsipras, he found some things to like about Syriza: They were fresh faces, for one, untainted by corruption, and progressive on certain questions like gay rights. But Mr. Nahmias considers their negotiating strategy with European creditors dangerously misguided. A few nights ago, the couple took their daughters, 10 and 8, to Athens’ central Syntagma square to join a demonstration of Yes voters.

The referendum is a bad idea in the first place, he says. He reaches for an analogy he used recently with his older daughter. “Imagine me being very, very ill,” he told her. “Would you go to the doctor, who might recommend a difficult therapy, or do you go downstairs and ask everyone in the apartment building how they would cure me?”

Mr. Nahmias, 42, works as a production co-ordinator at the Athens Concert Hall, a partly state-funded institution, and for the last two months hasn’t received his full salary. Last year the same situation occurred for five months. This time, he says, he’s not sure if it will last for five months, five years, or whether the institution will eventually shut down altogether.

He blames Greece’s current predicament on years of corrupt leadership, aided by a population ready to believe the lies politicians tell. “There are no uncorrupt people,” he says. “Just people who didn’t manage to put their fingers in the honey pot.”

Pro-Europe protesters attend a “Yes” rally in central Athens on July 3, 2015. Competing rallies occurred in central Athens late Friday evening as Greek Prime Minister Alexis Tsipras urged thousands of supporters to vote “No” in the Sunday referendum so as to “live with dignity in Europe”.

His schedule fluctuates based on what’s going on at the concert hall; it no longer produces its own new operas, the kind of technical challenge that Mr. Nahmias used to relish. On a normal morning, Ms. Soel, 41, would have already left to open her jewellery store in an upscale area of Athens. But business has ground to a halt in recent days, so it makes little difference whether it opens on time.

She has managed to keep the store afloat thanks to constant cost-cutting and a flexible landlord. These days she fantasizes about taking her entire stock of merchandise – after all, it would fit in a suitcase – and setting up shop in some other country for a couple of years. When the worst is past, they’d return to Greece.

On social media, she says, the debate over the referendum has grown bitter and divisive. “People are really angry, friendships break,” she says. “It’s starting to become hate for the other side.”

The way the referendum has been framed is deliberate, note Ms. Soel and Mr. Nahmias. Each year on Oct. 28, there is a public holiday in Greece known as the “Anniversary of the No.” It honours the country’s rejection of an ultimatum in 1940 by Italy’s dictator Benito Mussolini, who demanded that his forces be allowed to enter Greek territory. They invaded anyway, but the heroic refusal of foreign domination still resonates deeply today. Given that backdrop, voting “yes” in the referendum is not easy. “You feel like a coward,” Ms. Soel says.

Neither Ms. Soel nor Mr. Nahmias hold hope that things will improve any time soon. Mostly they’re crossing their fingers that the situation in Greece doesn’t get drastically worse – through an upsurge in support for the neo-Nazi Golden Dawn party, for instance, or through an outbreak of political violence.

Sitting on their shaded veranda on a July morning, it’s hard to square the surroundings with the contemplation of violent unrest. The sun is shining in a powder blue sky. The pine trees are swaying in the wind. But Mr. Nahmias is blunt: “Whoever promises a good outcome for Greece in the short term is lying.”