The leader of Lebanon's Hezbollah on Monday categorically denied accusations that his group is sending weapons to Yemen or that it was responsible for an intercepted ballistic missile fired by Shiite rebels there at the Saudi capital, Riyadh.

In a televised speech from Beirut, Nasrallah said such allegations were "silly" and "completely baseless."

Saudi officials accuse Hezbollah and Iran of arming the Shiite rebels in Yemen, known as Houthis. Saudi Arabia has led an Arab coalition fighting the Houthis, with the support of Yemen's exiled internationally recognized government, since 2015 in a stalemated war that has exacerbated a growing humanitarian crisis.

Nasrallah denounced an Arab League statement issued by Arab foreign ministers who met in Cairo Sunday which described Hezbollah as a terrorist organization and blamed the Shiite group of supporting "terrorist groups" across the region and supplying them with weapons, including ballistic missiles.

"I categorically deny any role of any member of Hezbollah in launching this missile," said Nasrallah. He said that the group has not sent ballistic missiles, advanced weapons "or even a pistol" to Yemen, Bahrain, or Kuwait — the countries where the group is accused of supporting government critics.

Nasrallah denounced the Arab ministerial meeting for failing to condemn or call for an end to the war in Yemen.

He also said that Hezbollah is ready to withdraw its experts from Iraq once the government in Baghdad declares victory against the Islamic State group there.

"Hezbollah's mission in Iraq has been accomplished with the Islamic State group's defeat," he said.

Hezbollah has sent advisers and commanders to Iraq, assisting Shiite militias in their war against IS. The group has also sent thousands of its fighters to neighbouring Syria to shore up President Bashar Assad's forces.

"If there is no need for them in Iraq anymore, we will withdraw them and send them to areas where they are needed," he said.

He also said that IS's so-called caliphate has ended with the liberation of the town of Boukamal in eastern Syria. The Syrian government and its allies, including Hezbollah, declared they have full control of the town, on the border with Iraq, on Sunday.

IS militants withdrew from the town earlier this month only to return days later with a counteroffensive, ending Sunday with the government retaking the town again. It was the last major urban centre in Syria held by the extremist group, which has retreated to strips of desert along the border with Iraq and neighbourhoods near Damascus and in the country's south.

Nasrallah added that the fall of Boukamal did not mean the end of the fight against IS. "We must work to attack the remnants of Daesh because it is a cancerous entity that can return," he said, using the Arabic acronym for the group.

Nasrallah's speech comes as Lebanon faces a political crisis following the surprise resignation of the Saudi-aligned prime minister from Riyadh earlier this month. He said the country awaits Saad Hariri's return, expected in the coming days, and said that it will not regress into a repeat of its 15-year civil war.

Without naming specific countries, Nasrallah added: "You just stay out of Lebanon's business and we Lebanese will guarantee our security and Lebanon will remain a model for the region." Nasrallah said. 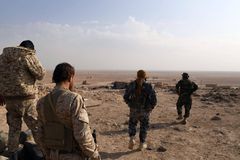 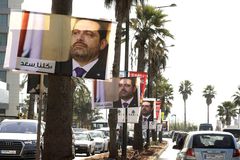 Tensions rise as Lebanon president and Hezbollah leader demand Saudis return former PM Hariri
November 10, 2017
Report an error
Due to technical reasons, we have temporarily removed commenting from our articles. We hope to have this fixed soon. Thank you for your patience. If you are looking to give feedback on our new site, please send it along to feedback@globeandmail.com. If you want to write a letter to the editor, please forward to letters@globeandmail.com.
Comments