Record-breaking Scottish cyclist Graeme Obree has given up his attempt to breach the 100 mile per hour barrier on a bicycle.

The decision comes only days before Mr. Obree was to travel to Nevada for the annual throwdown among the world's fastest cyclists. He cancelled the trip because the bike, much of which he built himself, is not quite ready for prime time, spokesman Charlie Milarvie said Friday.

The Scotsman had laid down a huge gauntlet earlier this year. "It's possible ... to do 100 miles per hour," he said in an interview this summer from his home near Glasgow.

Mr. Obree's boast brought international media attention to the obscure world of "human-powered vehicles," propelled by muscle strength alone but bearing little resemblance to normal bicycles. He planned his attempt for the World Human Powered Speed Challenge at Battle Mountain, where Canadian Sam Whittingham set the record three years ago, topping out at 133.28 kilometres per hour.

Mr. Whittingham and others involved in the sport warned that raising the record to 161 kilometres per hour, a 21 per cent jump, was setting too ambitious a goal. They respected his achievements – in the mid-1990s Mr. Obree set two world records and won two world championships – but said that the days of huge advances in the record were past.

Mr. Obree responded that he had crunched the numbers – based on "Newtonian physics ...  first principles" – and was confident 100 miles per hour is possible. But he conceded that he might not be the one to achieve it. On Friday he announced that they were now aiming for 85 miles per hour (136 kilometres per hour). This attempt, a small increase on the current record, will be done on British soil.

The rules of human-powered racing are simple. Nobody can have a motor helping them, and there's no drafting, but pretty much anything else goes.

Up to 90 per cent of cycling effort on a flat road is just pushing through the air, so competitors go to great lengths to maximize aerodynamics and the result is a race blending muscle power and ingenuity. Designers play a key role, much the way the swimsuit technology has helped shatter records or builders' efforts are recognized with the Constructors Championship in Formula 1 racing.

Over the years most riders have converged on a fully enclosed recumbent design similar to that ridden by Whittingham, the champion. It looks more like a bullet than a bicycle. Even the seams can be taped shut, leaving him gasping for air by the end of the run, in an attempt to reduce drag.

Mr. Obree chose a different design for his bike, nickname The Beastie.

Photos taken during the build show a bicycle is unlike anything most people have seen. He rides lying down, head first – essentially a skeleton bob with two wheels. A fairing will help him slice through the wind and his face will be only about 70 centimetres off the ground.

"Basically I've got a crouch position, a ski tuck position," Mr. Obree said. "My hands grabbing the handles at the side of the forks, and my chin just missing the tire, that's how close it is. And my legs straight out behind me."

It is the fairing, the skin wrapped around the bike and rider, that is posing the problems. Once they get that nailed down he will look for a suitable stretch of road in the United Kingdom for a test-run and then a record attempt. 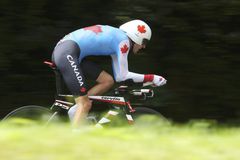 Stilwell leads a run on silver for Canada at the Paralympic Games
September 5, 2012 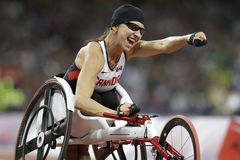