After four years, Patrick Martin returns on his 1974 BMW motorcycle to the U.S. battleground ‎states of Ohio and Michigan to see if voters' attitudes and preferences have changed as, once again, two presidential candidates are locked in a surprisingly close race.

‎First up, Ohio, because no Republican has has ever won the presidency without winning Ohio, not in 160 years.

Donald Trump is enjoying a surge in popular support and nowhere is that more evident than in Ohio, one of the handful of battleground U.S. states that will make or break the fortunes of the Republican nominee for president.

With almost seven weeks left before voting day, and a trio of face-to-face debates on the horizon, Ohio and the overall race are likely to see more fluctuations. But, if history is any indication, the race in Cuyahoga County, a sprawling, heavily populated county that includes greater Cleveland, may be cause for concern in the Clinton campaign.

The first thing to remember is that no Republican candidate has won the presidency without winning Ohio and its 18 Electoral College votes – ever.

In 2012, when I last rode into the state to report on a presidential election, the race between the incumbent Barack Obama and his Republican challenger Mitt Romney was surprisingly close. Democratic organizers said the race in Ohio would depend on how well the Obama team got out the vote in the African-American community, especially in Cleveland. Then, there was no question that African-Americans pretty much unanimously supported Mr. Obama. The only question was how many would turn out to vote.

At the end of the day, Mr. Romney won all but 16 of Ohio's 88 counties but still lost the state – the President won the popular vote because his 16 victories came in most of the state's urban centres. In Cuyahoga, the get-out-the-vote campaign proved to be a success as Mr. Obama won an unprecedented 69 per cent of the ballots.

Today, it is said that Ms. Clinton is hemorrhaging votes in white working-class communities to an even greater degree than did Mr. Obama. And if the former secretary of state is to win in Ohio, as well as in the country, she must a) hold on completely to the African-American vote captured by Mr. Obama, and b) make inroads among college-educated Republicans to offset her losses in the white working-class communities.

I rode into Cuyahoga County last week expecting to find both the black community solidly behind Ms. Clinton and widespread defections from suburban Republicans who don't like Mr. Trump. I found neither.

Westlake, an affluent community of some 35,000 people west of Cleveland, is as Republican as Cuyahoga County gets. In 2012, Mr. Romney lost in Cuyahoga over all, but he won big in Westlake.

It's a funny thing – for a country that fought a war to free itself from England, Americans still find a certain appeal in things English. Whether in Kansas or in Ohio, it seems axiomatic that the greater the number of streets with quaint English names, the higher the number of Republicans you will find.

So how do these Republicans feel about having Mr. Trump as their party's candidate for president – sour enough to cross over and vote for Ms. Clinton? That is what Democratic organizers hope will be the case.

I came across Bob West cycling on Oxford Circle. Mr. West, 67, a retired businessman, said Mr. Trump was, indeed, not his first choice as the Republican nominee, but he'll stick with him.

"I supported Marco Rubio," Mr. West said, referring to the conservative Florida senator who was among the last to drop out of the Republican race. "I admit I was surprised that Trump won. I think even Trump himself was surprised.

"And no, I don't like all the things I've heard coming from his mouth," a reference to the nominee's seemingly racist views and to the possibility of someone shooting Ms. Clinton. "But a lot of those things were taken out of context by the media trying to make trouble for him," he argued.

"It's Hillary who worries me," Mr. West added. "I don't trust her, nor her husband. She'd say anything to get elected.

"But the most important factor for me is that I don't want her appointing the next four Supreme Court judges," he said. "They would have power long after she is gone."

Over on Bishops Gate Circle, a road on which many of the houses boast a front-lawn flagpole flying the star-spangled banner, a thirty-something woman out walking her dog told me she had actually voted for Mr. Obama in both 2008 and 2012, but would be supporting Mr. Trump this time. Really?

"I just think it's easier for Congress to pass things if there's a Republican in the White House," she said, declining to give her name. (She did allow that her dog's name was Lola.)

But what about the idea that Ms. Clinton would carry on the Obama policies?

"I have different concerns now," she said, explaining that she and her husband have their own commodities trading firm. "I'm concerned about small-business issues. There are too many regulations, too many taxes," she said. "Trump will change things."

Don Richards, 83, was one of only a few people I encountered who said he would not support Mr. Trump. "People in Westlake are very much Republican," he acknowledged, "but Donald Trump scares the people in my particular community – senior citizens.

"We don't like either candidate," he added, "but Hillary is the lesser of two evils."

In nearby Crocker Park, a brand new, made-from-scratch shopping, dining and residential community made to look like small-town America at the turn of the last century, Gina Rae, a forty-something resident, was finishing a late breakfast at one of the "town's" boulevard cafés. Ms. Rae has always voted Republican, she said, and sees no reason to change now.

"I don't like some of the things he says," she admitted, but said she dislikes Ms. Clinton even more.

"I don't want her continuing Obama's policies," she emphasized. "He's the one who divided this country and triggered a lot of racial confrontations. I really believe that."

Ms. Rae said both she and her husband are small-business owners – she owns two hair salons that employ 30 people, and her husband's copier sales company employs about 60 people.

Mr. Obama's policies "have made life very difficult for people like us," she said. "All our tax dollars are going to pay for programs to support people out of work. All that does is encourage more of them to stop working."

If Ms. Clinton is thinking she can pick up suburban votes here, she'd better think again.

Opinion
Is there anything Trump can do or say in the debate to lose support?
September 25, 2016 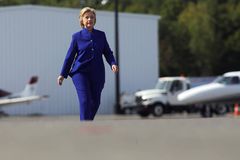