With Donald Trump's remaining rivals bowing out of the race, clearing his path to the nomination, Hillary Clinton is looking for ways to woo Republicans turned off by the brash billionaire.

The Democratic front-runner's campaign believes Trump's historically high unfavourable ratings and penchant for controversy may be enough to persuade a slice of GOP voters to get behind her bid, in much the same way so-called Reagan Democrats sided with the Republican president in the 1980s.

As Trump stood alone on Wednesday after Texas Sen. Ted Cruz and Ohio Gov. John Kasich ended their bids, there were some early signs that a sliver of the party might see Clinton as the only option.

Democrats caution their effort to win over Clinton Republicans — or Hilla-cans — is in its earliest stages, but could grow to include ads and other outreach targeted in particular at suburban women in battleground states. Already, aides say, a number of Republicans have privately told Clinton and her team they plan to break party ranks and support her.

"Let's get on the American team," Clinton said, making an explicit appeal to independents and Republicans, in an interview with CNN on Wednesday.

Hoping to hasten any move to her side, her campaign on Wednesday released a list of Republicans vowing never to vote for Trump along with a web ad featuring clips of prominent GOPers, including his former rivals, bashing the New York billionaire in every possibly way.

"He needs therapy," says former Florida Gov. Jeb Bush, at the end of the spot.

While such bipartisan support would expand Clinton's base of potential voters, a series of high-profile endorsements from Republican officials could dampen enthusiasm among some in her own party.

For months, primary rival Bernie Sanders has criticized Clinton's record from the left, highlighting her 2002 vote in favour of the war in Iraq and support from Wall Street. The Vermont senator won the Indiana primary Tuesday, demonstrating her lingering weaknesses within her own party.

Trump's campaign has also made a conscious effort to target Independents and Democrats in the primary. He's said he expects to win a portion of Sanders' support thanks to their shared positions on trade and outsourcing.

"We have tremendous numbers of Democrats that have voted for me," he said, in a Tuesday morning interview on MSNBC. "Hundreds and hundreds of people were coming in that were registered Democrats that wanted to vote for Donald Trump."

Clinton has begun casting her candidacy as an effort to unify a divided country. After a series of victories last week, which all but ensured she will capture her party's nomination, Clinton called on Democrats, independents and what she called "thoughtful Republicans" to back her bid.vs

But even though a vocal segment of the Republican Party has denounced Trump, so far few have been willing to go as far as saying they would back Clinton in the fall.

Ben Howe, a Republican strategist who has worked for Cruz, said he'd be actively working against Trump — a decision he recognizes means backing Clinton.

"Anything right now that would allow Donald Trump to become president is the wrong move, so the de facto result is that Hillary would win," he said.

Endorsements from prominent GOP backers could potentially pave the way for Republican voters to back Clinton, particularly woman.

"Educated, suburban white women are turned off en masse and there will be more of that," Ohio Sen. Sherrod Brown, a Clinton backer, said of Trump. "In the Columbus suburbs, she's going to do very well."

A February poll of likely Republican voters commissioned by a Democratic firm led by Stan Greenberg, a former pollster for former President Bill Clinton, found that 20 per cent of Republicans are "uncertain" whether they would back Trump or Clinton in a head-to-head match-up.

There is some irony in Clinton playing the role of a unifier: She's long been one of the most divisive figures in American politics.

For some voters, that leaves them feeling like they have few good options.

Amy Bishop, 42, a stay-at-home mom from Indianola, Iowa, said she wasn't sure how she would vote. She said she would "most likely" go for Clinton over Trump, but stressed that she wasn't "100 per cent."

"I don't feel like she's honest and upfront," said the self-identified independent. Of Trump, she said, "I think he's very reactive."

Tracey Kingery, a Republican from Des Moines, Iowa, said she, too, was unsure about how to vote.

"I think he seriously would go half-cocked on everything. He's a little too hot-headed for me," she said. But, said the 47-year-old, "there's been too much negative stuff about her."

How Donald Trump beat his rivals in the Republican race
May 4, 2016 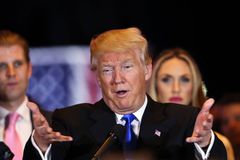 Trump, Clinton: And then there were two (almost) Subscriber content
May 4, 2016 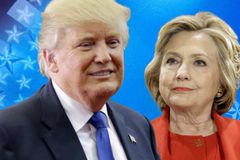