When Ciaran O'Driscoll watches the results come in from Friday's referendum on same-sex marriage in Ireland, he'll do so with one eye on the national total, and the other on the count in a tiny fishing town on the island's southwest coast.

The overall result, of course, is most important. With opinion polls suggesting the Yes side will win comfortably, Ireland looks poised to become the first country in the world to legalize same-sex marriage via a nationwide vote.

But Mr. O'Driscoll – a 28-year-old PhD student at University College Dublin who is campaigning for the Yes side – will also be looking to results in Castletownbere, the village of just over 800 people where he spent the first 18 years of his life. Like many who grew up gay in conservative rural Ireland, Mr. O'Driscoll only came out about his sexuality after he left Casteltownbere to go to university. It took him another year before he was ready to tell friends and family back home.

"If they voted yes, it would mean everything to me," Mr. O'Driscoll said. "I'm very proud of where I call home and if I'm lucky enough to find that one guy for me, I want to be able to hold my head high as I walk down the roads that were my childhood with my head held high knowing my home has voted yes to me and my happiness."

Opinion polls put support for the Yes side at around 70 per cent nationally, a result that would be remarkable in a country previously known for its deference to the teachings of the Catholic Church. There's little question which side will prevail in Dublin, where both sides of the River Liffey are festooned with rainbow flags ahead of Friday's vote.

But it's less certain that smaller, more conservative communities like Castletownbere are ready to embrace changing the constitution so that marriage is defined as between "two persons without distinction as to their sex."

The referendum campaign is leaving deep and very personal bruises on both sides of the argument. Yes campaigners say they've been forced to tolerate an upsurge in public expressions of homophobia. People on the No side claim they have been made to feel their honestly held opinions are illegitimate.

Mr. O'Driscoll, a lean man with shy mannerisms and a neat brown beard, has taken the emotionally draining step of campaigning door-to-door in Castletownbere, a place so small that most people know him and his back story before he says a word about the referendum. While many of his former neighbours have been receptive, he has also had to bite his tongue while people he's known all his life explain to him why they'll be voting against his right to a legally recognized marriage.

"It's worn me out," he confesses, slumping into a chair after another day on the campaign trail, a Yes Equality button pinned to his chest. "The language and the people constantly questioning my worth and value to society."

The No side, meanwhile, complains that – with all four of Ireland's main political parties supporting the Yes side, as well as much of the country's media – their arguments aren't being given a fair hearing. "No nation on Earth does groupthink quite like the Irish. We decide on a particular dominant narrative, and we fall into line. That was probably true of our Catholicism in the past, and now a certain political correctness has crept into the zeitgeist," said Michael Kelly, editor of The Irish Catholic, a newspaper that has published editorials supporting the No side.

Believing that the polls are wrong and many Irish quietly oppose changing the definition of marriage, the No campaign has printed thousands of "Don't be silenced" posters in the campaign's last days.

Ireland's bishops, who initially seemed reticent to take a high-profile role in the campaign, have also waded in more forcefully in the final few weeks, using their sermons and pastoral letters to call on believers to protect the existing definition of marriage.

While the influence of the Catholic Church was badly damaged by a series of sexual abuse scandals in the 1980s and 1990s, the bishops' intervention may still be having an impact in rural areas. One opinion poll published this week suggested the share of decided Yes voters had fallen from 60 per cent to 46 per cent in rural areas (versus 29 per cent No and 25 per cent undecided). If there's a surprise No vote on Friday, it will be because Ireland's countryside reverted to its conservative form.

Recriminations are rising among those battling for the rural vote. Yes campaigners resent having to listen to some of the No side's arguments that they consider offensive – particularly the suggestion that children need to be protected from the possibility of having two same-sex parents. "They accuse us of being intolerant of their intolerance," sighed Eoin Wilson, another Yes side campaigner who grew up in rural Ireland.

Mr. Wilson, a 32-year-old political aide who hails from a middle Ireland farming town called Ballyragget, says he felt "socially radioactive" while growing up. He recalls being teased about how he walked and how he talked, and feeling isolated from his family and friends. He eventually fled to Dublin so he could live an openly gay lifestyle.

Mr. Wilson is optimistic about the national result but, like Mr. O'Driscoll, he'll also be watching to see whether his hometown's 1,450 residents vote Yes on Friday.

"It would mean an awful lot.…Ballyragget is the place where I went to extreme lengths to hide myself. The idea that it's now open, everybody knows, and nobody particularly cares is revelatory to me," Mr. Wilson said, anticipating a Yes vote. "It feels for a lot of gay people that society is finally coming to terms with us and saying you're okay."

Irish support for same-sex marriage a questioning of faith as referendum looms
May 17, 2015 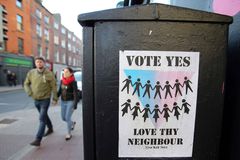