They swore while taking oaths of office, used an old slur for China, pledged allegiance to a "Hong Kong nation," and tore up ballots in a vote for president of the city's Legislative Council.

Two years ago, the Umbrella Movement brought downtown Hong Kong to a standstill with a 79-day protest. Hundreds of thousands of people took to the streets, but failed to achieve any political change.

Now, the movement has arrived in the Legislative Council as a new, if small, political force that promises similar tactics to upset the city's democratic civility. This week, six new young "localist" candidates incited legislative havoc as they mixed oaths with loud protest against China.

What happened this week "may give us a taste of what will happen in the following four years," said Eddie Chu, dubbed "king of votes" by local media for winning more ballots than any other openly elected legislator. Hong Kong newspapers have warned of looming "war" in the city's legislature that will create "unprecedented paralysis."

The new era of emboldened political dissent is not confined to Hong Kong. In Taiwan, President Tsai Ing-wen this week called on Beijing "to face up to the reality that the Republic of China exists." It was a provocative challenge to the so-called 1992 consensus that there is only one China.

The new willingness to bluntly question Beijing's pre-eminence presents one of the most serious affronts to Chinese dominance in recent history, a blowback that has expanded amid efforts by President Xi Jinping to exert a stronger grasp over the territories China considers its own.

"The people who live in Hong Kong and Taiwan enjoy the freedom they have had, and they don't want to lose it. And Beijing is a very clear and imminent threat to that freedom," said Wu'er Kaixi, a student leader during 1989 Tiananmen protests in China who now lives in Taiwan, where he has run for office.

China has responded with anger and confusion. "The mainland and Taiwan belong to one and the same China whose sovereignty and territorial integrity brook no division," Foreign Ministry spokesman Geng Shuang said this week.

Hong Kong "is a special administrative region of the People's Republic of China," he added. "This is crystal clear, without any doubt and subject to no change."

Even advocates for the city's autonomy would, for now, agree that change is not imminent.

They recognize that their numbers are too small to achieve much in policy, much less attempt to change the Basic Law, the constitution set in place by China. Instead, they intend to wield and gain influence by obstruction.

"The best we can do is to put things on hold," said Mr. Chu, who wants to "be more pro-active in every battle of the policy struggle." Success could be defined, he suggests, by halting approval of the city's budget.

A journalist and an activist, Mr. Chu is personally emblematic of the disruption his election poses to the system. For a month, he and his family have lived under 24-hour police protection after he received death threats and reported cars tailing him.

"That's saying something about the current situation in Hong Kong," he said, faulting powerful business interests allied with Beijing.

The election of Mr. Chu and the others constitutes a "transitional period" for Hong Kong, said Chan Kin-man, an associate professor of sociology at the Chinese University of Hong Kong.

When China said in 2014 that it would continue to preselect who would be on the ballot for Hong Kong's chief executive, the country's top political position, it did not just spark the Umbrella street protests, Prof. Chan said.

When they failed, he himself began to feel that "if the government doesn't fulfill its responsibility of giving people democracy, then people have no obligation to be loyal to the country."

It has bred "new tactics of resistance," he said. "These New Turks believe there is no use in being so gentleman-like and statesman-like. They only take as a platform to sow their resistance to Beijing."

It's an idea that resonates with the young people who sat for days on Hong Kong streets in 2014, surrounded by umbrellas.

"The new legislators can make it harder for the government and pro-establishment to quietly do whatever they want," said Joey Chan, who was a law student during the protests. Devoted to the cause, young and passionate, they "can make big changes," he said.

That is not to say their strategy is without risk. Filibuster the budget and they can raise their credibility in some quarters. They may also provoke wrath.

"The public will become very angry if some of these very basic things are not done," said Albert Ho, a former legislator with the city's Democratic Party.

He said it was "quite unfortunate" that the city's young new legislators had resorted to swearing and theatrics "to express their strong dissatisfaction with the system."

A feeling that the time has come to fight back "is the political and social reality we have to face," Mr. Ho said.

Chinese observers see things very differently. The Communist Party-run tabloid Global Times said in an editorial this week that it hoped the ripples in Hong Kong would calm before they "become a damaging force worthy of creating worry for the country."

The one-country two-systems formulation that governed the handover of Hong Kong to China remains in place, the paper noted. Plus, pro-Beijing forces inside the city's legislature – only part of which is voted in by the general public – remain in the majority.

"The power of the country is very strong, and the positive power of Hong Kong society is also still very strong," the paper wrote.

It added: "No matter how eye-catching the turmoil, it cannot prevail over the restrictions under a formula well-proven by history."

Those who want more freedom from China must confront numerous challenges.

Many in Hong Kong have strong personal connections to China, and a heavy economic dependence on the mainland.

The new young legislators have important policy differences among themselves, too, and even greater disagreement with other, older, pro-democracy legislators. To be effective, they need to find ways to work together, which may not be easy as they clash over ideology and tactics, in hopes of growing their numbers in 2020, in the next set of elections.

"It is a very critical four years for us," Mr. Chu acknowledged. "If we one day can get the majority, that will be the time when Beijing will finally sit down with the democracy camp and talk about their system design." 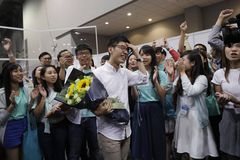 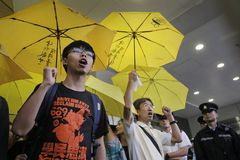 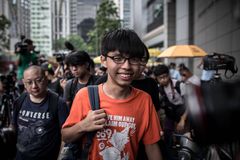 Hong Kong protest leader defiant as he turns himself in to police
January 16, 2015 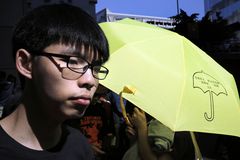