Its conflict with the Palestinians notwithstanding, Israel faces a challenging array of domestic problems. Prominent among these are the simmering tensions between ultraorthodox and secular Jews.

The former have exercised what many see as disproportionate political power and a de facto veto over key social and educational policies. Not only are most ultraorthodox Jews – the Haredi – exempt from military service, but less than 40 per cent of adult males actually work. With family sizes typically running to eight or 10 children, the ultraorthodox birth rate is a potential demographic and economic time bomb.

Israelis signalled their frustration in the last election, when it elected 19 representatives of a new party, Yesh Atid, to the Knesset. It is now part of Benjamin Netanyahu's coalition government. Among the leaders of its reformist agenda – the first American to hold office in Israel in three decades – is Rabbi Dov Lipman, an ultraorthodox educator who moved to Israel in 2004.

If ultraorthodoxy means someone who is anti-Zionist, anti-education, anti-work force and only wears a white shirt, black pants and black hat, then I am not ultraorthodox. But if it means complete devotion to traditional Jewish law, then I am ultraorthodox. I come from the yeshiva world [institutes of learning where students study sacred texts]. The real disagreement has to do with being part of the broader society or being isolated. But throughout our history, our greatest rabbis worked for a living and were educated in worldly matters. The yeshiva world we have today is a new phenomenon, which resulted from a fear of secular Zionism. But secular Israelis no longer constitute a threat. No one is trying to make anyone less religious. And it's time for us in the ultra-orthodox community to say we can be part of Israeli society: learn general studies in school, serve in the military or in national service, and join the work force.

What's the impetus for this?

Three things. One is economics. It's not sustainable – to have such a large community essentially supported by those who work. If you ask what are the greatest threats to Israel, this is the greatest internal threat. Twenty years from now, the ultraorthodox will be a huge percentage of the population. At a certain point, they'll be a majority. And you can't have a situation where, as an ideology, that community neither works nor serves in the military. Then, there's the unity perspective – the resentment of the ultraorthodox because they are not contributing. That is also a threat, because you can't have a society with that degree of polarization. The third level is spiritual because many young secular Israelis are completely turned off religion because they see it as corrupt, milking the government for funding, and they see none of the beauty. They say to me: "I hate Judaism and I hate that I hate Judaism." So the goal is to create a society where the ultraorthodox do contribute, do pay taxes, do serve in the military and in the work force. That shift would reawaken secular Israelis, not necessarily to become religious, but to be proud Jews.

How big is your emerging bloc of like-minded thinkers?

I can't put a number to it, but it's a lot larger than I thought it was. People are reaching out from all over. One example: A mother called me from Bnei Brak [an ultraorthodox suburb of Tel Aviv]. She said she had eight sons, only one of whom was perhaps a genuine scholar. She didn't want the other seven to be impoverished and, more importantly, she did not want them to lose their ultraorthodoxy. She wanted them to be committed, but also able to play guitar or kick around a soccer ball and ultimately go to work. In her eyes, that's what I and the party represent. Since the election, I've been approached by mostly younger rabbis who want us to help them start ultraorthodox yeshiva high schools, yeshivas for army service. Rabbis tell me that 20 per cent of their youth have no interest in continuing that path, and that up to 60 per cent of yeshiva students don't really belong there.

What is the first practical goal?

To set up yeshiva high schools that teach a broader curriculum. Seven are starting in August, with full government funding. Why am I so comfortable with it? Because I experienced it in America. I saw that you could have both general and religious studies. Our Baltimore yeshiva produced scholars of the highest level, while attending university. Not only is it not a contradiction – they enhance one another. Once they experience that in Israel, it will pick up steam. It might take a generation or two, but my dream is that Israel will be full of ultraorthodox doctors, lawyers, and high-tech entrepreneurs. We are also starting a post-high school yeshiva for Haredim in partnership with the army. It's a four-year program. The first two years they'll learn Torah and study a technical trade. The second two years, they'll serve in the army by day and study Torah at night.

Some of these Haredi must hate you, because you're using your knowledge of Jewish law to undermine their positions.

I was on an ultraorthodox radio station and callers were attacking me, saying: "Where do you get this stuff about being able to study and work at the same time?" And I quoted Maimonides [the medieval astronomer, philosopher and rabbinical sage] – I actually had it with me. Maimonides says: Anybody who chooses to study Torah, and forces others to support him, which is essentially what is happening in Israel, that person brings shame to God, disgraces the Torah and has no portion of the world to come. They said: "You're quoting from a thousand years ago?" But if that's their only answer, we can do this just by getting the message out.

You seem like a nice American boy. Are you tough enough for Israeli politics?

My original goal was not to be in the Knesset, but to help shape party policy. I didn't think I was up to the task, both in terms of my Hebrew, and in terms of the political culture. The Hebrew media calls me the gentle American, but I've learned when to be not so gentlemanly.

So the Palestinian conflict aside, does that make you Israel's most important politician?

CNBC did an article in which they called me perhaps the heart and soul of the Yesh Atid movement, and I was stunned by it. But I understand where that came from. Because if it were just secular, then it would be easy to dismiss. But because I'm ultra-orthodox myself, we are breaking down barriers. I always say: "If you want to fight for 500 years we can, but we will destroy ourselves, socially and economically." If we are not unified within, we will fall apart.

In Egypt, plenty of protests but few alternatives to Morsi
Subscriber content
June 28, 2013 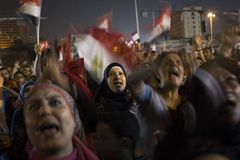