Once close to extinction, South Africa's first people have a new claim on life

The San people have lived in what is now South Africa for thousands of years, but colonialism pushed them to the edge of extinction. Now, the success of a long-delayed but crucial land claim is giving them a way forward, Geoffrey York explains

With a practised eye, Blade Witbooi glances at the faint marks in the sands of the Kalahari desert. "Zebra," he murmurs. Then he spots the spoor of a large antelope and a smaller creature. "Eland," he says. "Yellow mongoose."

These are the tracking skills that allowed his people, the San, to survive as hunters at the southern tip of Africa for thousands of years. Those skills nearly vanished forever when European colonialists pushed the San close to extinction. Apartheid perpetuated the oppression. But today there is a glimmer of hope for the embattled culture of South Africa's most neglected people.

Here in one of the most remote corners of their homeland, in a vast landscape of camel thorns and rolling dunes, a successful land claim has allowed some of the San to find a path out of poverty. Economic development, primarily in tourism and hunting, is helping the San to make a tenuous recovery.

The land claim, though long-delayed and only partly fulfilled, has been crucial. On their newly owned farmland on the Kalahari's edge, the San now run a 6,000-hectare commercial hunting ranch, where they take clients on walk-and-stalk hunts of wildebeest, springbok, oryx and hartebeest. It allows them to preserve their ancient way of life while still earning commercial revenue.

Mr. Witbooi, 44, grew up under apartheid as a labourer on a white-owned farm. But from the age of 13, his uncles taught him the ancient art of tracking and hunting. Today he works seasonally as a guide on the community-owned hunting farm here. He shows the hunters how to track animals, make bows and arrows, and gather medicinal plants.

"We tell them a lot about our plants, our insects, our nature," he says.

"Our community is in a better condition now, because we can do our own thing, on our own time. We're in charge of our own land now. It makes a huge difference. I'm very happy with it."

The San – sometimes called the Bushmen, a term that Mr. Witbooi prefers – were the earliest inhabitants of South Africa. DNA evidence suggests their existence can be traced back 140,000 years here. Some of their languages, famous for their unique and intricate clicks, are said to be 25,000 years old.

Over millenniums, the San developed a rich culture of hunting rituals, spiritual ceremonies, complex rock paintings and trance-like healing dances. Their art has been found on cave walls and rock faces all over South Africa, showing the vast range of their ancient homeland.

But after the Dutch colonialists arrived in the 17th century, the San were decimated by disease and deliberate extermination raids. Accused of cattle-stealing, they were killed in legally permitted hunts until 1927. As recently as 1936, San people were taken to Europe and displayed at public exhibitions, where sightseers gawked at their small bodies and animal-skin clothes. Like the aboriginal people of Canada and other countries, they were marginalized on remote land and excluded from political power.

By the end of apartheid, most San had been pushed to the farthest extremities of South Africa, where they lived in shacks, without electricity or running water. They were evicted from their traditional Kalahari land to make room for a wildlife park, and their communities were ravaged by alcohol and unemployment. (Larger communities of San have survived in Namibia and Botswana, although many in those countries too have been forced off their traditional land to make room for wildlife parks for tourists.) 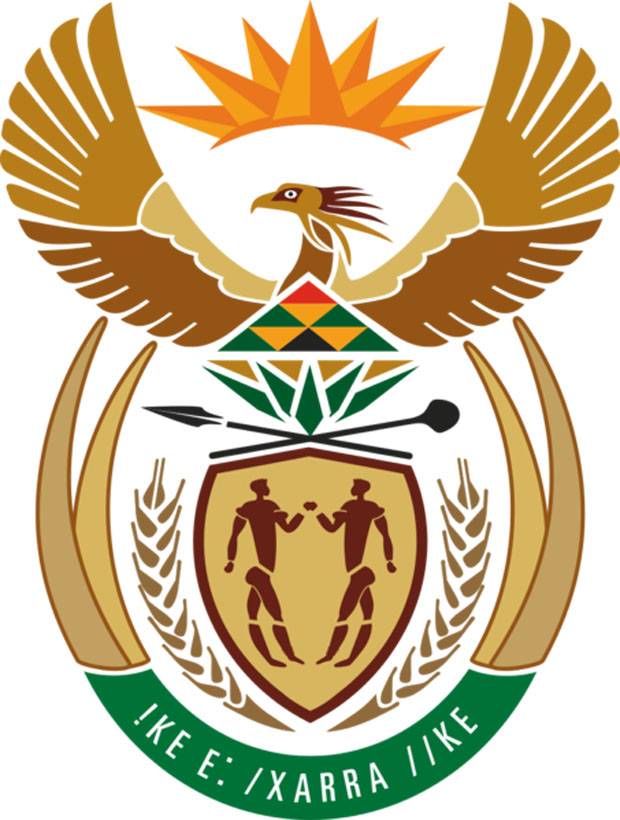 After apartheid ended, the African National Congress government created a new national coat of arms, borrowing San rock-art figures as the central image. Underneath the two San figures is a motto, in an extinct San language, that can be translated as: "Diverse People Unite." (It is usually rendered this way: !ke e:/xarra//ke. The government has published a guide to the pronunciation of the phrase, explaining that part of it sounds like "a sheep bleating.")

The San phrase and imagery in the coat of arms is stamped on every South African coin – a remarkable admission of the centrality of the San people in the country's ancient history.

Yet this symbolic gesture is politically empty. None of the San languages are among the 11 official languages of South Africa, and the government refuses to recognize them as the country's first people. Officially, they have been lumped together with the pastoral Khoi people and categorized as the "Khoisan" – an overly broad grouping that encompasses many distinct identities. Most have remained in deep poverty in the hot and dusty Kalahari, without basic services and almost no formal education.

The San filed their Kalahari land claim in 1995, shortly after Nelson Mandela became South Africa's first democratic president. Four years later, the government approved the claim. They were given 25,000 hectares of land inside the wildlife park where they once lived, plus 40,000 hectares in six farms near the impoverished settlements where about 1,000 San people now reside. They were also given hunting and cultural rights to their historic sites in the park.

The settlement was meant to include financial resources to help the San administer the land. But despite a lengthy court battle, the government has refused to provide them with an adequate budget for their land. Even after winning their land claim, the San couldn't afford transport to travel the 60 kilometres to the park where they historically lived. Two decades after their land claim, more than half of the original claimants have died.

"The Bushmen are one of the most beaten people of South Africa," says David Grossman, an ecologist who has helped the San in the land claim. "They literally had their culture beaten out of them. And they were neglected in the post-Mandela era."

As they struggled to develop their hunting ranch, San were forced to depend on donations from philanthropists to stock their farm with game animals and to pay for their staff. But now that could finally be changing.

This year, with better marketing, the hunting ranch has earned the equivalent of about $77,000 in revenue – four times more than when it began a few years ago. The farm provides five permanent jobs and a dozen seasonal ones for the San, and allows them to run "bush schools" to teach hunting and tracking skills to their children.

"It makes a lot of difference," says Luce Steenkamp, manager of the Bushman Council Office that runs the farm. "Some families don't have anyone who brings in income. But during the hunt, they have people who can get income. If it wasn't for the hunt, they wouldn't get anything."

Katrina Koper, a San woman who has worked as a ranger at the hunting farm for the past five years, says the hunters often ask her who owns the farm. "I tell them, 'It's our farm.' They don't believe us. It makes me feel happy and strong. We've had lots of projects and none of them made it, but this one will make it. I can see it."

The San are aiming to acquire more land and animals, so they can expand their hunting operation. They are also developing tourist lodges on their land in the Kalahari park, although so far those lodges have provided relatively few jobs for the San.

At the national level, President Jacob Zuma has pledged to "redress the injustices of the past" by introducing a law to recognize the Khoisan communities and leaders. The Khoisan were "the most brutalized by colonialists who tried to make them extinct," Mr. Zuma said in a landmark statement in 2012.

That legislation was finally brought this year to a parliamentary committee, which has begun travelling across the country to hold public hearings. But these have been a reminder of how the indigenous people remain neglected today. The parliamentary committee failed to provide copies of the bill at the hearings, failed to arrange translation for Khoi and San speakers, and even failed to show up for a scheduled hearing in one city because of a mistake in its flight booking.

More significantly, the government has flatly rejected the idea that the San should be recognized as the first peoples of South Africa, even though historians agree they were the first.

In a speech in 2001, when he was deputy president, Mr. Zuma declared that the Khoisan were "the first indigenous people of our country." Yet now the government has reversed this stand, telling the San and Khoi that they cannot be given "first people" status – apparently because it might undermine the status of other South Africans whose ancestors arrived later.

"The fact that you were first in Point A doesn't mean that you are a first person," said Richard Mdakane, an ANC member who heads the parliamentary committee on the new bill.

"People always went up and down [the continent], because they were pastoralists, many of them," he said in an interview. "Generally they are African people, all of them, who have been on this continent for thousands of years, who moved up and down, depending on the weather conditions."

There can be "first peoples" in North America and Latin America, but not in Africa, he said. He cited a report by an African Union commission – appointed by African governments – that rejected the concept of "first inhabitants" and described all Africans as indigenous. An indigenous right to self-determination could be a threat to state sovereignty, the report said.

Many San and Khoi people are outraged that the government has rejected the "first people" claim without even listening to submissions at the public hearings. Emotions have run high at the hearings.

"How do you get a foot in the door in your own house?" he shouted angrily at a parliamentary hearing in Upington, near the Kalahari region.

Blade Witbooi believes his ancestors may have been the first humans on the planet. "This was always my big question to my friends, to our elders," he said. "Are the Bushmen the oldest people in the world?"

He might not ever settle the global question. But in his homeland, he knows the answer. "South Africa is my home," he says. "And the Bushman are the oldest."