Kenyan President Uhuru Kenyatta might be facing trial in The Hague on charges of crimes against humanity, but to his millions of supporters he remains a hero.

In their version of events, he is a humanitarian and an innocent victim of a vast Western conspiracy. "He was saving lives," insists Dan Kamau, a member of the President's Kikuyu ethnic group, surrounded by a group of approving friends in a Nairobi city park. "He was providing a police escort for aid to displaced people."

The International Criminal Court (ICC) has a thick file of evidence to the contrary, alleging Mr. Kenyatta financed death squads in the bloodbath of violence after the 2007 election. But the question now is whether his case will ever be aired in court. With his mounting political power and his skill at gaining leverage from domestic supporters and foreign governments – including Canada's – Mr. Kenyatta has become the biggest threat to the ICC in many years.

Votes from millions of people like Mr. Kamau helped him win Kenya's presidential election in March despite the ICC indictment. Since then, he has gained key gestures of international acceptance, and no arrest warrant has been issued by any of the countries he has visited.

If he is able to keep defying the ICC, he could inflict heavy damage on the court's credibility and influence, analysts say. The case could eventually crumble, showing that the ICC is powerless against a popular president. The ICC is already under frequent attack in Africa because of a perception that it unfairly targets Africans for prosecution, and a defeat in the Kenyatta case would be a further blow to its legitimacy.

Portraying himself as indispensable to the West's strategic and business interests in East Africa, the new Kenyan President was rewarded with quick invitations to London and Cape Town, and an early visit from Canadian Foreign Minister John Baird.

Britain, which had threatened to limit itself to "essential contact" with Mr. Kenyatta if he won the election, soon reversed itself and invited him to a conference on Somalia this month. He was also welcomed on visits to South Africa and Ethiopia. And at a summit in Addis Ababa this week, the African Union is asking the ICC to drop its prosecution of the President, allowing Kenya to handle the case instead.

Eager to promote Canadian business and human-rights interests, Mr. Baird was among the first Western leaders to visit Kenya after Mr. Kenyatta was sworn into office, although he did not meet the President. His visit to Nairobi on May 14 was so early that he met his Kenyan counterpart, Amina Mohamed, several days before she had even been formally sworn in as Mr. Kenyatta's foreign secretary.

"Canada is keen to explore opportunities to realize the full economic potential of trade with Kenya and the East African Community, especially for Canadian natural resource companies, which are becoming leaders in the Kenyan mining and oil and gas industries," Mr. Baird's office said during his visit.

Mr. Kenyatta's visit to London was even more significant. Despite his status as an indicted suspect in crimes against humanity, Mr. Kenyatta was welcomed by British cabinet ministers and even by Prime Minister David Cameron (although Kenyans later complained that he was denied an official photo opportunity with the British leader). It was considered a major diplomatic coup for Mr. Kenyatta.

"Everyone else charged with crimes against humanity by the ICC has been arrested on sight and locked up to await trial," said Richard Dowden, director of the Royal African Society, a London-based organization. "But instead of slipping on the handcuffs, Mr. Cameron grasped Mr. Kenyatta warmly by the hand and welcomed him to London."

The only other sitting president to face charges of crimes against humanity is Omar al-Bashir of Sudan. But while Mr. al-Bashir is a pariah to the West and can only travel to a limited number of countries for fear of arrest, Mr. Kenyatta and his government are openly courted by Western leaders, implying that national interests can trump justice.

Mr. Kenyatta's vice-president, William Ruto, is facing similar charges of crimes against humanity at The Hague in connection with the same post-election violence. Officially, both say they are "co-operating" with the ICC. But their supporters are doing their best to undermine the ICC and destroy its case.

The Kenyan government, in which Mr. Kenyatta was deputy prime minister before his election victory, has refused to provide key documents that the ICC has requested for the past three years. Witnesses have mysteriously disappeared or recanted their testimony, and some have been subjected to intimidation and attempted bribes, the ICC's chief prosecutor Fatou Bensouda says.

The ICC has been repeatedly forced to postpone the trial dates for the Kenyan leaders. And a senior Kenyan diplomat has sent a 13-page letter to the UN Security Council, demanding the cancellation of the case. He warned of the danger of violence in Kenya and neighbouring countries if the case continues.

"The petition argues – incredibly – that Kenya would go down in flames if he was forced to go on trial," said Makau Mutua, chairman of the Kenya Human Rights Commission. "The message is clear – leave us alone, or we'll set the place on fire." 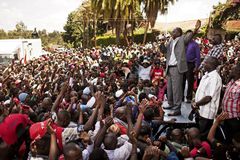 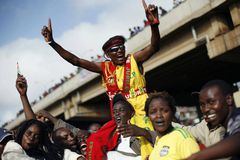