More than 24 hours after he was chosen to be Zimbabwe's next president, Emmerson Mnangagwa still has not surfaced into public view. He is operating deep in the shadows, where he has always felt more comfortable, while his proxies do the work for him.

Mr. Mnangagwa, a former spy chief and guerrilla fighter, has not been visible since his military allies seized power in Zimbabwe nearly a week ago. Yet the ruling party has already installed him as the successor to President Robert Mugabe, the man who has dominated Zimbabwe for the past 37 years.

Until Monday night, Zimbabweans did not even know if Mr. Mnangagwa was in the country. Then, army commander General Constantino Chiwenga disclosed in an evening speech to the nation that the former vice-president is still outside the country, where he had fled when Mr. Mugabe sacked him two weeks ago – but is "expected in the country shortly."

Opinion: Mugabe is not leaving without a fight

The full story of what brought Mugabe down, and why he didn't see it coming

The Zimbabwean military is seeking the cloak of legitimacy as the next step in its carefully planned takeover. But the swift and unanimous moves by its political loyalists in recent days are evidence that the post-Mugabe government will be as authoritarian as the Mugabe regime, even if it is likely to be slightly more pro-Western and business-friendly.

A meeting of the ruling party's central committee on Sunday showed no sign of dissent or genuine debate. Sweeping changes to the party's leadership – including a decision to dump the man who has ruled the country for nearly four decades – were approved in barely three hours of discussion.

The enemies of Mr. Mnangagwa were denounced as "criminals" and "a wicked cabal" and expelled from the party. It had all the atmosphere of a purge at a Soviet Communist meeting – an echo of the party's long-standing reliance on a Communist organizational structure headed by a central committee and a politburo.

Hundreds of thousands of Zimbabweans, exhausted by a decade of economic chaos and poverty, have exuberantly cheered the military and rallied in the streets to urge Mr. Mugabe to resign. They have revelled in their new freedom to criticize the 93-year-old autocrat. And they have new hope for an improvement in their battered economy.

But every indication from Zimbabwe's political and military elite is that the coup is simply replacing one faction in the ruling party with another. The personalities will change, and there will be some changes to economic policy, but the heavy-handed methods of running the country will remain.

Mr. Mugabe's eccentric behaviour and his efforts to cling to his official title have obscured the central reality: The ruling party, ZANU-PF, has moved on from him, adopting a new strategy for safeguarding its power.

The party is already promoting a glib message of "national unity" and a "new era" for the country – with itself still firmly at the helm.

This new strategy will allow the ruling party to rebrand itself as slightly more liberal and modernized, helping Zimbabwe attract new international loans and development aid, while ensuring that the party maintains its monopoly on power.

Opposition parties have been hoping to gain cabinet seats in a coalition or transitional unity government. But the leaders of ZANU-PF have rejected this possibility, making it clear they intend to keep full power despite replacing Mr. Mugabe.

"What we are doing is an internal matter for ZANU-PF," said Patrick Chinamasa, a minister in the Mugabe cabinet and a senior member of the ruling party.

"Why would there be a government of national unity when we are in power and we have the majority?" he asked. "It is nothing to do with the opposition parties. We are the ruling party, and we have an overwhelming majority in parliament right now."

The strategy is clear: the party and the military have decided to get rid of Mr. Mugabe (along with his unpopular wife, Grace, and her allies) to burnish their image and improve economic policy. And this means that they will continue to exclude other parties and rig elections.

"We are in charge," said Home Affairs Minister Obert Mpofu, another senior party member. "ZANU-PF is in charge of the country, ZANU-PF is running the country."

Since the coup, the party has done nothing to apologize for its decades of economic mismanagement and political repression. It has even praised Mr. Mugabe, saying his only mistakes were after the 2013 election, when he became surrounded by politicians loyal to his wife.

At the next national election, in the first half of next year, the party's election platform will be simple: It will campaign against Ms. Mugabe and the "cabal" that surrounded her. This was confirmed by Chris Mutsvangwa, the influential war-veterans leader and strong supporter of Mr. Mnangagwa who has played a key role in the events of the past week. It is certain to be a winning message for the party, since Ms. Mugabe is widely disliked across the country for her lavish spending and insulting political attacks.

As for Mr. Mnangagwa's insistence on remaining in the shadows: the party has no problem with his disappearing act. It even compares his invisibility to the tactics of the guerrilla wars of the 1960s and 1970s.

"He is a disciplined cadre," Mr. Mpofu said. "He has been under a barrage of negative forces, but he kept quiet because of the grounding that we had during the war." 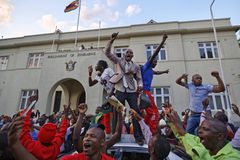 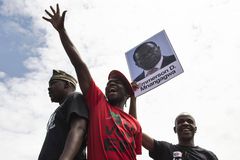 Opinion
Mugabe is not leaving without a fight
November 20, 2017 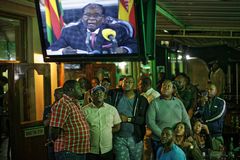