The rush is on to help survivors of the Nepal earthquake with food, water, shelter and medical help.

Eight million people, or a quarter of the population, have been affected by the 7.8-magnitude earthquake that has killed more than 5,000 people. The death toll is expected to climb.

Once again, the international disaster response system goes in to high gear and faces a test: getting aid on to the ground and distributing it to more remote parts of the country, and helping put Nepal on the path to post-disaster recovery.

Here is a look at some of the lessons learned from past disasters – and how they could impact the Nepal response in the coming days, weeks and months.

The international airport in a disaster-affected country is often the main hub of activity when it comes to receiving and distributing aid.

Cargo flights land, aid is unloaded and moved off the runway, and the next flight is cleared for landing.

Last month, the World Food Program (WFP) – which is currently leading and coordinating the logistics of the entire aid response – opened a humanitarian staging area at Tribhuvan International Airport in Kathmandu as part of its work with the Nepalese government to prepare for a large-scale emergency. That work was years in the marking.

"[With] an earthquake you can't really predict when it's going to happen, obviously. But we did have an understanding that [Nepal] was prone to earthquakes, so we needed to be prepared and work closely with the government to have a staging area at the airport," she added.

The staging area is 650 square meters of covered storage area, or enough for up to four planeloads of cargo – and is aimed at getting aid prioritized, on to trucks and on the road as quickly as possible, said Ms. Marshall.

Without local groups to work with, massive aid efforts can go badly.

What happened to aid arriving in Haiti after the 2010 earthquake serves as a cautionary tale.

"The tsunami of aid arrived at the airport and couldn't get out," recalled Professor Jose Holguin-Veras, a disaster relief expert at Rensselaer Polytechnic Institute in Tory, New York. He has carried out post-disaster field work in Japan, Haiti and Chile.

The Haiti quake had decapitated the country's government and without local groups to coordinate with, the aid filled the warehouses and tarmac of the airports, explained Mr. Holguin-Veras.

It didn't help that many people also donated "nonsensical" items totaling up to 50 per cent of the total cargo – winter clothing, costumes, tuxedos, wedding gowns, expired food and medication, and sex toys – which were of little use to Haitians and instead took time to sort and needed space at the airport, added Mr. Holguin-Veras.

Local community groups are key: they provide the manpower to distribute goods.

Mr. Holguin-Veras illustrates his point with the example of a Latin American group of professional disaster workers.

After distributing two tons of relief supplies, the satisfied aid professionals travelled to the Haiti-Dominican Republic border to cross over and purchase more supplies, he recalled.

"When they got to the border, what did they find? They found all the supplies that they had distributed were on sale at the border," he said. The workers chose to buy back the supplies – and this time linked up with local Haitian churches to ensure that the supplies went to people who needed them most, he added. "You need to involve the local groups."

The Pakistan earthquake of October 2005 that killed more than 75,000 people posed similar challenges to what aid agencies are facing in Nepal.

The earthquake happened in a mountainous area, knocked out roads, and made it difficult to reach those affected.

Dr. Lynda Redwood-Campbell, a Canadian Red Cross medical doctor and McMaster University professor who has worked in some of the biggest natural disasters for more than a decade, remembers the difficulties well. She was there working in front-line medical care in Pakistan-controlled Kashmir in the wake of the earthquake.

The answer at the time was to reach survivors by air, but that too had its challenges.

"Sometimes the only way to access these communities is by helicopter and helicopters are very dependent on weather," she recalled, adding that poor or foggy weather could postpone flights.

"The concern in Pakistan was that people weren't even getting basic supplies like blankets and tents and that was a concern because it was quite cold," she said.

In Nepal, the WFP-led relief effort hopes to have access to two helicopters in the coming days to deliver food aid and supplies.

Nutrition and not just food

The World Food Program is distributing high-energy wheat-based biscuits to earthquake survivors. The biscuits are fortified with vitamins and minerals and are high-protein.

The international agency did something similar during the typhoon Haiyan response in the Philippines in November 2013.

This is a change from the past when the humanitarian groups would have delivered uncooked rice.

"These are perfect for this kind of response where there's no clean drinking water, no cooking utensils, people in general have lost everything. But these cookies will give you all the nutrients that you need for that day," said WFP's Canadian spokesperson Julie Marshall.

Lacking proper nutrition could stunt physical and mental development. With that in mind, the biscuits are aimed at children and pregnant women – although they are distributed to all survivors.

"Looking over the last 10 years, one of the things we've learned is that it's not just about getting food in to peoples' hands, but nutrition is vital. And the most vulnerable are the women and children," said Ms. Marshall.

"Coordination – that would be the big lesson of Haiti. Haiti was a disaster upon a disaster," said Canadian doctor Dr. Lynda Redwood-Campbell, who worked there in the aftermath of the 2010 earthquake. "There was a complete lack of coordination with foreign medical teams. Everybody and everybody's cousin seemed to be there internationally. There was no good overarching coordination," she added.

That experience resulted in a global initiative that is being developed with the help of the World Heath Organization. It aims to improve coordination of foreign medical teams during a large-scale natural disaster, said Dr. Redwood-Campbell.

Foreign medical teams pre-approved by the WHO can register with a local authority and outline the medical services they are in a position to provide – whether it's a rapid deployment field hospital or a basic health unity, she added.

In turn, governments requiring urgent help in a disaster situation can quickly decide which foreign medical teams they want to reach out to. It has been used in the Philippines during typhoon Haiyan in November 2013 and the West Africa Ebola crisis.

"It's still new, it's still being piloted but I think there's a very strong understanding that those of use who do humanitarian response on a regular basis realize that this is a problem," said Dr. Redwood Campbell.

The aim is stop the flow of foreign medical teams showing up unannounced.

"Even with all my training I would never go by myself and just show up at a site. When you're in a disaster setting, you have to be completely self-sufficient otherwise you're a hindrance to everybody. You have to have your own water supply, your own food, your own shelter, and all your supplies, and if you don't have that you shouldn't be there," she said.

There are two stages following a disaster – the disaster relief response which focuses on saving people who may be trapped under rubble, delivering water, food and shelter to survivors, and preventing a disease outbreak like the cholera cases following the Haiti earthquake. And then there is the long-term response, according to Dr. Lisa Ficklin, a disaster management expert and lecturer at the Humanitarian and Conflict Response Institute at Manchester University.

She studies the gap between the two stages.

As a situation moves from disaster to reconstruction – or from the first to the second stage – a gap develops. Less money and resources flow, and fewer people are involved in reconstruction.

A disaster-affected area that got global headlines can suddenly fall off the radar, she explained.

"We're hearing less and less about Port-au-Prince with every year and because of the increase of occurrence of disasters it's never too long before there's another event to grab global attention," she said.

The long-term response is not what it could be.

"And that's not just trying to take, as in the case of Haiti, Port-au-Prince back to where it was before the earthquake. But it's trying to bring in levels of resilience and levels of development so that it's trying to improve the situation and create a less vulnerable context for possible future disasters," said Dr. Ficklin. 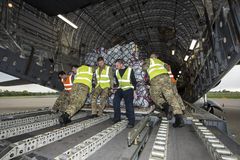